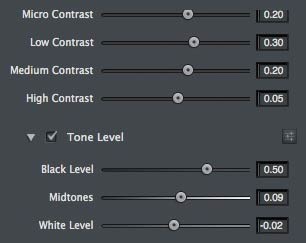 Interface
Topaz has a nice slick and easy to understand user interface. It gets easily installed as a plugin, opening in the Filters > Topaz folder. Is remarkably straightforward to use and with a no nonsense approach, containing just the right amount of features and spacing between them. At first glance, the similarities between Lightroom leap out; its neutral grey surface and panels seem like a replication, but then again this is perhaps not such a bad thing.

So what exactly does it do?
Topaz allows you to increase contrast and clarity by modifying an image by altering it in four distinct zones – micro contrast, low / medium / high contrast. Then there is then a separate Tone Level section, which allows the adjustment of blacks, midtones and whites, to help add a bit more bite and intensity to these adjustments.

There is also a Hue Saturation Luminosity section, a very powerful feature that is also found in Lightroom, which allows individual adjustment of colours and their brightness.

Playing with the sliders overall, the effect does seem rather aggressive at first, but with a little subtlety to these changes it’s easier to feel in control. I chose a daytime image suffering from reduced visibility problems and the conditions were easy to improve and the software easy to steer.

The micro contrast and high contrast sliders provided greater control over these troublesome areas globally, or applied with a brush, feeling very familiar to Lightroom 4 / 5 once more. Although the tone level section is quite useful, at this point I started to question what I was actually doing here. Surely this is something that I would perhaps already do in Lightroom before Topaz, or something I would do afterward in Photoshop?

I didn’t find the Collections panel to be of much use. There a number of presets to get you going, but the concept seemed to be a little  pointless from the scenic perspective, where conditions constantly vary.

For Varying Levels... Don't Forget
Programmers and software houses have to think multi ability and multi platform. I found that many of the features within Topaz were already to be found in Lightroom and Photoshop, or easy enough to apply, but was this aimed at the already knowledgeable?  I remember the early days of vacant monitor staring, or frustrated ‘expeditions’ into the manual and I would have killed to have Topaz Clarity to end the frustration.

Many people who undertake their first journeys into image processing, have absolutely no idea where to start with a problem like clarity. It is for this reason that Clarity can sit comfortably and familiarly in the plug-ins folder, giving an answer to those who see the complexity of an extensive Photoshop world as a creative hindrance rather than asset. The control of halos was also particularly good. There was a lot of emphasis on this particular feature and I found this to be well justified.

If you already familiar with many extensive Photoshop techniques, what contrast masking, luminosity masking and creation of extensive selections, then this plug-in is not going to be that much use to you. Where it does excel is providing a one-stop shop for those who prefer a more convenient approach to image editing. The software can certainly solve the problem its title addresses, but it’s something I can easily replicated in the software I already have.

Overall, a competent plug-in, which is familiar, well designed and powerful. It will greatly assist those beginning their first forays into the digital darkroom.