I’ve been working in the photographic industry for over thirteen years, ten of them as a full time professional and like you I read reviews of cameras, lenses and photographic equipment. In this decade, never has their been such a low point, such a deluge of uneducated comment box limelighting as there is in today’s online reviews of camera equipment. Many are so uneducated, they leave you convinced they are the contrived prepaid rival company assaults, causing customer confusion with a slurry of infantile ‘it doesn’t do exactly what I want’ idiocy. Sadly, many online reviews are no different than a continuation of the one-liners these self appointed experts attempt to highlight. The first to publish sets a precedence and a wave of copies are born as one lazy reviewer after another copies the same sentiment. Aside from the tech spec, the underlying objective is to provoke. Many have had their hands on the camera for just two hours, testing its capabilities with an oh-so-energetic office window carpark shot. Many are try to ignite an advertising sponsered viral controversy by using weighty metatitle phrases such as ‘bitterly disappointing’, ‘miserable battery life’ and ‘an industry fail?’... and then give it 4/5 stars. Confused? Don't be.

The Canon EOS RP was a classic example of this. The launch of a compact 26mp full frame camera, weighing 480g with a price point of just £1300 attracted a lot of attention... and then it all began, months before anyone had even seen the camera. ‘Loser camera of the year’ - ‘an all time low’ - ‘Canon RIP’ etc. Had anybody held one at that point? Anyone actually used one? Anyone even shot any good landscapes with it, or even a picture outdoors? Of course not. Anyone actually thought about Canon’s commercial step with this unexpected about-face idea? Don't be daft. It had not even been released and the RP was sunk before the launch, by self apointed experts bad mouthing a few jpegs and a specifications sheet, all expecting a pro-version of the EOS-R. Reviews and news are rarely about the product anymore - it's mainly about Google Analytics and satisfying their paying advertisers. So let’s get down to business and uncover why controversially the RP is currently selling faster in Europe than it can be made (at the time of writing) and examine some company fundamentals, by discussing the reason to manufacture cameras and how it is up to us to adapt. 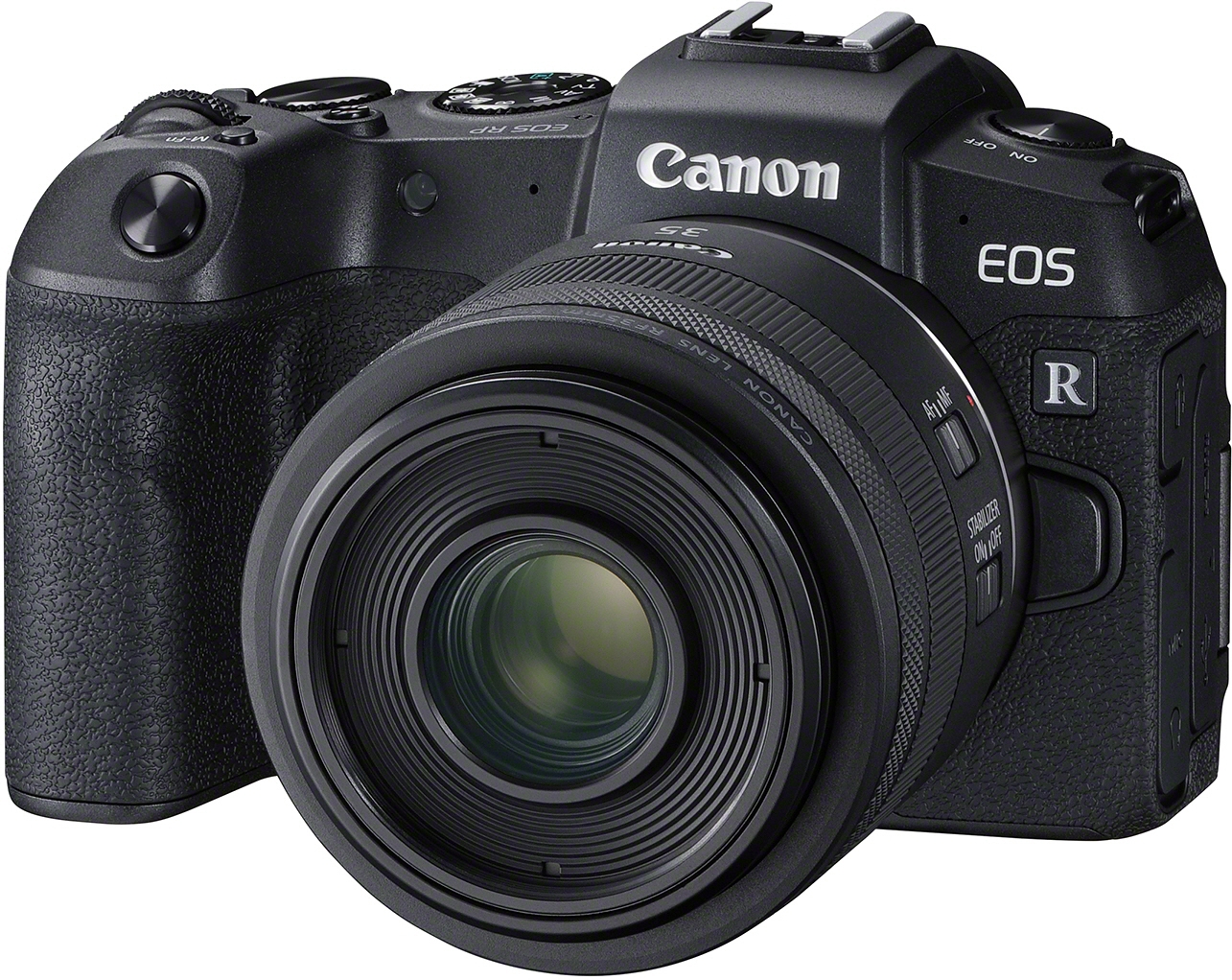 Cameras are split into two very obvious primary categories - outdoor and action. From this, subcategories are then generated that will fit the majority of our photographic requirements, but as expected, these do overlap. In the category ‘Outdoor’, there are subcategories; these are landscape photography, travel photography, people who go on holiday with a camera. In ‘Action’ these are subdivided into sports photography, press photography, wildlife photography, but then also people who photograph their kids, their pets - people who photograph for fun (..err what?)… A fundamental ethos of manufacture is ensuring product overlap, manufacturing a camera that suits ‘most’ of your needs. This allows the user to adapt the menus and subsequently diversify into other subjects. A classic example is the Canon 1Dx I bought, which in 2013 became my arctic / night time weapon of choice.
“You’ve only shot five hundred images with this camera in five months?”, said a Canon executive to me in Patagonia.
“ Yes, it’s for night photography”, I replied.
“ Wow, most 1Dx users will have hit that on their first day!”
The camera was such a brilliant overlap for me. With a sensible 18mp, it has a great ISO range, great weather sealing and amazing autofocus. The overlap saw many landscape / wildlife shooters follow suit, but it also catered for extreme environments, no matter the subject.

Now consider portrait photography. It’s actually a combination of both primary categories, requiring the technical attributes of both. There are also many other subject overlaps that manufacturers must consider, like macro photography for example. Many know that I use a Canon EF 100-400 f4L IS exclusively as a macro lens, with both full frame and crop cameras. Who would have thought it was such an incredible close-up lens. Engineers made the close focusing around 900mm; add a 1.4xIII extender and you have a 560mm close-up lens, with beautiful focus fall off, that focuses as close as your foot! You see, it’s overlap that counts here, overlap and adaptation.

So to conclude my point, the camera you own sits in a primary category, but remember that a secondary category will never become primary. You will never see a landscape photography camera. Landscape photographers are delusional, most thinking that they are the largest reason to create a camera. Not so. After lengthy conversations with sales staff / executives / camera stores owners, lengthy and sporadic conversations that have spanned many years, may I reveal that the largest purchasing category is rather surprisingly ‘people who go on holiday with a camera’. Yes that’s right, all those cheaper lower end budget crop sensor bodies are utterly essential to every camera company.

Features, firmware and menus are designed for our adaptation. You will find menu items that allow you to set up the camera to suit most of your photographic requirements, but it will never satisfy them all. So, when looking at a new camera, it is important to examine the manufacturers fundamentals, the reason to manufacture a new camera. Can I remind you, what is their primary reason? To SELL the camera. That’s right, it’s a business. Market research into creativity and sales potential leads companies to development, which leads to product design, prototypes, programming, manufacture and then product launch - but remember product diversity sits at the forefront of this thinking or the camera will never sell.

Now let’s consider some game changing cameras over the last 15 years - The Canon 5D (the first affordable FF), the Canon 5Dmk2 (1080p video that spawned the birth of the camera video industry), the Nikon D800 series (dynamic range game changer) , the 1Dx (autofocusing from the gods), the 6Dmk1 (WIFI and GPS for just over a grand), the Sony A7rII, the Fuji XT range… there are more without a doubt, but all those cameras have been pitched at an identified market, a market requirement and the camera has met that requirement, but (and its an important ‘but’) there will always with some level of shortfall - there has to be. They also opened a door to incredible new creative possibilities and it is this dizzy excitement we crave with every release, but it doesn't happen very often.

The shortfall is an inevitable compromise brought on by cost, size, purpose and more importantly physics! No matter how much I humorously request Canon develops me a 16-500 f1.4L TSE pancake lens, I have succumbed to the likelihood that my one lens solution will never appear. Sometimes this dream technology isn’t possible, or it just doesn’t work properly, or perhaps it has already been developed, ready for release in a few generations time - to keep the company alive. May I repeat, the primary company objective is to sell cameras.

But the gathering crowd are hungry for a lynching, they’ve read the prelaunch, they’ve read the specifications sheet and they’re poised for a 4k attack. Features are mocked, lines are drawn and then it begins. Points spiral out of context, descending into ugly personal attacks and the whole ludicrous mess wobbles off axis, leaving 1655 comments of pushing, shoving and jostling - a showdown faeces flinging shit-storm that advertisers absolutely relish.

Attempting to shame any manufacturers at the earliest possible point, without actually experiencing the product in the hand and then waxing indignantly online, is not only dumb, but it’s an deeply uneducated insult. In fact if you could summarise this article into one statement it would read, ’please shut your online mouth about camera kit until you have actually experienced it’.

Have you ever looked inside a camera or seen a dismantled lens for that matter? I have and it’s unbelievable. The intricacy, the nanotechnology design? The construction is literally unfathomable and mostly taken for granted. Do you actually understand how a sensor works? How a sensor is even made? It’s utter magic but remember encapsulated in this creative freedom is business magic, sat alongside.

So it’s deep breath time, hands together time, eyes open, now watching the ludicrous results of click bait with a wry smile; a new business mindset. Our specific creative needs are not the primary reason companies make cameras, they are a parallel reason. It is up to us to adapt these products to suit our ever changing creativity and we can if we explore our own photography. There are no crap cameras in 2019. Manufacturers give you the keys to this adaptation; you need to work the menus and settings around some restrictions. You need to become Jason Bourne, to be able to dismantle and put it all back together with your eyes shut, to react instinctively behind the camera with such direction, such drive, a harmony of equipment, intention and moment, with literally any camera….or alternatively just buy more gear and then slag it off online to reach that illusive sense of completeness.

As for the EOS RP, finally let me enlighten you that this camera is a business explosion. I have been told recently they cannot ship them fast enough for UK sales (although sales have now stabilised in Japan). This little camera overlaps into so many categories and it is this that has captivated my attention, just like the EOS M3 which I still use to this day. I have sold so much work with the M3 over the past few years because it allows me to react quickly, quicker than any system I have used and I believe I have found an RF full frame equivalent. The RP is a super lightweight full frame camera created to fulfil a market of users wanting substantial quality in a small, lightweight and ultimately affordable package with some stripped down lower spec video, in case you need it. This excites me and I have now been considering an EOS RP, RF24-105 and 100-400 f4L IS as my primary lightweight landscape / travel setup, weighing just over 3kg! Of course it wont have every professional feature, of course it’s not for sport photography and of course it has limits, but this is set at a a great price point. If you follow popular sites, you will no doubt notice it has been badly beaten up, but now I hope that you understand it’s all for show, for controversy. Let’s look past this.

Trust reputable reviewers, choose your sources carefully and ignore the journalistic progeny of an ugly decade of comment box soapboxing.