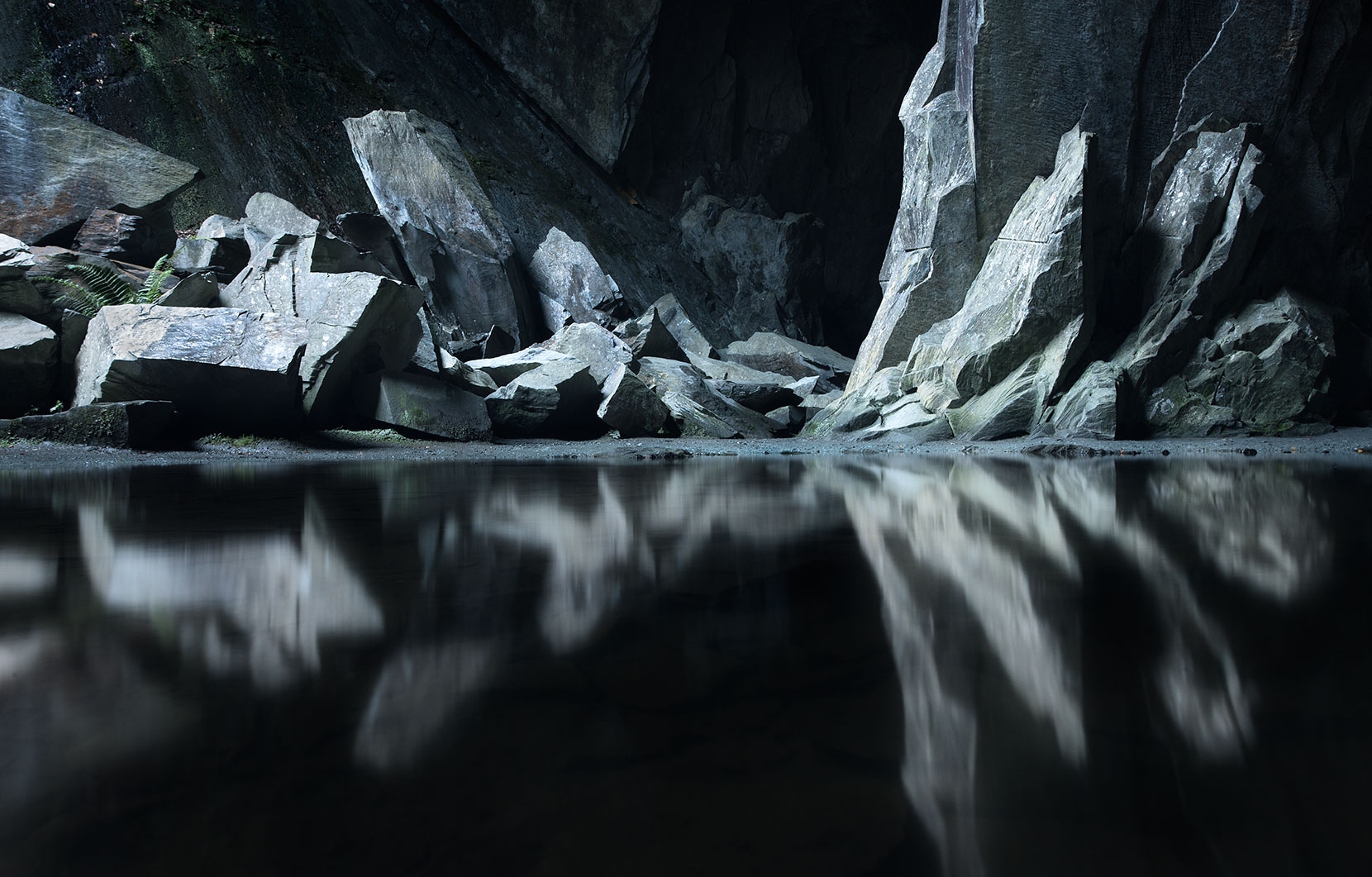 The Lake District has been in news more than ever over the last few months but sadly for all the wrong reasons, so I wanted to write something positive about a little place I know, a place that’s underground and that you can visit too. I spent a week hiding from torrential rain last November – when I say rain I mean 24/7 torrential rain, which forced me to hang out in damp quarries in the daytime, listen to lots of classic pop songs at night and even  shoot some rolls of film, in an attempt to keep connected to the art.

I want to take you back to 2011 when I first found this remarkable place. I had heard about slate cave with legendary acoustics, a cave with a ‘window’ and a ‘swimming pool’ but nothing quite explains just how remarkable this Lakeland location is until you visit. Cathedral Quarry is located in the shire of the Little Langdales, to the north of Hodge Close, an unlikely name for a slate quarry, sounding more like the cul-de-sac where your gran lives. 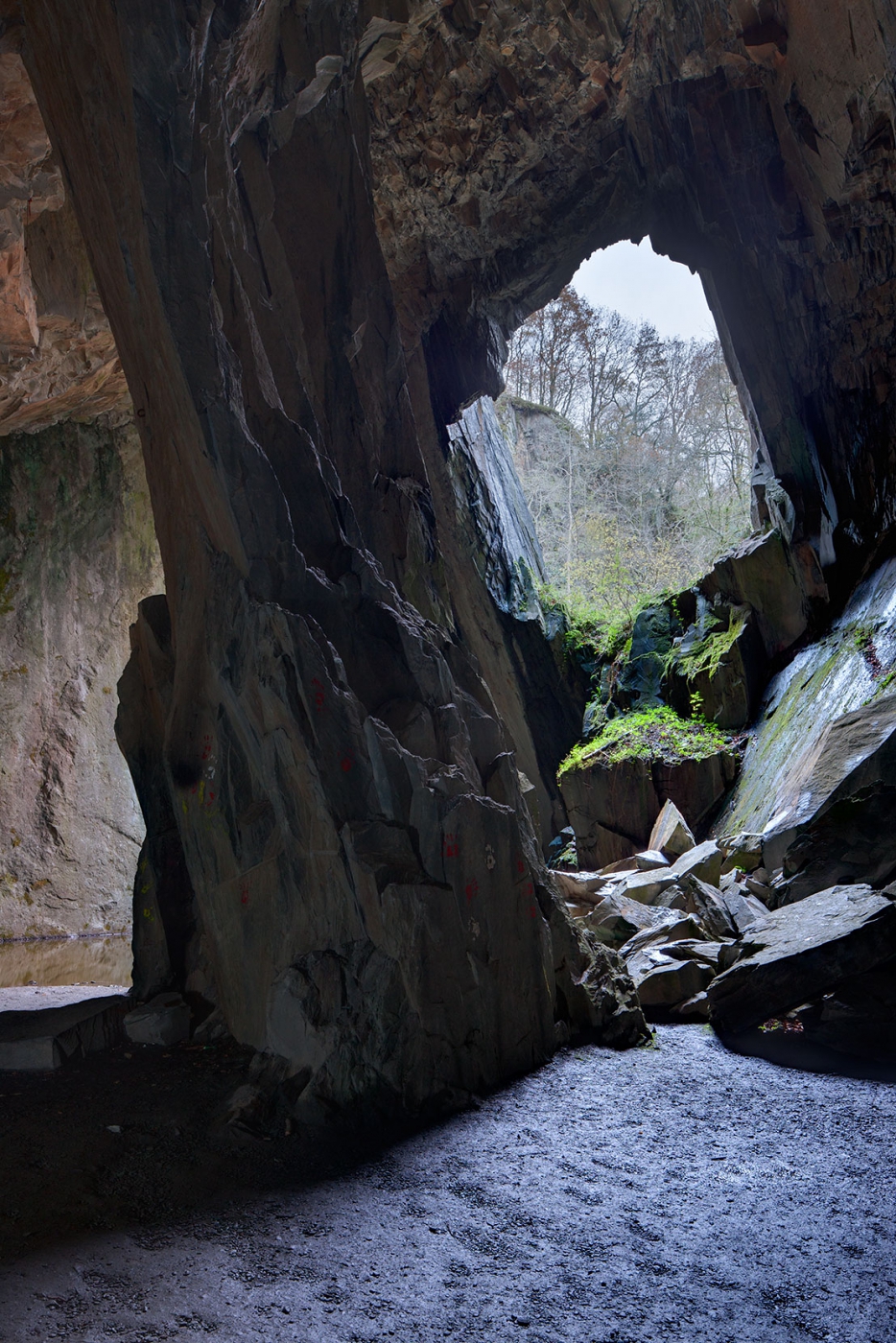 Coming in through the flooded entrance tunnel, something quite angelical begins to happen. For starters, there is a light at the end of the tunnel and as you move towards it the space opens out into a bubble of textured monochrome edging. Next you stand in awe of an unlikely feature, a gigantic slate blade that prevents the rounded ceiling from collapsing onto the memories of those long departed miners beneath. Without this structural support, the cave would be no more. The swimming pool is certainly not for swimming, but as you filthy your Gortex by crouching against the cave wall and gaze across, the rock falls opposite invert into truly fascinating reflections.

After the elation of singing phonetically in my best faux Gregorian dwindled, I set up the camera on the edge of the water, the tripod almost fully submerged. Great reflection shots rely on positioning the camera as low to the water as possible but with drips of water creating their own musical score, a longer exposure would be necessary.

Then came the sound of an approaching army, but not just the crunch of synchronised boots; this time it included giggles. The giggles faded to whispers and then to silence. Over the boulders, around the edge of the blade, I could see a school party, all ponchos and hard hats, a geography field trip perhaps. A cheeky grin started to form on my face and in a burst of uncaged adolescent I unleashed a foundation shaking ‘Mwoar-hoar-hoar’. As the sound reverberated for an impossible six seconds, I followed it up with a fair enough question (so I like to think) and bellowed in my best Brian Blessed – “WHO DARES TO ENTER MY CAVE?!” 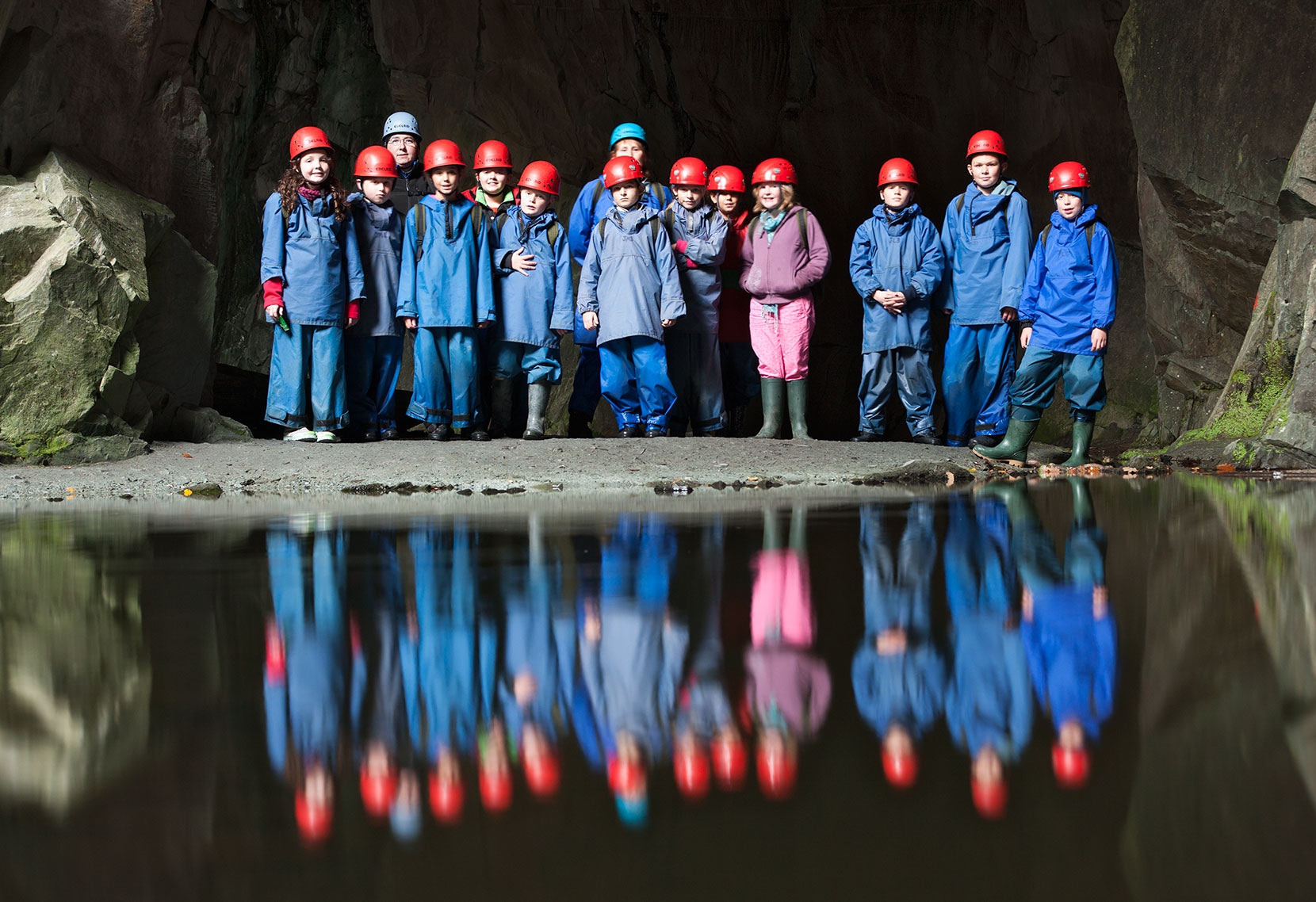 A brave little girl ventured into my line of sight and muttered to her friend, “It’s ok, it’s just some bloke over there being stupid.” How very mature. The group, lead by an activities guide, made there way to the waters edge opposite and you could say at that moment, angels sang as a truly magical picture unfolded in front of me.

‘Stay there! Nobody move….”, I ordered, sounded like I was initiating a corner shop robbery, “I am going to take your photograph. Everyone has to stay really still. Freeze and I mean freeze; you’ll need to stay still for six seconds. Three, two one, FREEZE…..”

Sometimes, when you seize spontaneity, when you hold it tentatively in your grasp, truly magical things can happen. As I gazed at the screen, my heart melted at the result. To my amazement I had captured a natural and almost perfect line up, a group of children obliging to the request of a comical stranger without question or order from their teachers. I stood up and made my way over round the shoreline, to show the stars of the show just what I had captured and they huddle around me as I crouched.

“Do the troll voice!” – a small blonde lad seemed more interested in my amateur dramatics than my professional photography. So I bellowed out an even deeper and louder ‘mwoar-hoar’ much to everyone’s yelps of delight.

Impressed with my result, I took down the lead teachers email address so I could send a hi-res as a memento of the day. I asked politely if they would oblige in a few more images to help me push this underwhelming week into profit and they gladly accepted.

After returning the following week, whilst gazing through the images I had made, I remembered my promise to send the pictures onwards. Yet despite looking through my Apple Notes, the address was lost. What an idiot. I felt especially bad, as to date I had completed all my location based promises, when accosting passers by to help add that human element to my work.

Yet, nine months later, when doing a spot of electronic spring-cleaning I found what I had overlooked. Email completed, wetransfer link sent, I crossed my fingers and waited. One week later to my delight, I received an email reply, explaining how my timing could not have been any more perfect. The picture was projected in assembly to the wonderful group of year six explorers, just days before they left primary school forever. A perfect end to their year and a heart warming conclusion to the story.

So finally, let’s wind forward to November 2015, another washout autumn and another return to Cathedral Quarry. The tunnel, the blade, the swimming pool… except this time there were goldfish! ‘How cruel’, I thought to myself and then it happened again… the footsteps, the giggles, the whispers … another geography field trip of Year Six children to unnerve. I took a deep breath; it was time to unleash another hearty ‘MWOAR HOAR HOAR!’