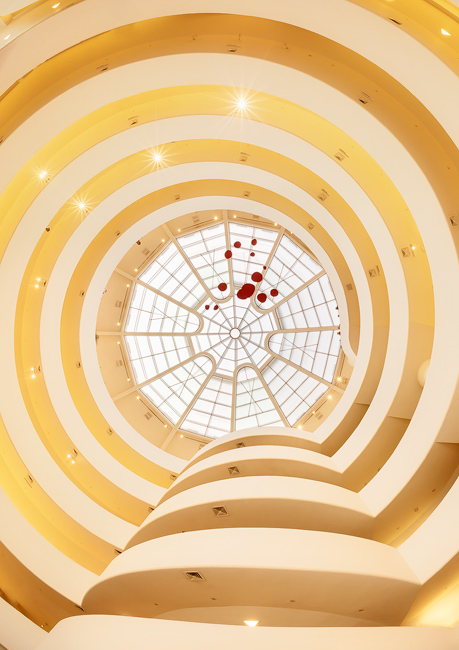 So how to get round the tripod ban? Well it was quite easy - set up and risk getting thrown out. I sat near a water fountain to work out the correct angle and postion of the camera, by lifting it up to my eye just like every other tourist. After working out that I would need to exposure blend two images to control the lighting through the windows, I took some handheld testshots at ISO1600. This is of course fairly horrible and totally useless, but it allowed me to get all the compositional and technical decisions made in advance.

SETTING UP - Don't make it too obvious. Keep the tripod low and hide it behind your body, the opposite side to the security. Attach camera and line up. Climb underneath, turn on Live View and position as previously decided. Now focus, check edges and bingo - blast two shots AEB at ISO100. That took around ten seconds in total. Check the histograms for each image to ensure the light range has been captured. Repeat and repeat.

Now get told to stop by security. Smile, shrug shoulders and explain you're  sorry. Then get all apologetic, that you didnt know and put the camera away. Security say are fine with me carrying on, just without the tripod. I pack up and leave, smiling. All nice and calm, everyones happy.

PROCESSING - Well this was nice and easy. I pushed the white balance in LR4 to take advantage of the warm lighting and make it glow like liquid honey. Assemble exposures in PTGui (yes it can be used for straight blending and the results are utterly superb) and then spend ages cloning out moving people, all heading up the spiral. I couldn't work out whether to leave the red mobile hanging in the centre of the frame, but its querky, so I left it for now.

All in all, a good raid!

Top of the Rock

Later on that night we headed to the Top of the Rock - a brilliant view point at the top of the Rockefeller Centre. At this point its best to cast any idea of anything new. This is pure composition collecting.... and why not. You dont travel all that way to visit this remarkable city without standing in awe at one of the most remakable cities from above. 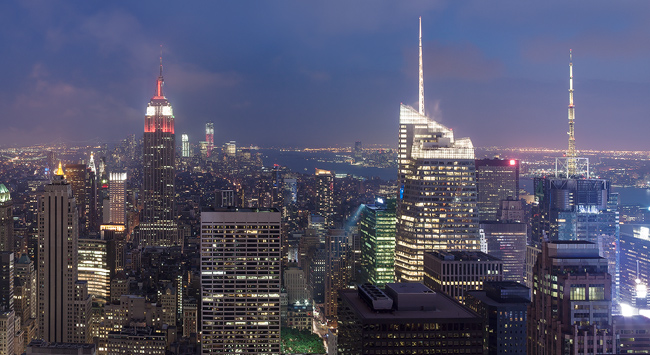 When you get to the top, its dog eat dog. Everyone is clambering for position by the railings and concrete pillars. Yes, you guessed it, no tripods allowed. So i reach into my bag and grap the Gorillapod I bought in Singapore, which I used to capture skyline shots of Marina Bay last Christmas.

There's no spirit level on the Gorillapod, so it's complicated to shoot panos. Everything has to levelled by eye. The camera is then continuously monitored at 10x Live View before exposure with a cable release, as the 1Ds3 + lens is too heavy. Strong wind causes significant vibration, but with good practice it's easy to take great images and comply with the rules.

Taking multiple shots of the same scene worked really well. I was then able to select the sharpest images for assembly in PTGui. Here's a full image from last night, a 14000x5600 image. I'll post it over on the Portfolio soon so it can been seen a little bigger.

Ok, off for the last dusk shoot, back to the Manhattan Bridge. I have shelved the idea of Times Square as it's just far too busy.