After arriving in the dark, it became rather apparent that this was going to be a trip of extremes. Ice was starting to form on the puddles in the road and gone was the burning heat of Mesquite Dunes. We relocated to the lesser known Eureka Dunes, a few hours north. There, in the moonlight, were the largest dunes I have ever seen, ominous as silhouettes, dwarfing Mesquite entirely.

The Eureka Dunes are around 700ft high and a good half a mile long. After nightfall, we pitched tents by head torch, the concept of another specatcular dawn shoot lifting spirits high. I had no idea that the night of freezing temperatures would leave me without any sleep at all... 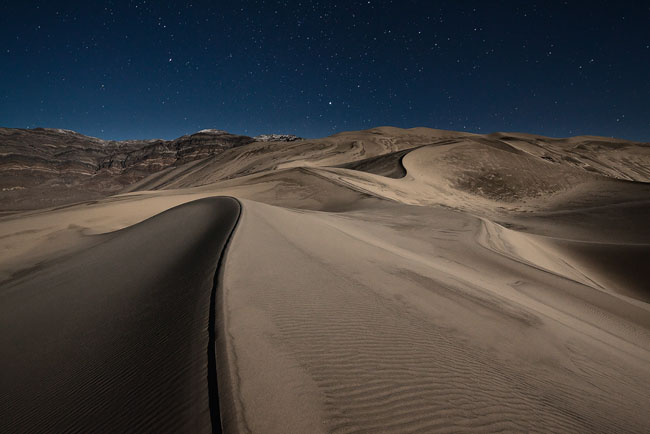 After a somewhat unsettled few hours of pacing and trying to keep warm, I finally gave up. I packed a light bag and went to climb the dunes solo in moonlight. There's no good thinking about it, just do it. As I walked closer, the became even more imposing and the more nervous I got. Although steep, I climbed the hard sand for ten minutes or so before looking back in in utter elation. The moonlight was sublime with thousands of stars to the east, the moon to the west and the tip of Orion rising from the far off mountain ridge.

The cold temperatures had frozen the sand solid, almost like concrete. It was almost possible to climb without footprints and I felt very precious. Looking back to camp, I smiled as in the distance I could see Mac had decided to follow me up, so I waited for him and we climbed the dunes together. Now I understand the meaning of the phrase 'deafening silence' and we felt it appropriate to whisper rather than disturb the night air. With such silence, even the smallest of sounds, like sliding fabric of my coat, would have me on false alert. 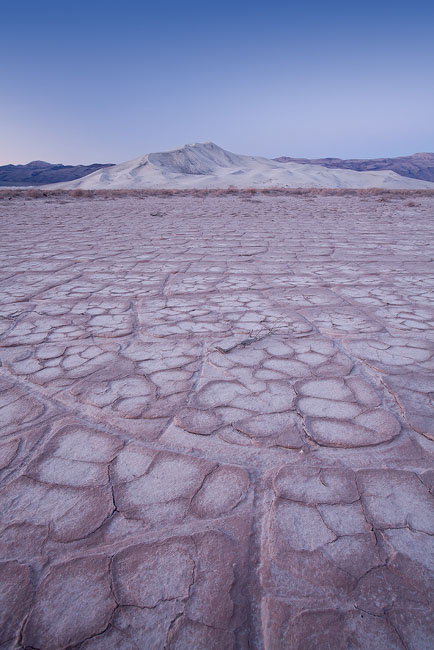 Dawn Shoot - After freezing in the car, we got up and shot this view across the 'pavement'

After a lousy night of shivering in the car, I was weary. Mac headed off to explore some dunes to the west and Bryan and I teamed up again, heading up Eureka once more. It was now much warmer again, the silence prevailing to a soft morning breeze. It felt possible to hear every one of the grains of sand that blew from the ridgetops as we climbed up the opposite sides. Higher and higher, the scenery just got more breathtaking. Mountains that seemed no more than an arms length away were over twenty miles or more, spanning out in every direction. The experience was just as remarkable as the moonlight walk, this time with different photographic opportunities. I was on constant lookout for sand patterns and found some truly remarkable examples like the one below....

At the top of the dunes, the view was worth every stride, but once again the clear skies were back. Bryan and I spent a good hour just sitting, looking and listening, before traversing the ridges in the image below. We were not going to get the colour that we were craving from the day before. Although less photographically rewarding, it didn't matter, as our feelings of contentment from this experience far outweighed any dissapointment. 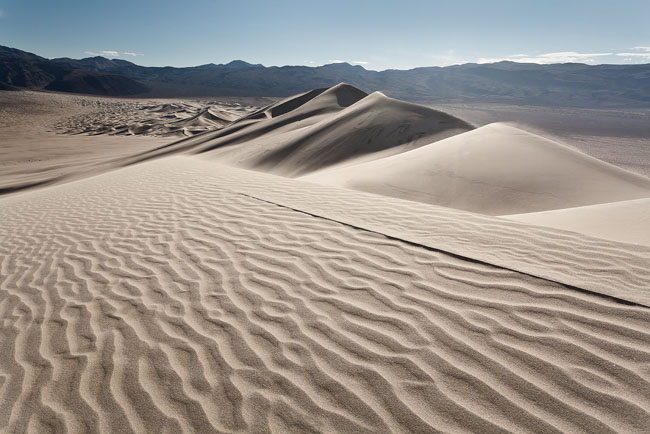 One of the best things about any trip is being with the right people. Mac and Bryan were just brilliant to travel with. We made decisions together, always considering each others photography, keeping the importance of the our personal goals at the forefront. Working together for nine days in testing conditions was never going to be straightforwards and it was at this point, at Eureka, I realised I could not be with two better companions. With Mac as our illustrious leader, advising and inspiring, our image hit rate got higher and higher.

I took all our travel shots on the excellent Sigma 15mm fisheye, as this captured the fun we had by giving the reportage images a twist. The first one is taken by placing the camera on the dashboard, just above the gearshift. I would thoroughly recommend this lens to all, not just for serious imagery.