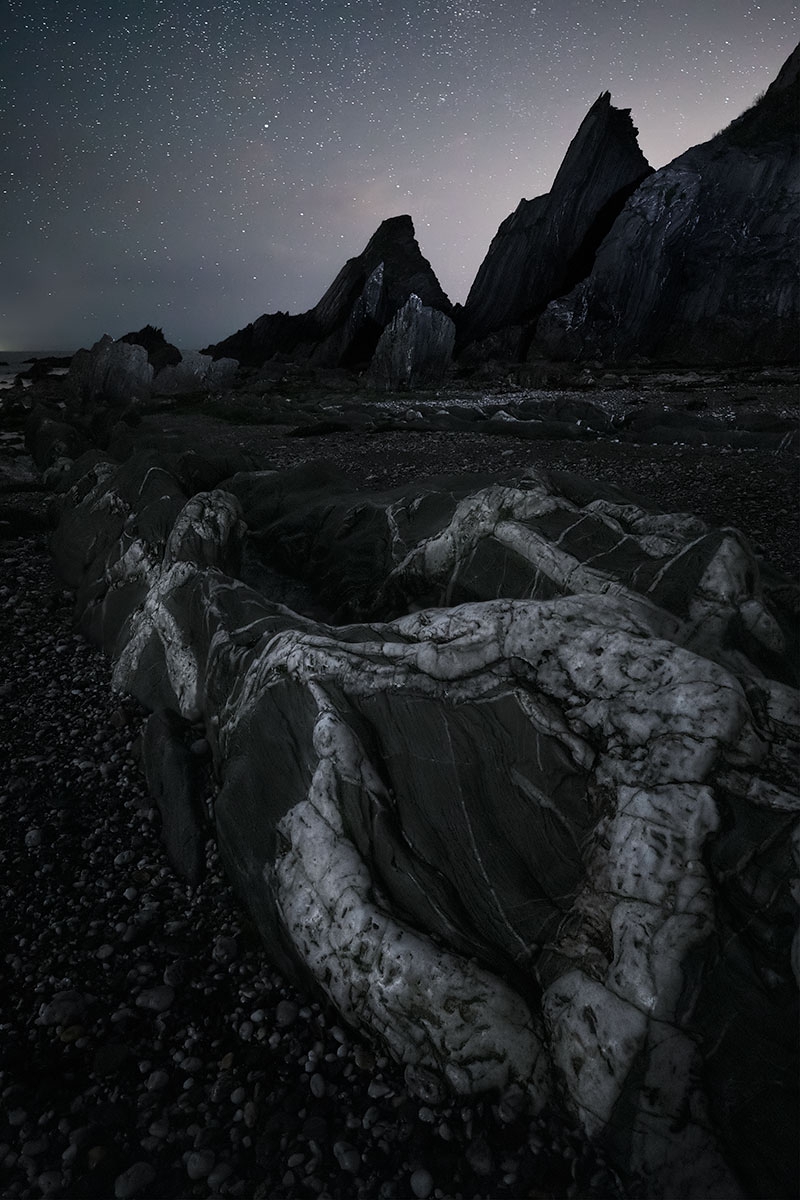 After a three days of work tutoring the RAF last week for Canon UK, I ended with an astro experience and a return to Westcombe Bay. It’s an otherworldly place indeed even in the day time, the focus being a mesmerising duet of triangular rocks, perhaps the result of an ancient interstellar land slip. It only works best for the sunset landscape photographer in the winter months, but with the Milky Way galactic core now in view above the horizon in the summer months, it’s an ideal and otherworldly astro shoot.

The problem with these nocturnal endeavours is always lighting, or the lack of it, that and the positioning of the Milky Way. The night skies requires a good blast of ISO to see any of the celestial detail. As for the landscape, that needs a dose of subtle moonlight, but the galactic core is always best under a new moon, which renders the landscape literally black, making unusual and striking images hard to achieve.

So you have two choices - option one is to jack the life out of your RAW files, plasticise the features in excessive, smeary noise reduction, downsize, post online, hide behind social media and then don’t tell anyone how terrible the hi-res looks. Option Two is to light the scene with your own light sources and try to match the brightnesses with transparent light painting.

I chose Option Three - light painting the foreground, background and focus stacking for a night photography image with a twist. So many night time images have way too much sky, lacking compositional dynamics, but it’s simply down to depth of field vs light gathering potential of a f2.8 wide angle. So here I go, headlong into a forty minute data-gathering headache, focus stacking and light painting the rocks, whilst decoding the puzzle along the way.

So let me bore you with further description. The image was shot on a Canon 5D4, using a borrowed 16-35mm f2.8 @ 20mm f2.8, 25secs at ISO3200 with a 3000k white balance. The first image, focused at infinity was for the night sky rendering the rock features virtually jet black, then I ran off to the right hand side and attempted multiple light painting attempts of the background rocks and beach with a medium strength hand torch, to get a nice even balance.

With that complete, I returned to the camera and lit the foreground with a head torch to attempt to start the focus stack. With infinity focus at the start of the sequence, I needed to know where the focus stack would end, so I switched on live view and focused the camera to the foreground, noting the position on the lens scale.

The foreground needed to be side lit for maximum visual effect, but a head torch in such close proximity at ISO3200 completely cooks the exposure. Stand further back? Well that doesn’t work either as the shadows it creates are far too hard, leaving the shot looking ‘caught in the headlights’. So after trial and error I worked out the best way was to stand stage left approximately ten feet away, put the head torch in the pocket of my light grey jacket and turn left and back to centre, to diffuse the light and spread the subtle glow towards the water.

It took fifteen exposures to get from infinity to the last grain of sand at the foot of the tripod, turning the focusing ring a few millimetres on the lens scale, to ensure image overlap. I had to mark the place where I stood with a rock to ensure I returned to the same place or the lighting would appear inconsistent. I spent a lot of time filling my soul up with wonder in between those exposures, gazing upwards and contemplating the infinite.

Back at the ranch, the images were all loaded into Lightroom and subtle lifts in exposure, blacks whites, highlights before converting to TIFF files. The images were then loaded into Helicon Focus, a wonderful focus stacking program used by most for macro imagery. The program allows you to correct Auto Blend style errors with ease, unlike Photoshop which is a total nightmare if the blend is full of errors.  Once assembled and checked, picture was further enhanced using focused luminosity masks and a number of techniques to dodge and burn the foreground. Total time start to finish, about two hours if you include the capture time. I had to return to the computer again and again, as I kept losing the essence of night with overeager processing. 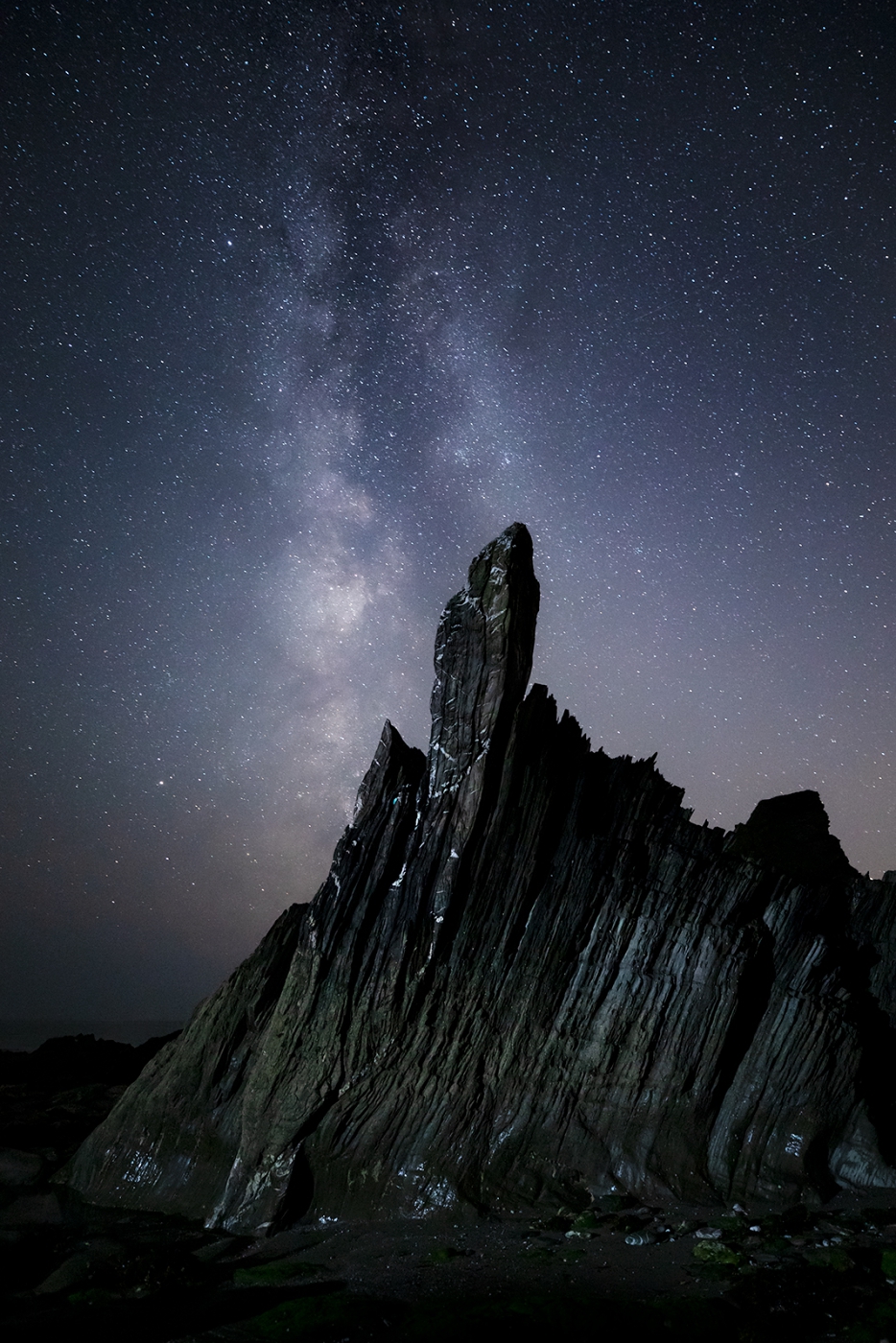 These days were bathing in celestial glow from over a now common bullshit photography phenomena called ‘night shadows’. This is a final word on the celestially ubiquitous summer Milky Way - don’t be duped by UK photographers who montage, reposition and literally fry a separate Milky Way into the back of their images in pursuit of an imaginary currency called 'likes and shares'. That Milky Way is often not even from the same shoot. Go out on a clear summer night and soak it all up - you wont even start to see it until after 10:30pm. Now look at its direction; it’s pointing upwards when it first appears clearly - 11 o’clock at around 11pm. Throughout the night it continues to rotate to the right until at 1:30am it’s almost vertical. By 3am it is almost pointed at 1 o’clock (and looks rather odd) and then by 4am it is almost disappearing… Never at any point is it lying at a compositionally comfortable 45º. Look for tell tale montaging signs of bright stars on the horizon line (which you never get due to coastal humidity) or strange luminosity differences between water and sky. If you question it for a second, it's a cut and shut.

If you want a truly remarkable night sky, with a massive galactic core, I’m sorry, you need to change countries, continents and finally hemispheres. The UK is sadly not even a four out of ten. It never gets dark enough but it's still a great experience.