Over the last few years, it is fair to say we have all seen the popularity of worldwide landscape locations grow to literally epidemic levels. As our social media fueled creativity struggles for identity among the billions of daily posts, we plan our adventures in a new and technological way. I am not talking about using Booking.com, I am talking about the very reason to visit them - impact.  Travel now has a new companion – social media – and literally all of us are affected whether we like it or not. For many it’s an 'easier than email' approach to staying in touch, but for those of us more successful on those platforms, it is becoming the principal motive for our travels. 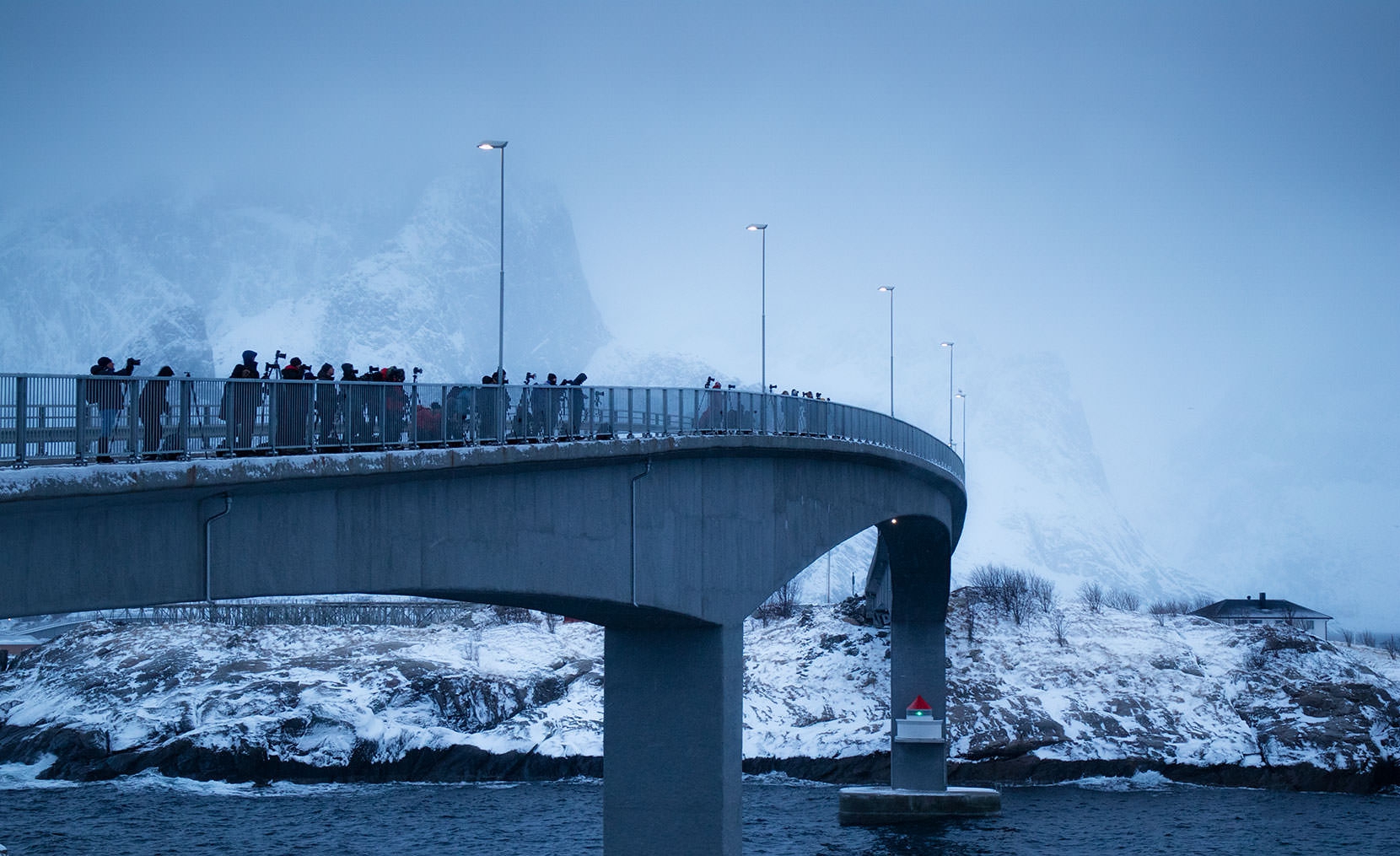 Or is it? Are we really that vain? Is it simply because the places are so damn beautiful that we feel compelled to share them? Is our education fundamental with phones and laptops playing a secondary role in recording those feelings, or is the tail wagging the dog? Are we simply collecting compositions to share, in an attempt to gain satisfactory social return for our financial investment, or are we just sending each other digital postcards without the stamps? The big question is - are we defining ourselves, building a social identity, a business identity, or just having a jolly good time and recording it in the greatest of detail? Where do you sit in all of this? You can see that the purpose for all this techno-travel is a tricky shape to objectify but it is one I have now grown rather fascinated with during my trips to the north. 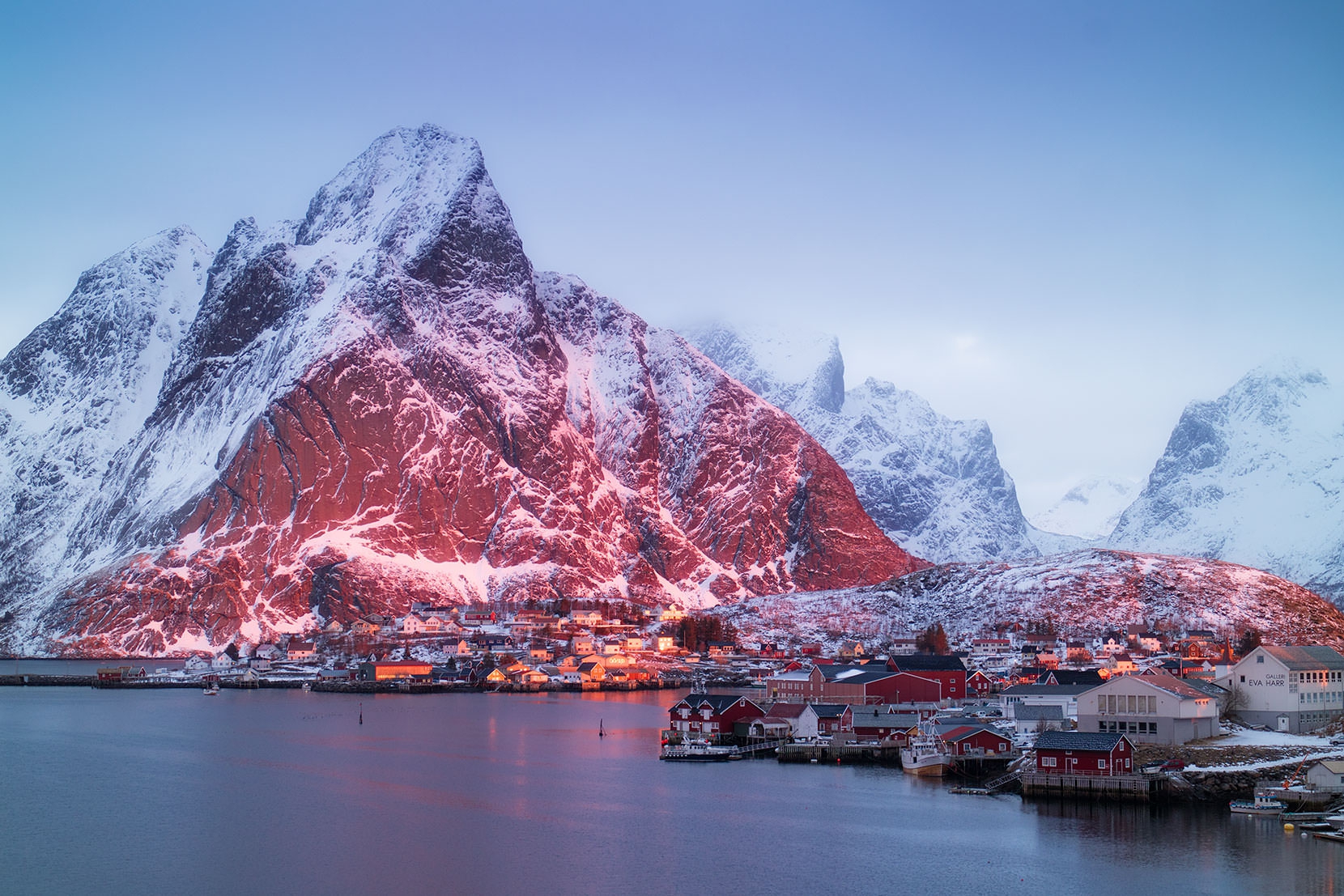 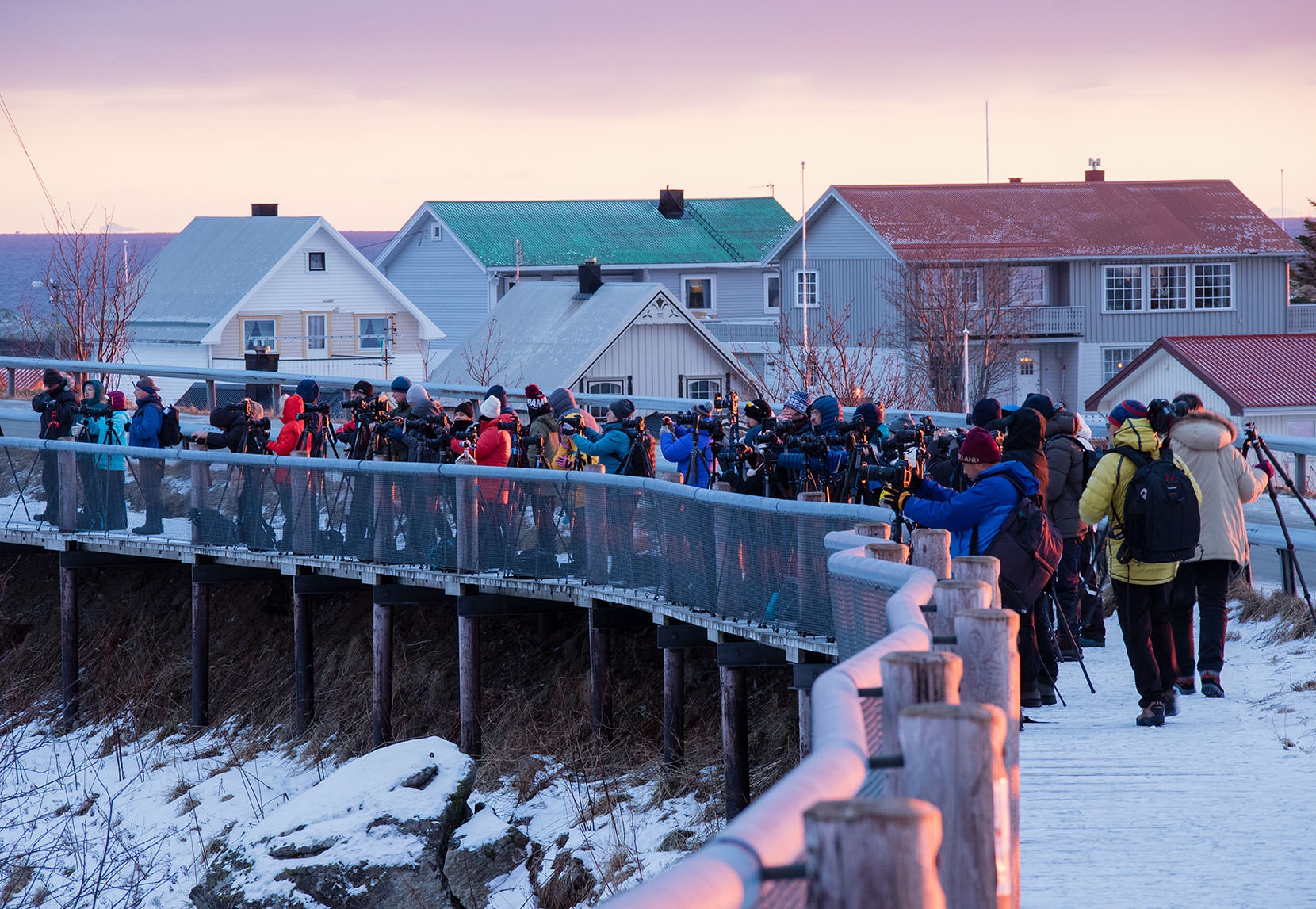 When I first began touring Norway back in 2009, most accommodation was closed during the winter months. We would arrive in a blizzard, looking for keys left in a box on the wall of a boarded up reception. Rooms were cold, pipes were often frozen and the coffee shops we used for a warm up were open for just a few hours a day. Now, the hotels are like military barracks, filled with battalions of ‘F-stop Warriors’, clad in luminous gortex, globally positioned into their own augmented reality of weather updates, webcams and smart phone apps. Many nationalities bunk here over the winter months whilst on sortie. Cards are backed up, kit is cleaned and online weather studied, as they sit poised for the ping of aurora alerts that will send them scurrying out into the night.

Last year at Flakstad beach, seven workshop minibuses docked at once for an evening shoot. They released a record fifty-six people onto the snowy beach for sunset. Foreground flanking, pattern craving Europeans armed with wide angle lenses, crammed impossibly onto thirty metres of shore. As the manoeuvres reached its crescendo, support arrived from the air. Four rather wobbly DJI Phantoms, buzzed, whined and blinked through the windy refrigerated skies like a cacophony of airborne garden strimmers. I felt an immense loss that day, but there I was with my own workshop contributing to the despair that everyone else was surely feeling. I cast my thoughts back to those quieter years, those winters when this world-class location was ours alone, when pulling into a starry Uttalkleiv beach was met with excitement and fuzzy glow of horizon level green, not forty people screaming back at you to ‘turn your fucking lights off’. 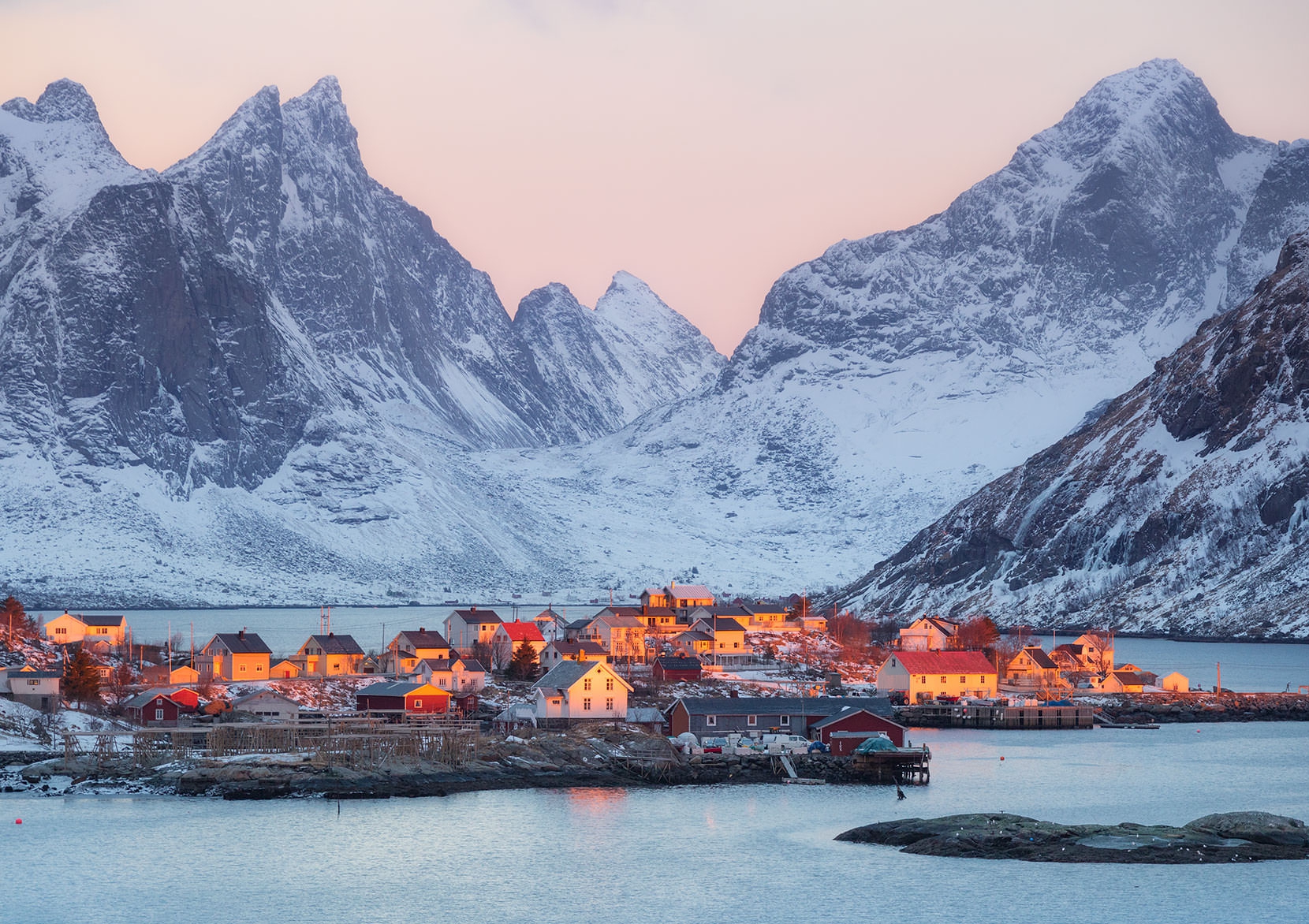 On this trip, whilst coming into land, I tried to think positive. At this point in the article, from your own perspective, you could argue this congestion is all in my head. Perhaps I am the sensitive one and everyone else is perfectly happy, accepting the inevitable use of excessive amounts of content-aware fill. So let’s have a look at why things seem somewhat concentrated –

- Most people come to Lofoten as photo friends or as workshop participants, in small groups, in estate cars or larger workshops in minibuses.
- They all book their adventures around the moon phases, to get the best aurora images, preferring dark skies over moonlight, which concentrates the groups into ‘peak weeks’. Either side of these, the snowy landscape becomes bleached by as little as a 40% moon, so bookings are lower in periods of bright moonlight.
- Most photographers are never comfortable with walking very far, which supports the humorous theory that ‘no good images are found more than 500m from the car park’.
- Easy car park access to photogenic beaches in Lofoten is only really found on three or four beaches, which focuses photographers into key spots at peak times.
- The same concentration occurs on north facing ‘aurora beaches’, where compositions are easy and access to a car or van in -10c is an absolute necessity. 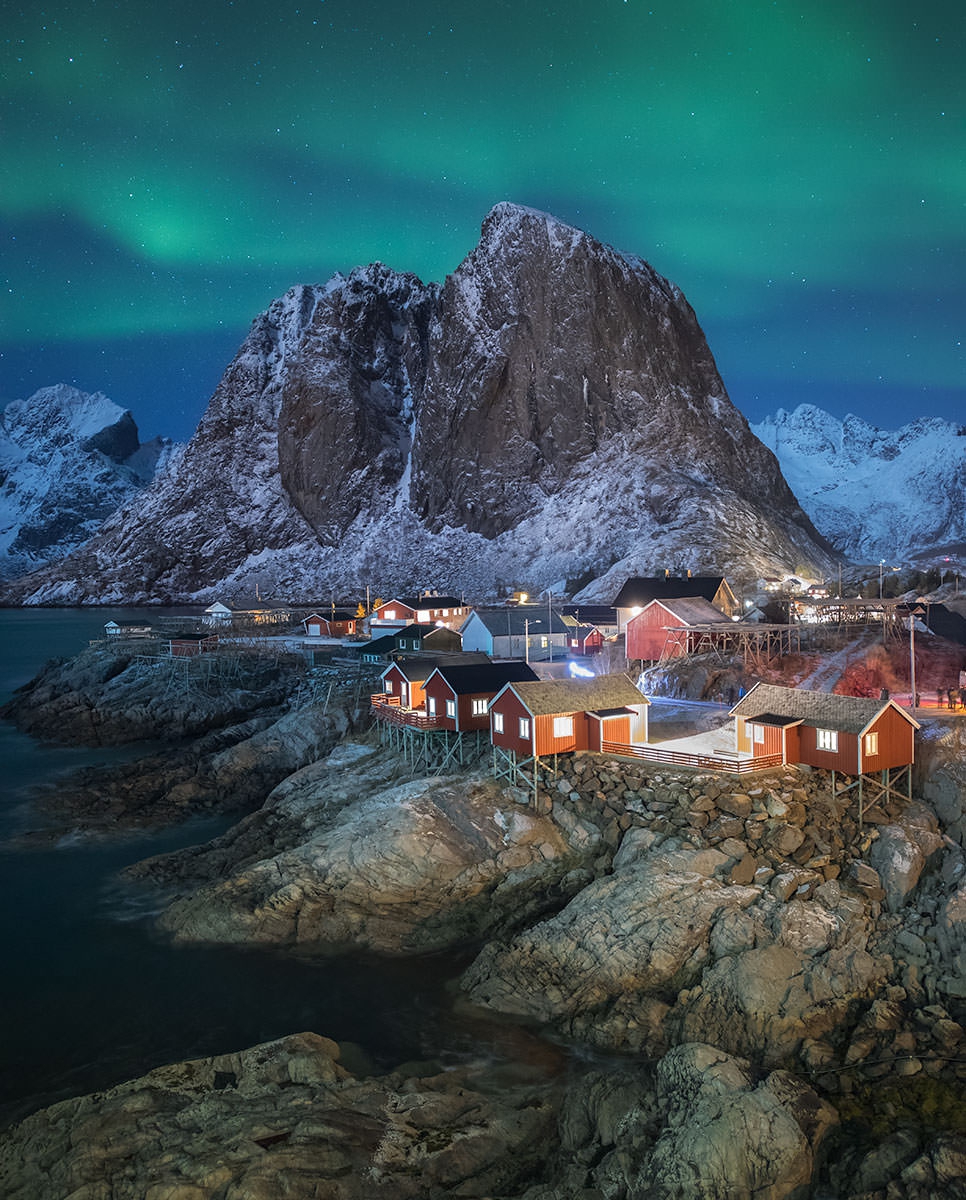 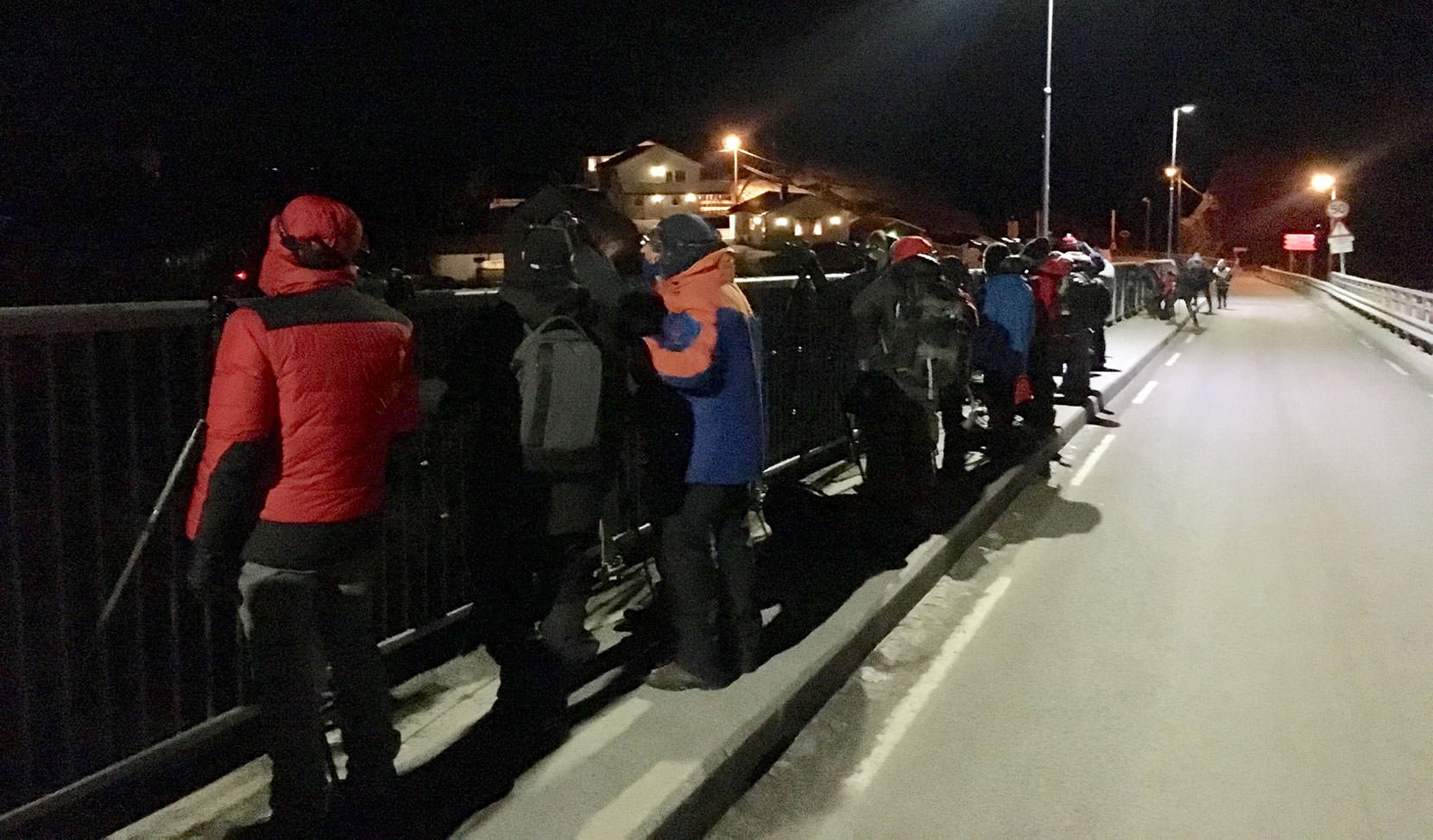 But what of the utter madness in Reine and Hamnoy? Well it's slightly different there. The demographic is now made up of minibus workshops, car groups and now those who actually took the bus. Yes, there are many people staying in cabins who have no transport at all and it is these flimsy-tripoders who swell the numbers to eye rolling levels shall we say. So, of an average sunrise I calculated we have four minibuses (7 people x 4 buses =28), four car groups (4 x 4=16) and as many as ten photographers either single or boyfriend / girlfriend bus passers, who made it here without a car.

At every sunrise / sunset / aurora shoot I began to construct a fag-packet census. At the fall-out-the-car-door clichés, I counted approximately 30-50 people, which I feel substantiates my population approximation. As for the country demographics, there were many nationalities, the dominant being English and German, with French, Italian’s, Chinese, Thai and now Russian photographers rounding the data up in my somewhat unscientific statistics.

This year, my wonderful group was incredibly accepting of the numbers. They stayed optimistic and focused on having the best time over all, sharing the location rather than resisting the agoraphobic experience I was initially having. There was no claustrophobia standing shoulder to shoulder at Reine, no aggravation above the icy sea over Hamnoy Bridge, just a congregation coming together to enjoy a technical communion with their friends, to share and hold a classic composition forever in their hearts. Now that can’t be a bad thing, can it?

I started high-fiving smiling strangers when we met again. I saw a young Thai lad and his girlfriend on multiple occasions and they would always greet me with a warm welcome, day or night. He spoke good English and I began to wonder what motivated him to come here.
“Is it for the aurora?” I asked.
‘No its for the winter. There are only two seasons in Thailand, hot and bloody hot” - what a classic answer.

I met a smiley German photographer in Hamnøy who I saw many times over the week. We always said hello to each other. In fact the more crowded it was, the more I spoke to my direct neighbours. I opened up instead of adopting an eyes-forward urban mentality and it actually felt good to be part of a community sharing the same idea, just from different levels.

From first timers to twenty-something lovers, from iPhone to DSLR, from close friends to new friends, from travel writers, bloggers and vloggers, to the semi pros, the seasoned pros and the finally the pilots – there’s room for us all.

The Future Is Bright...

So what of the future? Initially it can’t get much busier as there isn’t the accommodation to support it. There is plenty of space to build larger super hotels, a move we are seeing implemented in Iceland, but I can’t actually imagine this is something that will happen in the Norwegian landscape, not yet any way. Then there are limited minibuses and cars to hire, which means hiring from distant cities out of comfortable reach for anyone but the most dedicated tourist.

The photo tourist economy is booming, the winter months are busier than ever. Camera technology and its accessibility has opened the door to adventure supported by cheaper airfares. Then there are the extended winter opening hours at the Reine Bringen coffee shop, from 11-1pm to 10-5pm (you can thank me for that one). For now you can bet your last chocolate brownie that the interest in Lofoten as a world class destination will remain strong - let’s just hope the wooden walkways and bridges can continue to support us and all our photographic endeavours.

Now stop flashing your head torch and get out of my shot.