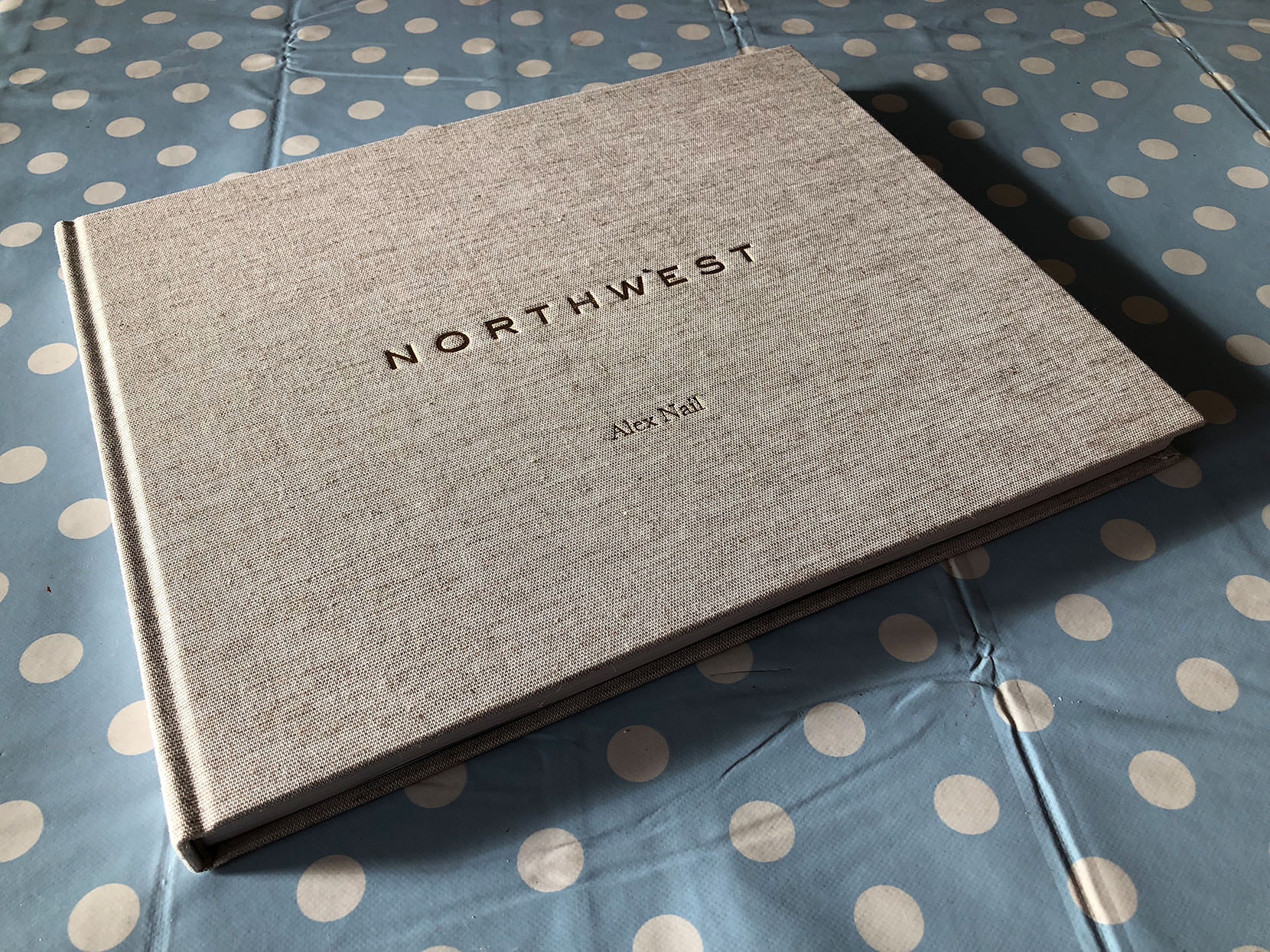 I was not originally sure if Alex had made the right decision asking me to review his new book. I am sure that my opening line has made him nervous, but considering that the picture I just uploaded onto my website was the study of an electricity pylon in Cape Town, I feel my own classic landscape credentials have somewhat diminished to ‘opportunist status’ in my hunt for the esoteric. The reason I took on the task is not because I am a huge fan of mountain photography, but because I am a huge fan of risk and photographic endeavour. That is what he has presented in his new book North West.

Alex and I go way back, in an internet sense. I have been aware of his endeavours for years, since I too started my own photography. Despite all those moorland sunsets, we have never crossed paths on any granite outcrops (I am east and he was west), but what we do share is the importance of Dartmoor, close to the centre of where we began our adventures. He was certainly a spotlight on the website Deviant Art all those years ago, a posh kid bursting with smart-ass explosive keyboard attitude. Yet despite some tussles, I don’t think anyone knew the comment-box flick-knife he once carried was actually a sword of truth. In memorable battles, he’s taken your side when you didn’t have the guts; over the years I’ve seen him expose LPotY judging blunders single-handed. Hell, I have even seen him try to take on the entire USA in ridiculous 500px post-processing ethical warfare and his recent Babnik sparring was utterly commendable. So why does he do this? To maintain the greater good that’s why - to stop landscape photography from sinking into the shitpit of Photoshop deception it hovers just above in 2018. Alex doesn’t like to walk an easy path, but then anyone with something to say rarely does.

Before I began this book review, I felt it necessary to paint the portrait of the man who wrote and assembled North West - a man who nervously discussed the project figures over a latte in a posh Bath coffee shop and said, “this is either the start of a major career, or the end of it.” So before you turn the first page, remember that to him this book is a fucking big risk, just like the adventures that he undertook to get the content; driving up the M6 in silence, hauling the ridiculous 25kg backpack load onto his shoulders in the rain, setting off anyway, desperate to witness the spectacular, despite the predicted meteorological forecast. The teeth-chattering frozen nights, the howling winds, the sleep deprivation – remember these ordeals are present in many a page. So before you begin, be prepared for the drop – this book is going to make your own potential book, ‘Pretty Views of Scotland Clichés from A-road Laybys’ seem utterly derivative and pathetic in comparison, because this guy means it from the back of his broken hand. 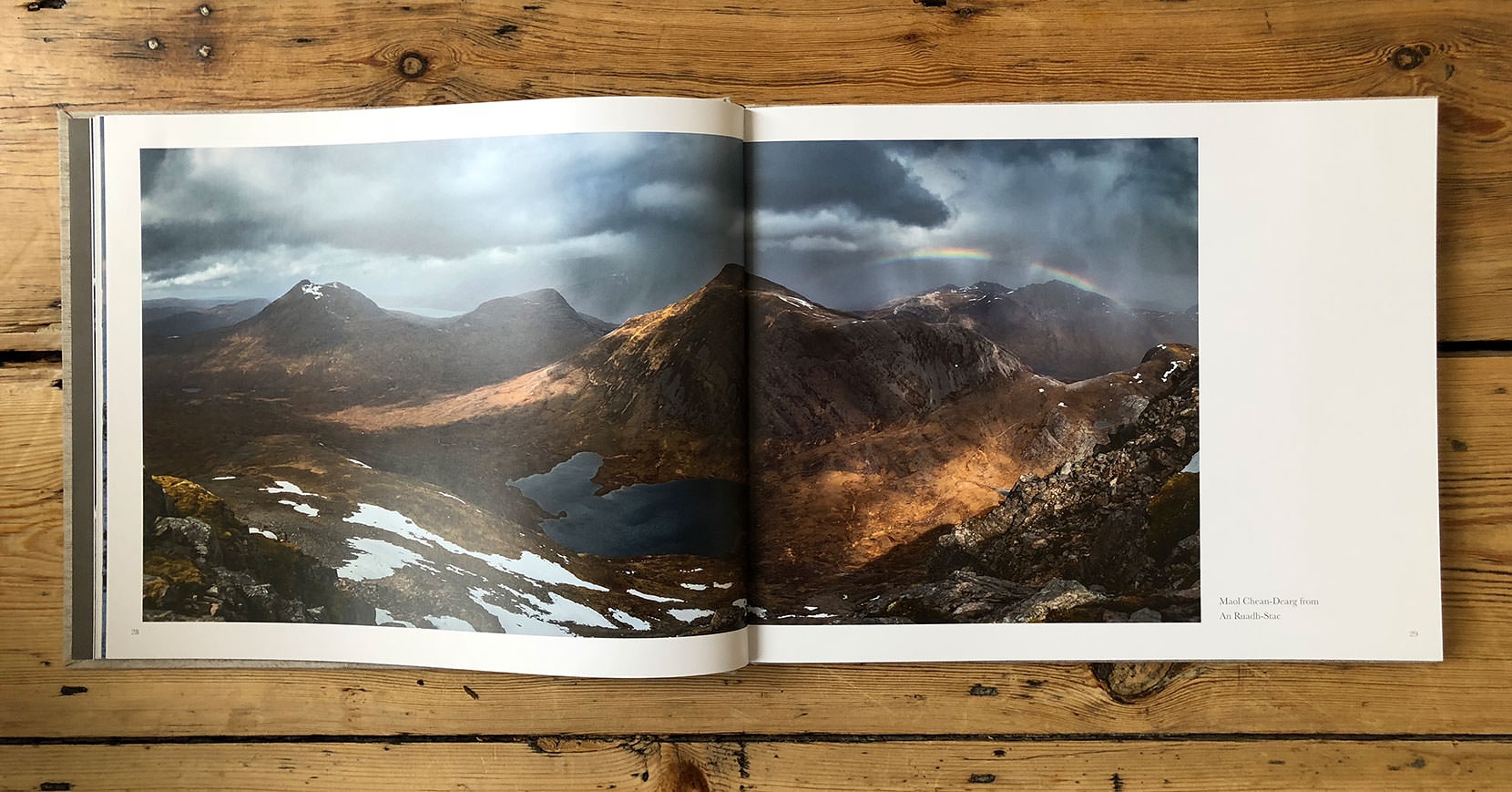 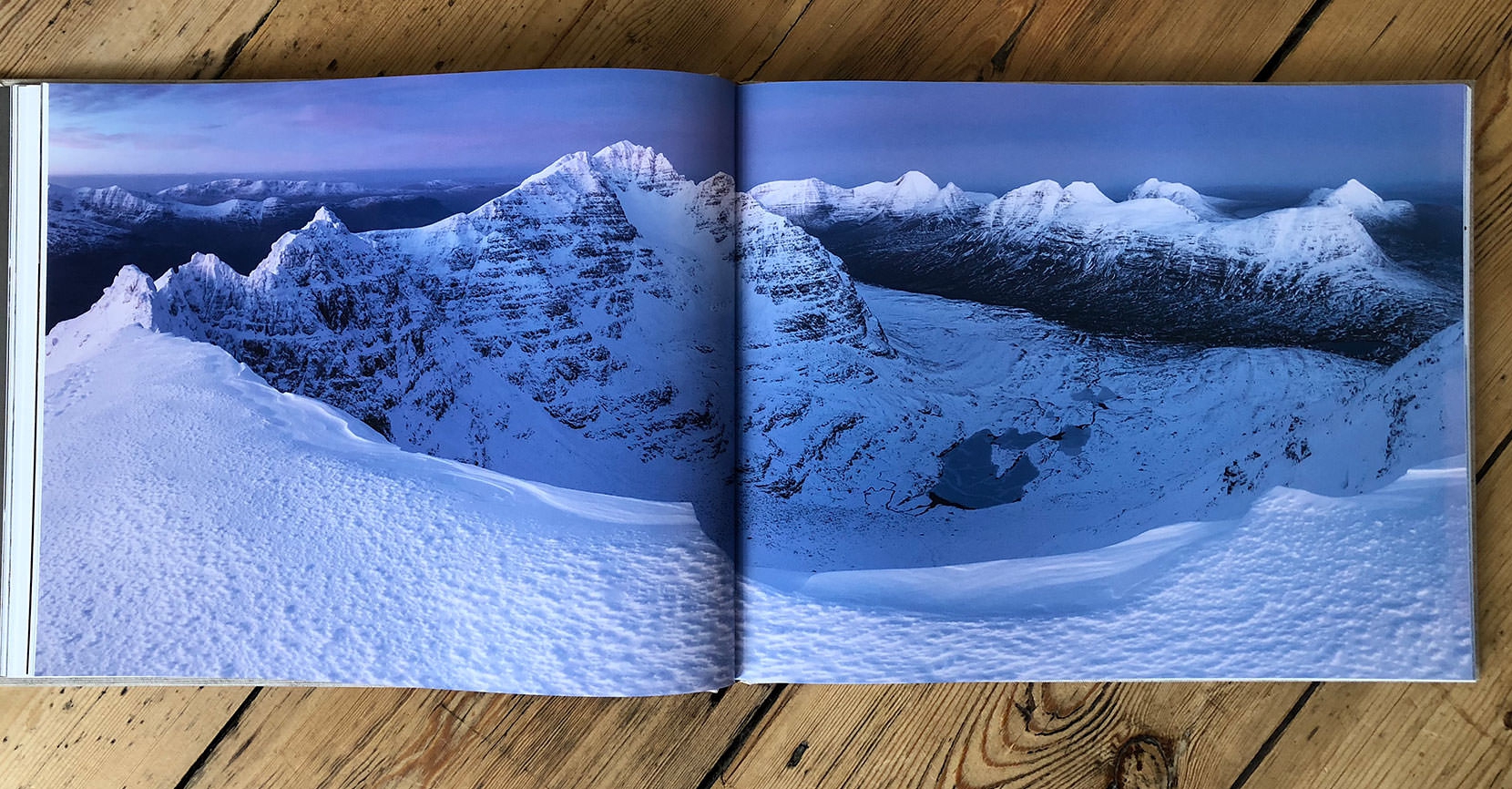 When it arrived, I carefully unfolded the recycled paper wrap and stuck Alex’s ‘thank-you’ card on my fridge. Instead of the irritating dust slip, there is a wonderful textured cover with an embossed gold title. The forward is by Chris Townsend, Hillwalking Ambassador for the British Mountaineering Council, whose Twitter avatar looks a lot like Tim Parkin in winter plumage – no legacy addressing landscape has-been in sight thankfully, and therefore no eye rolling from me. Before you even get there, the opening images (a classic from Alex’s portfolio and an expansive moonlit panorama) give you a taste of the books potential diversity. The introduction text is a humble take on his experiences, the thought processes he underwent and his position on image presentation in a modern Internet obsessed world.

The Coulin Hills is a strong opening indeed, with a dip into the elusive snow scenes he struggled so hard to capture. The sumptuous panorama on P14 is trounced by the remarkable P18 ‘Loch and Eoin and Maol Chean Dearg from Beinn Na- h-Eaglaise’, a wonderful last light image of the hostile environment in all its beauty. The Coulin Adventures section breaks my slow-motion page turning with a ‘diaries’ style look behind the scenes. Tales of battered tents, delays and frustration are revealed and he then shares an experience with Harsharn (Alex admirably acknowledges all his climbing and photography friends) and the importance of bothies to all mountain men. This reveals numerous key traits; that this is not a deceptive solo pursuit, that portrayal of this environment in all its beauty is at the book’s centre and this is not cash-in showmanship. 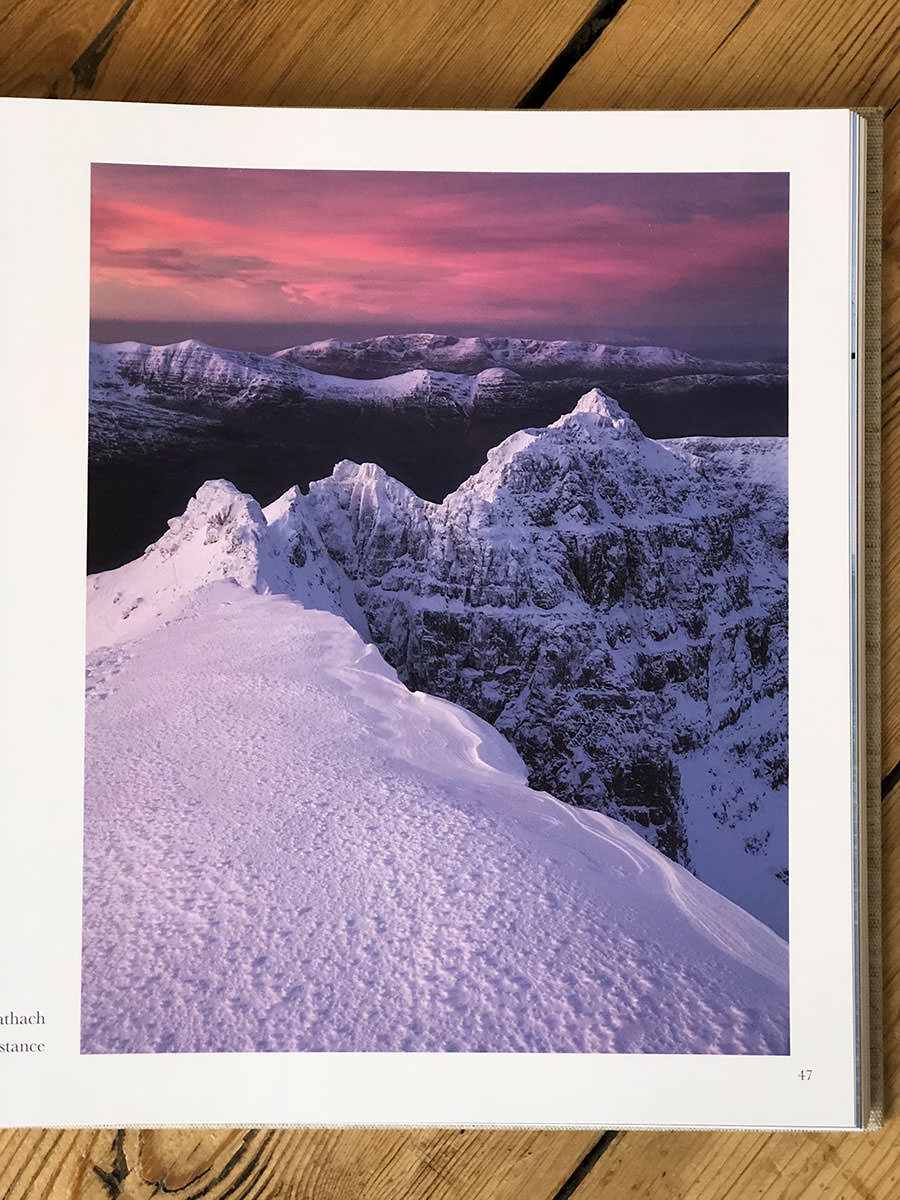 As the Coulins chapter continues, it also becomes very apparent that this is no showcase - the Scottish mountains appear to be channelling through Alex. These images are not about him, he appears transparent in the capture process, the polar opposite of self-congratulatory attention seeking work we find awash from insufferable landscape limelighters, you know, the people who crave recognition first and foremost, with their work secondary to their ambitions to be celebrities. This book is a study, a documentary as much as it is an enlightening obsession. Light is craved, chased and well earned; colour and tone is preserved making accuracy paramount to the delivery – with this book I become transported to the mountains, yet here I am sat on my sofa. Now that’s powerful.

The Torridon section opens with one of the book’s most divine panoramas – P44-45 ‘Mullach an Rathain and Coire Na Caime’ – a circular low light masterpiece of fresh snow and a healthy fear of heights combined, mountains swirling like turbulence towards the horizon. P47’s Benn Bhan is equally as powerful, with strong diagonals leading to the subtle peak – then you ponder the path along the impossible ridge and the fearful drop that awaits the unprepared. Yet up it climbs - the cloud inversion that sets P54’s ‘The Horns of Alligin’ apart, seems initially shot from the air until you spot the ground beneath your feet. The direction of evening light, the shadow interplay – it’s all pre-planned, it’s been planned for years – Google Earth, TPE, PhotoPills - don’t for a second think otherwise.

Heading to ‘The Great Wilderness’ section, the opener is magical, as is the next. ‘A Lesson on An Teallach’ highlights just how things can take a turn for the worse, as you reach for the gold. Guy Richardson has been Alex’s mountain companion on many an adventure and I am certain the pair of them were glad they were not alone that treacherous day despite the delirium and relief. As the accompanying text highlights, P89 is a remarkable sidelit composition they fought hard for and it’s well deserved.

As the pages continue, the mountains continue – I start to feel there’s a point where the subject matter begins to plateau, but then I am almost 100 pages into a book on mountains (note to self). ‘The Loch Maree Islands and Rewilding’ changes the pace again and thankfully saves the book from bottoming out. Reflected lakes and petrified look-a-like tree stumps glide the book towards Assynt, where the content descends gently rather than building to a crescendo. The mountains seem less impressive, the lines seem less cohesive; I’m feeling this section is slightly thin on the ground, or perhaps I’m tiring of the subject? The image on P128 ‘ Beinn Tarsuinn…’ with fog pouring into a gully, P130 ‘ Birch trees, Loch Awe’ and P136, ‘Suilven from the west’ are spectacular Scottish light and conditions. Perhaps I’m not expected to be absorbed it all in just one sitting?

I have spent a week digesting North West, dipping in and out to give it the review it deserves and overall it’s been an enjoyable week. I’ve watched judgemental friends flick through in five minutes with Instagram eyes, perhaps with envy, without appreciating the magnitude and scale of what this book portrays represents, or what it means to Alex personally. The first few sittings, I found myself riding a continuous theme, initially captivated but experiencing a building, nagging doubt – how much am I going to be able to endure before I just get bored?

Yet the longer I spent with it, the more I began to fully understand the scale of what I was seeing. It’s a cross over of mountain landscape photography, mountain walking and climbing adventure. It is an honest encounter of a relentless and challenging pursuit, more than it is a pictorial landscape book and he deserves credit for bridging this with an overlap. No doubt he will get self righteous, saturation-addicted contemporaries accusing him of sterility, repetition and a lack of subject diversity, but most of them are off montaging the truth in exchange for social currency, so who cares about them.  This is what he saw, this is mostly what he wanted to deliver and this is what I believe we are seeing in this Alex’s impressive first book. It’s not delivered with take-it-or-leave-it nonchalance, it’s an honest encounter – you decide. I believe the landscape world needs more of these releases to stop us drowning in the recent swathe of self gratifying art-school ‘nothing is something’ publications, from the so-called self-appointed art photography elite, who spend most their time protecting their egos wrapped in the subject’s ambiguity. They wont say, but they all started with classic landscape… and then realised how bloody difficult it was. 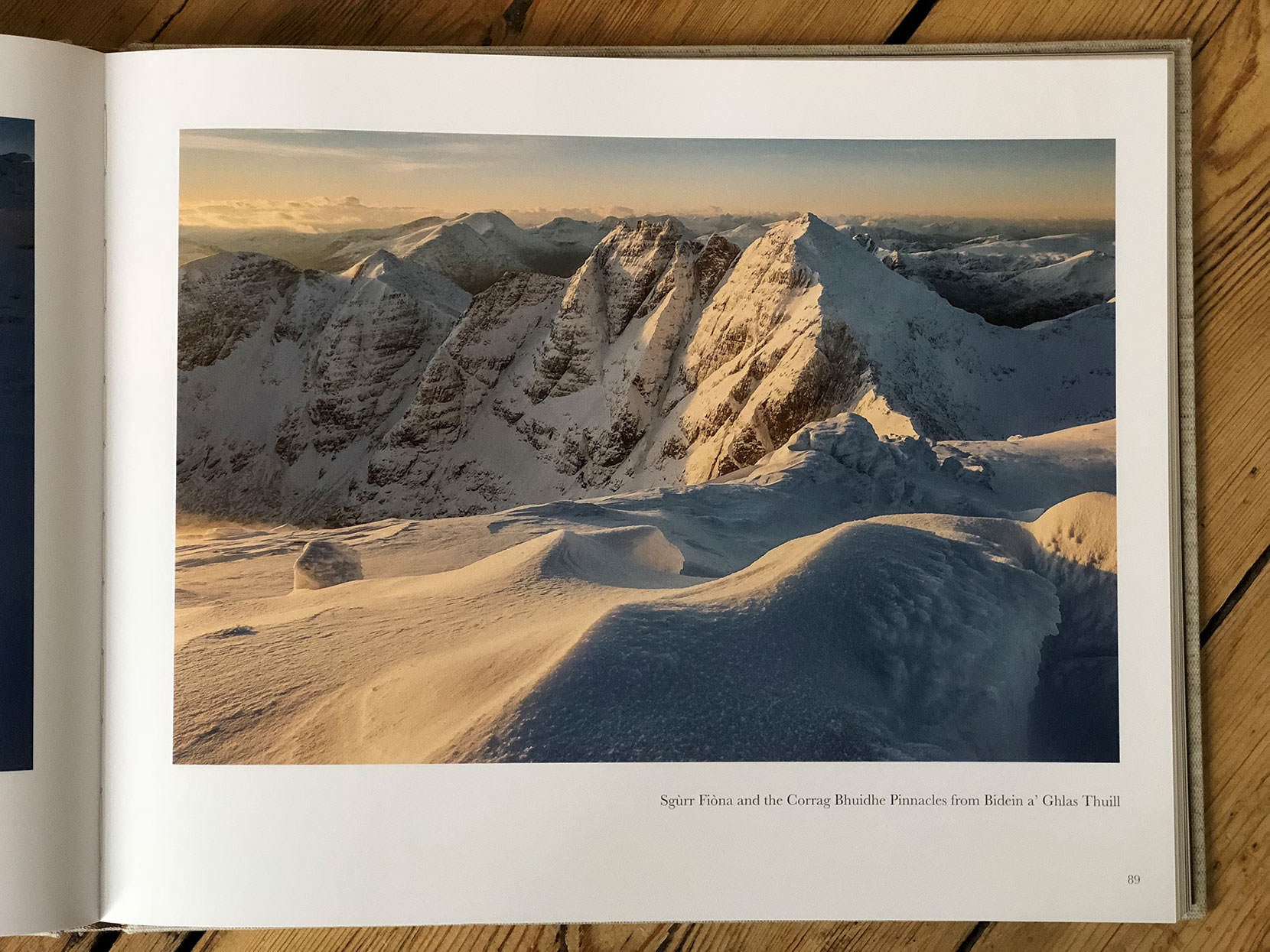 His compositions have matured, the mountains are speaking throughout and we can romance that he was simply there to let the moments pass through the camera. I believe his strongest shots are across double pages, which I wish we should all see printed twenty foot long – perhaps he would consider making a run of gigaprints, I certainly have the wallspace. There is no hint of ‘bananarama’, which often taints rotating panoramas of this nature, even though the scenes are often beyond ninety degrees. All the processing and blending work is seamless as expected from this technical obsessive, but I feel he is could loosen up a little and explore other ideas alongside the vista driven approach and pick out long-range abstracts or seriously explore the night? Perhaps he did and they didn’t make the cut or the weather never allowed it? He tentatively flirts with foregrounds, but I can pick up on a sense of purposefully ‘backing off’, avoiding the amateur look that this public pleasing approach demonstrates.

With 1100 books to sell, he has another mountain to climb, perhaps the hardest ascent of all. If North West survives beyond the friends, family, workshop clients, initial fan base and loyal pre-orders, if he can get touring with merchandise (which I fear is now too late) then this may become the success story I believe he truly deserves with this valiant first release. Let’s hope he won’t be building a bothy with the leftovers. 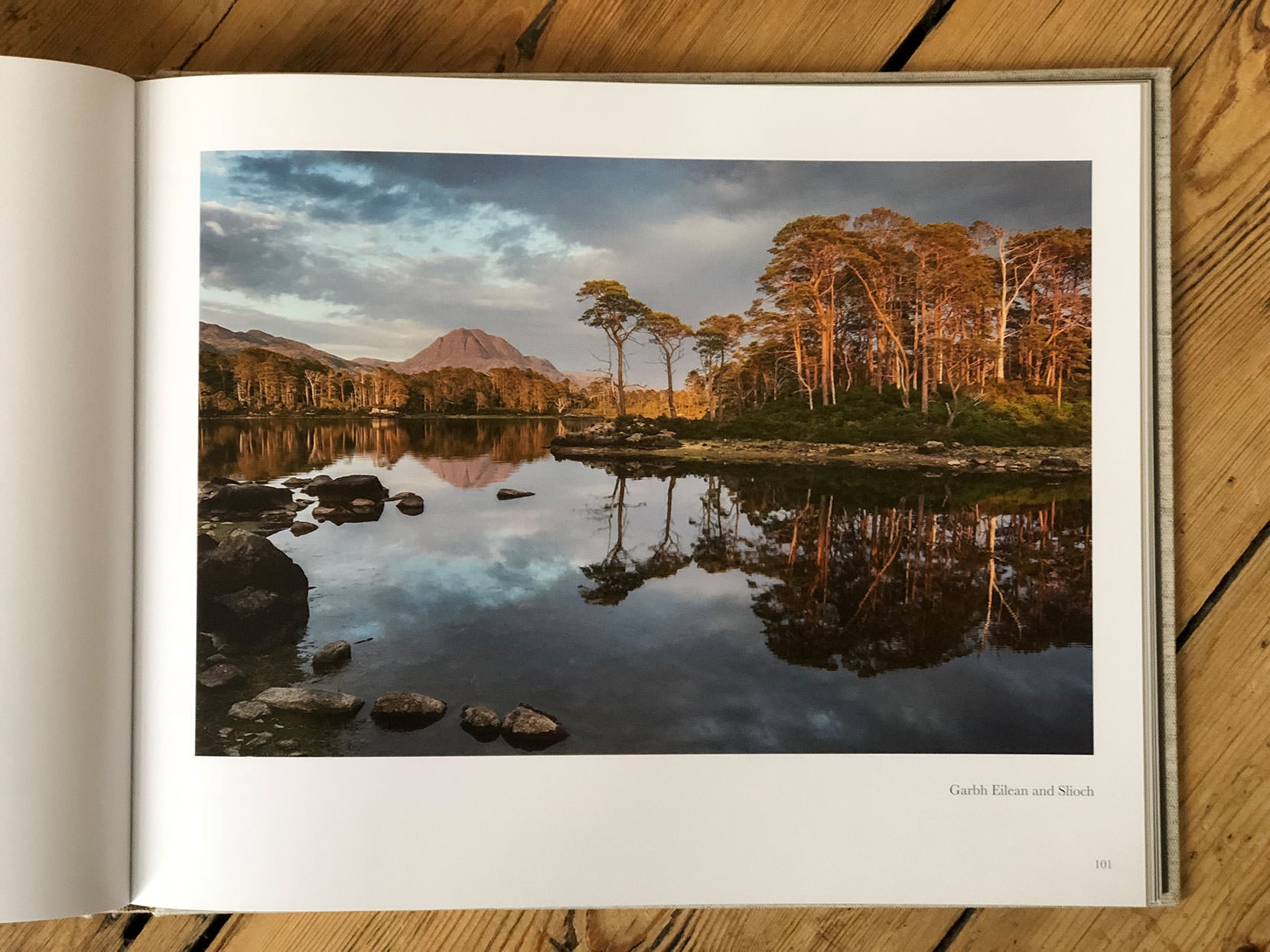 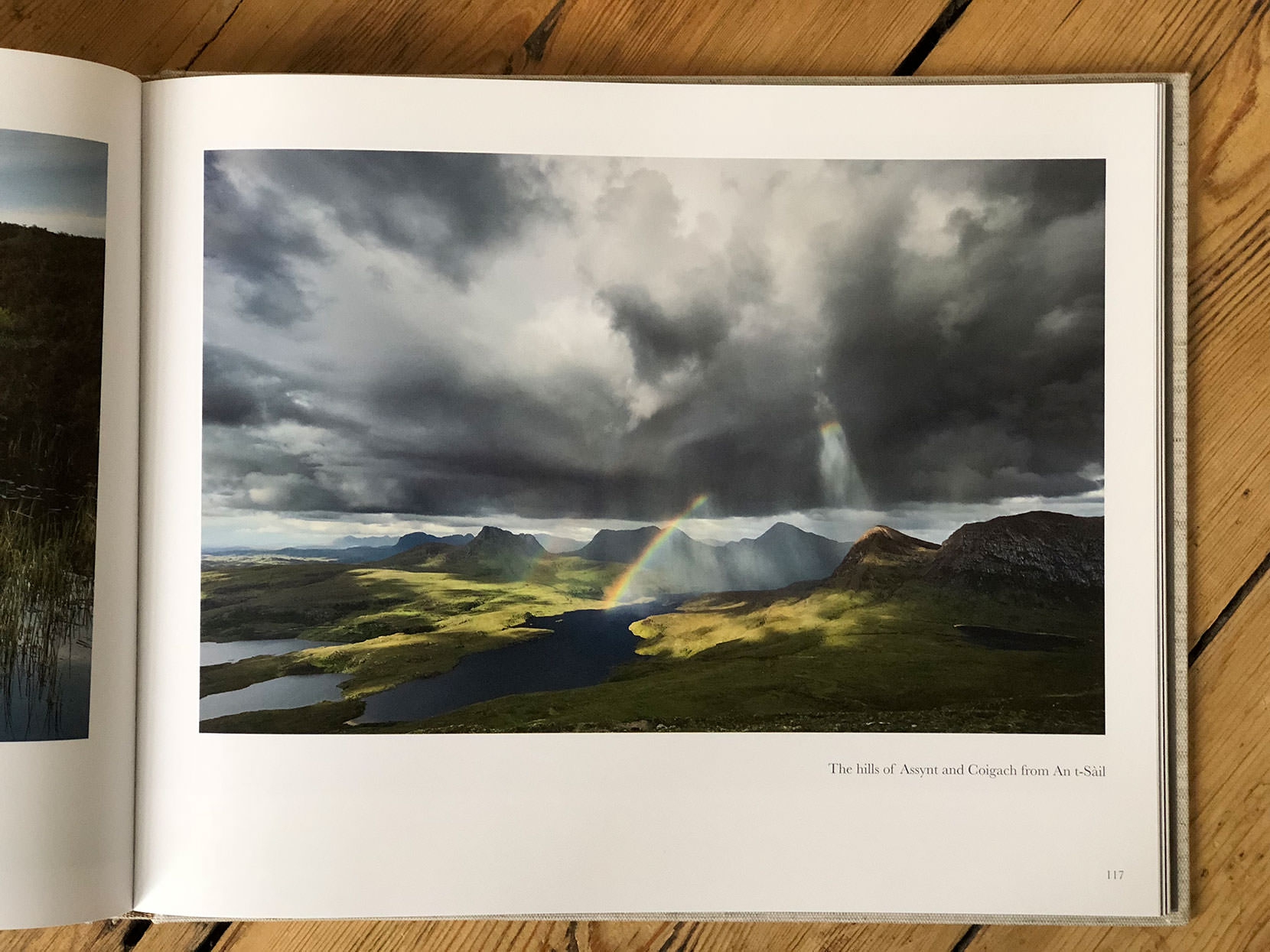