If you’re a devout vista and scenic photographer, a photographer that seeks out good light, who loves compositions whilst embracing the spectacular, then abandon ship right now as this blog post is not for you.

This is Princetown, one of my favourite places in England and a favourite for all the wrong reasons. It’s a small moorland village that seems to ‘specialise in grim’, that most people only experience from the car window when passing through to the western moors. Another reason many do not stop is because Princetown is home to arguably the most notorious prison in the British Isles – HM Prison Dartmoor. Looking like a Victorian workhouse crossed with an asylum, it is a place of legends and dispair, a reputation that is difficult to shake off. It was built in 1802, mainly to house prisoners from the Napoleonic War and now houses over 600 inmates. Historically, Dartmoor is infamous for housing violent criminals, lunatics and sex offenders, but that’s not actually the case with its reduced status. Yet whatever is going on inside, when you catch a glimpse of it from the road, it’s military almost naval presence is overwhelming and enough to put anyone off the idea of a life of crime. 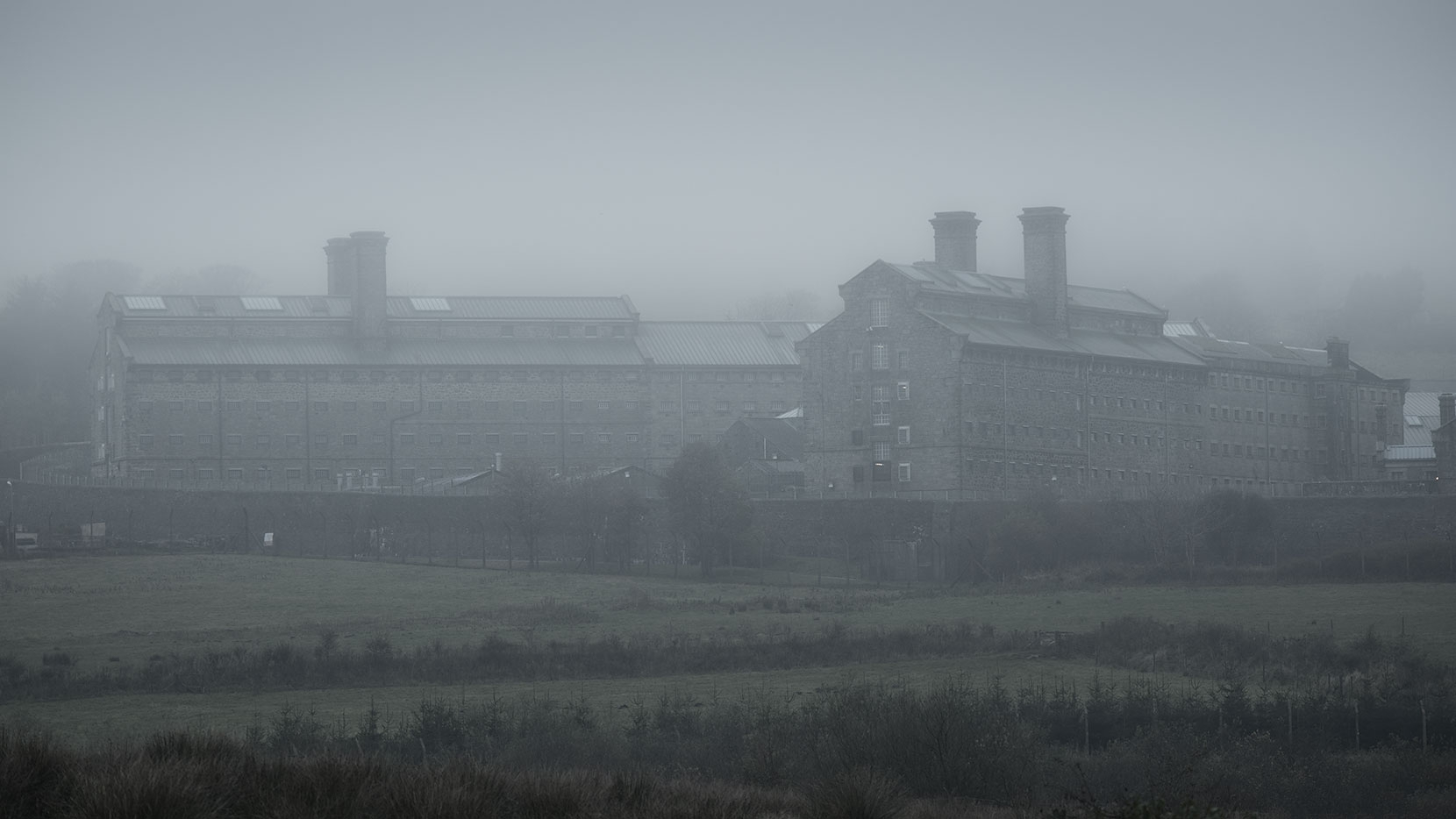 Over the next few months I am going to try to photograph Princetown, primarily in as much thick a fog as I can get. Why? For two reasons - A) It stops me from going photographically stale - B) It makes good use of poor weather. This morning I spent an enjoyable hour with the Canon M3 expanding my appreciation of the town, by walking around its back streets in search of the antithesis of my commercial photography portfolio. It was a quiet Sunday, with most places closed, bar a few out of season cafés catering for the entourage of cycle club outings. Most photographers will find nothing to photograph here, labelling it as 'depressing', but there is an inherant peace in the visual sadness of Princetown that I want to explore. 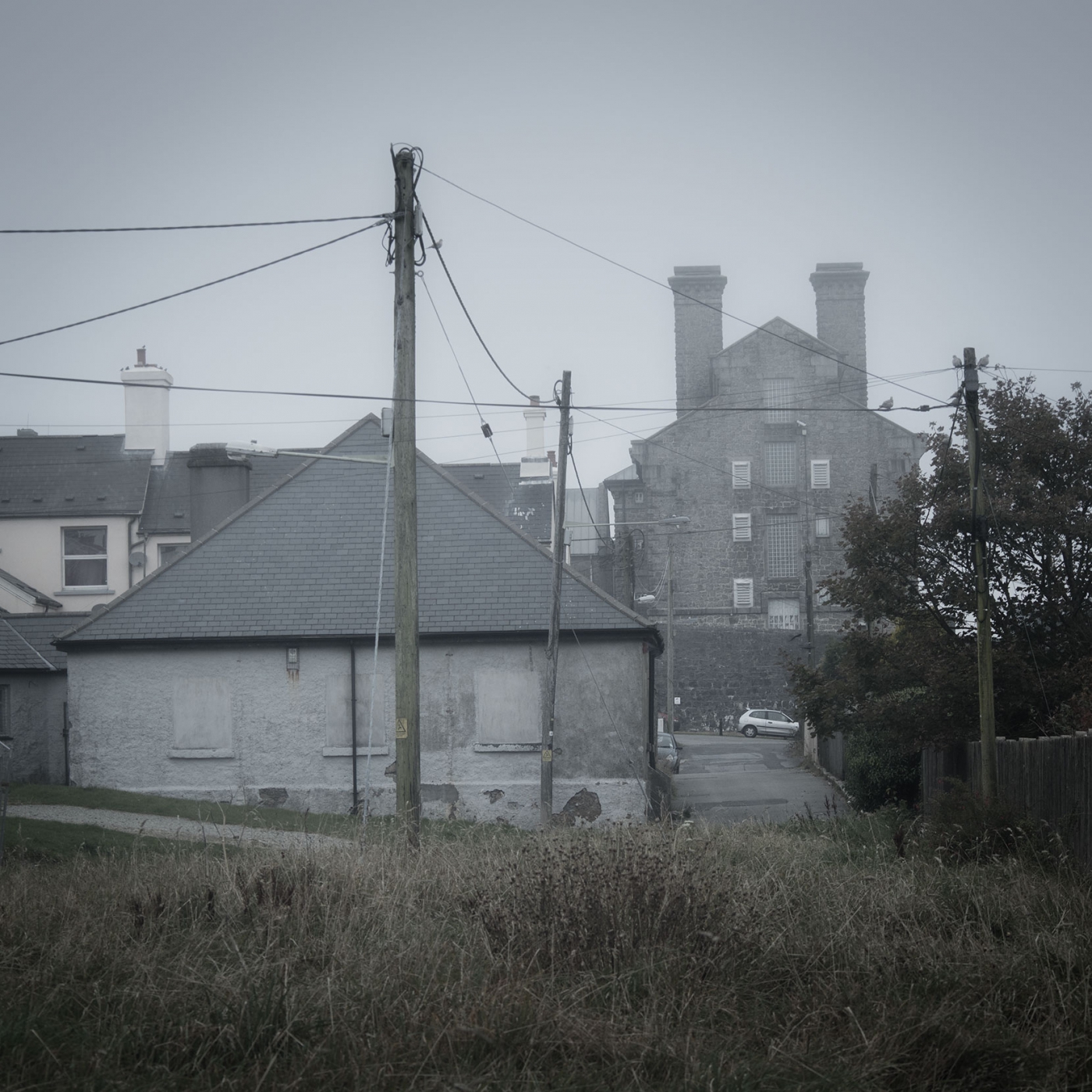 The tragic feel starts with the lack of colour. Today it was a study of granite and slate. The houses and backstreets are empty, the kids are indoors. Damp pebble dash crumbles from the walls, gutters need fixing, green render stains slide down as new builds mingle with 1950’s prefabricated ‘Cornish Units’. As a visitor, you cannot judge the town and certainly cannot judge its inhabitants, but what you can do is capture its unique and characteristic Victorian surface, a mix of Conan Doyle and post war Plymouth struggling to its knees.

As the morning progressed I uncovered a lot of photographic potential. They are mostly switching between 16:9 and 1:1 modes, using the 18-55mm and the 55-200mm. I would definatley like to shoot this on black and film using my old 1962 Mamiya C3, which would be perfect for the job. 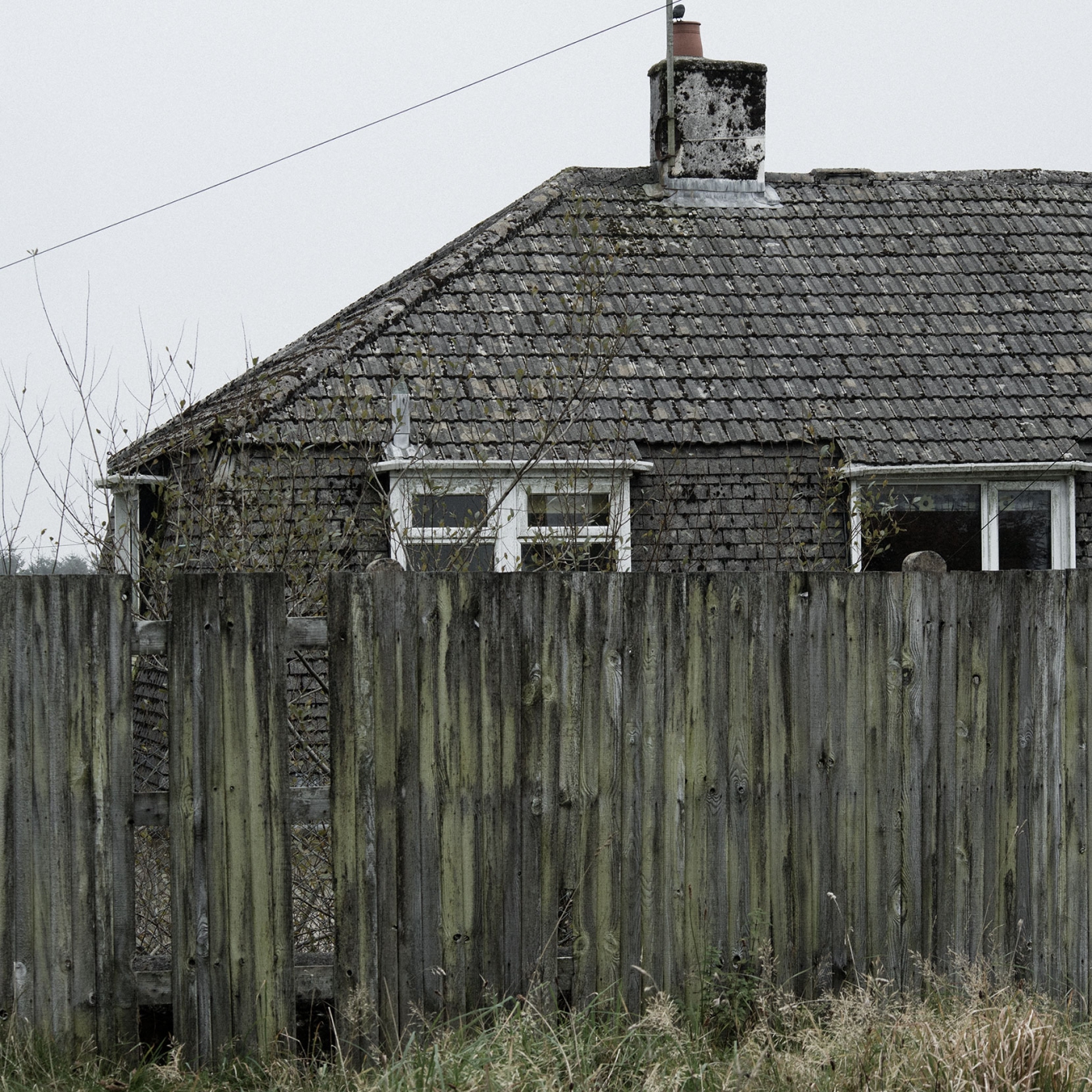 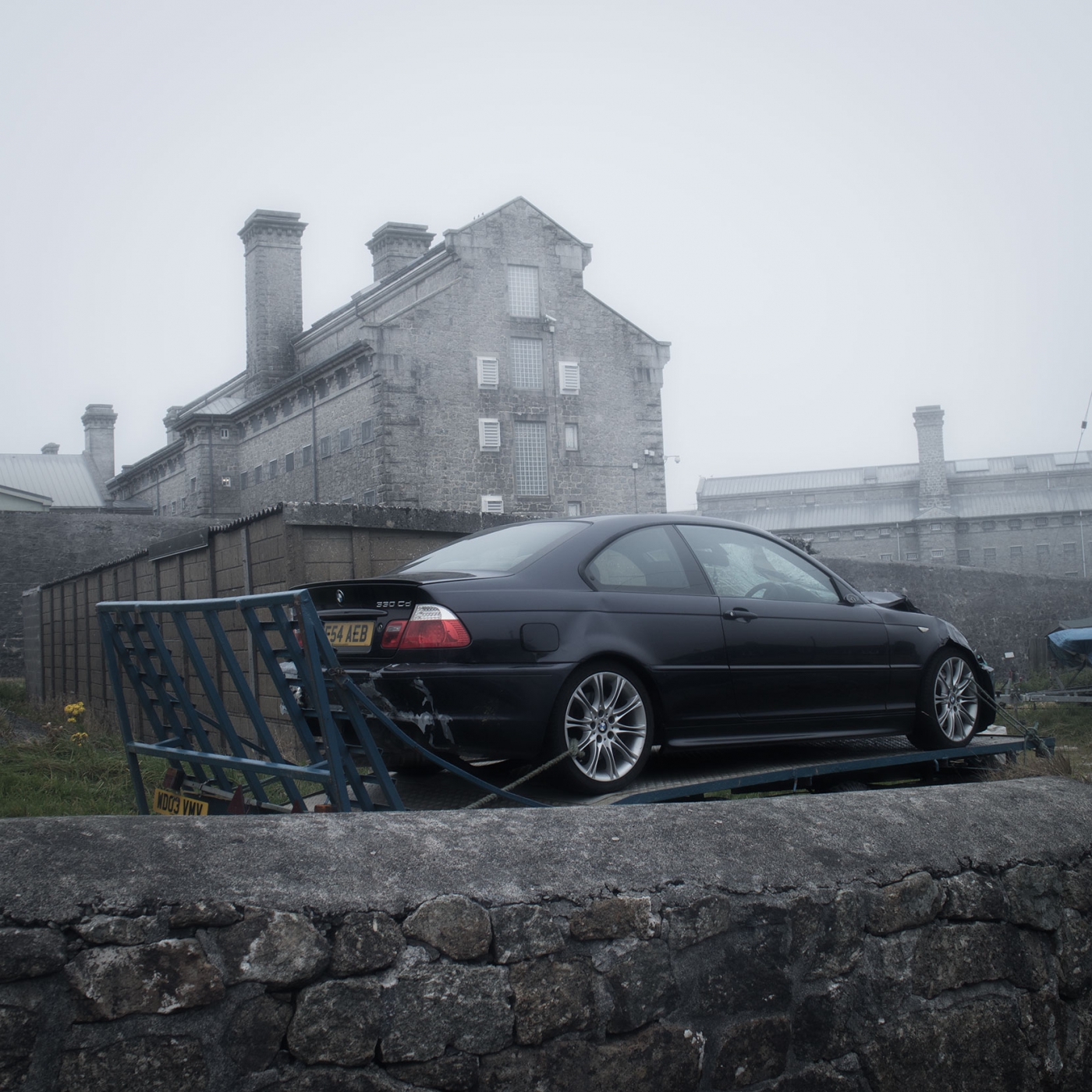 I came across this BMW on a trailer that had been involved in a heavy impact. Was it simply a moorland recovery? The foggy prison just added to the narrative, but from examining the damage it looked as though the car had been involved in an impact with a cow. The wing and bonnet was compacted rather than smashed whilst the bumper was left unscathed. It’s a sad situation, but many animals die from excessive speeding, often in poor weather conditions. Many of the cattle are black or dark brown, so speeding is literally for the stupid. 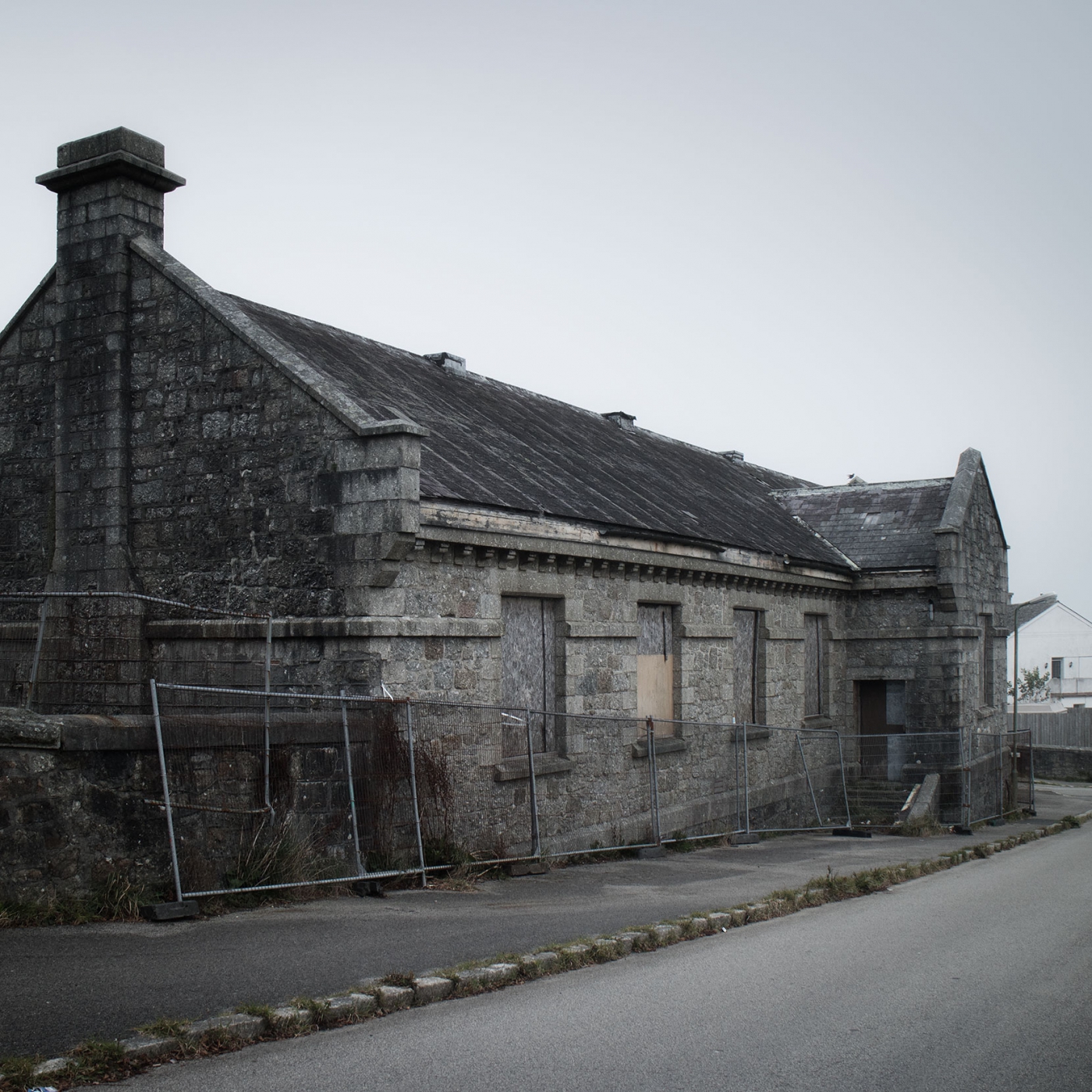 A few derelict buildings sit among residential cul-de-sacs and closes, like this one above which I think is an old school. Surrounded by metal hoarding, this wonderful granite building is located on the high-street yet it has fallen into complete disarray. I found it to be particularly magnetic with its damp pine board windows, but not so easy to photograph. It’s this contradiction bordering on dereliction that makes Princetown a wonderful place to study, with or without a camera.

On the Tavistock Road

There are quite a few shops and cafes now permanently closed on Princetown’s main high-street, which paints feelings of hard times and recession. You start realising that this simple road, clean, tidy and spaciously paved, has little life other than a few residential flats overhead. Lord's Cafe and Takeway was locked up, its post box taped shut, mail to be redirected... 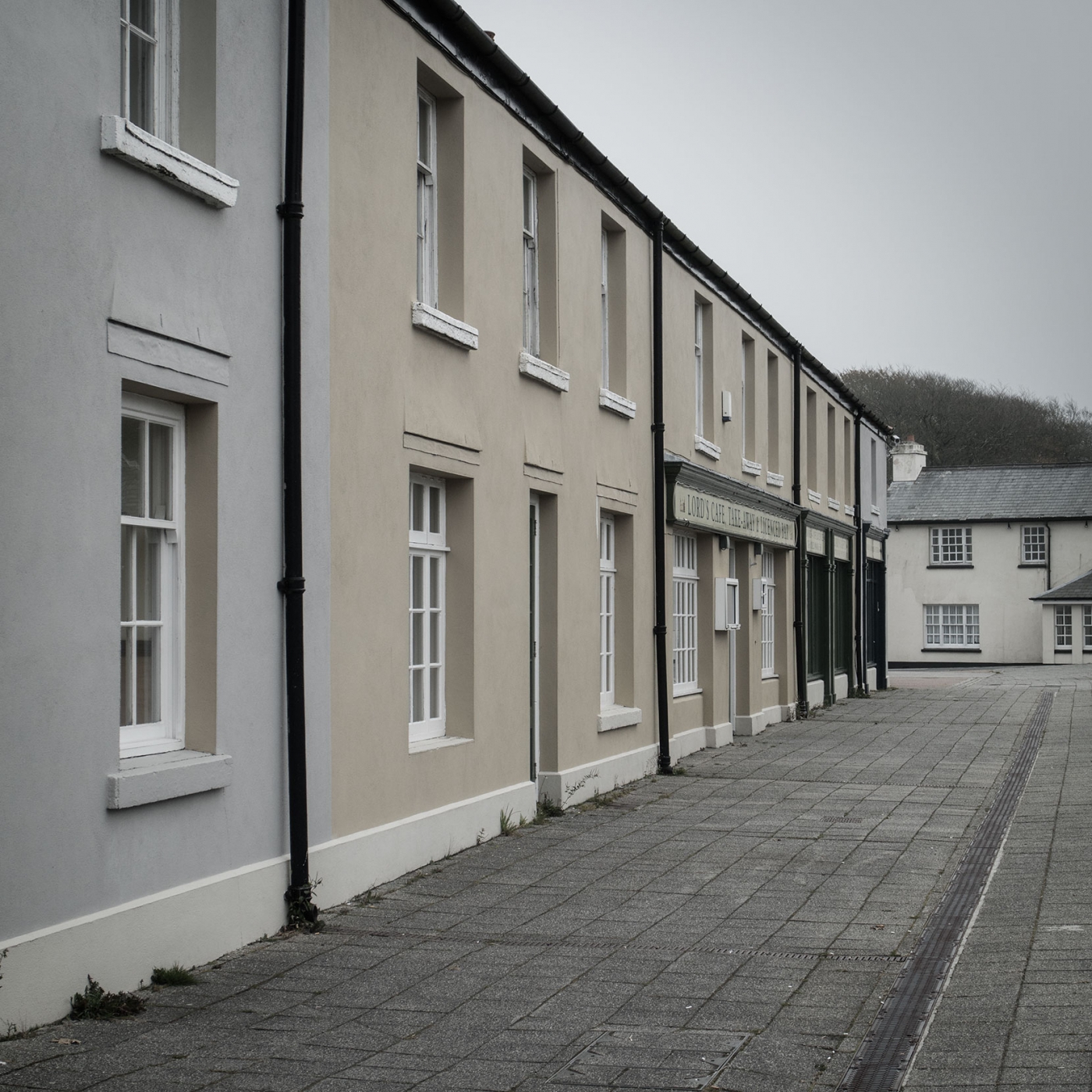 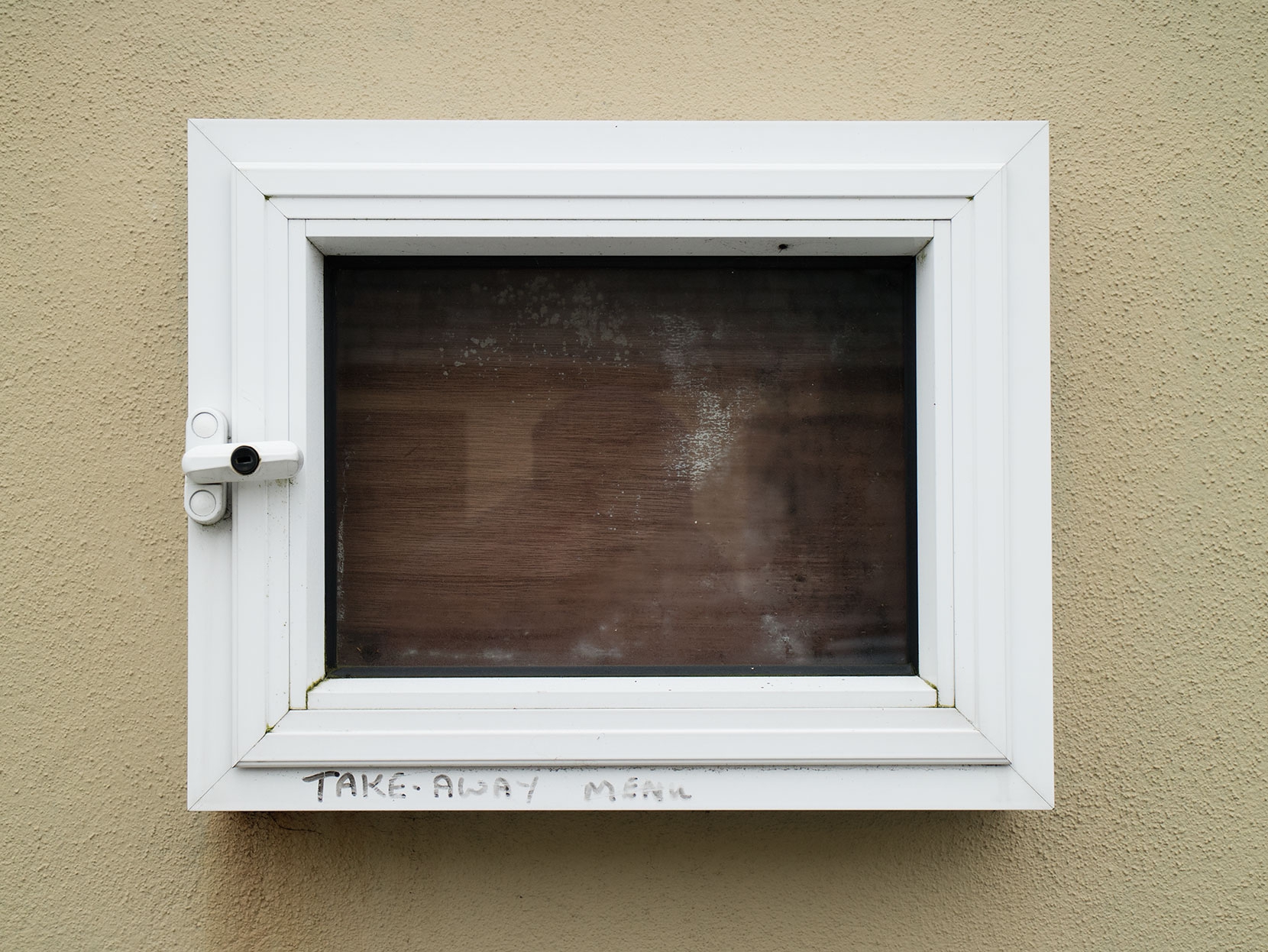 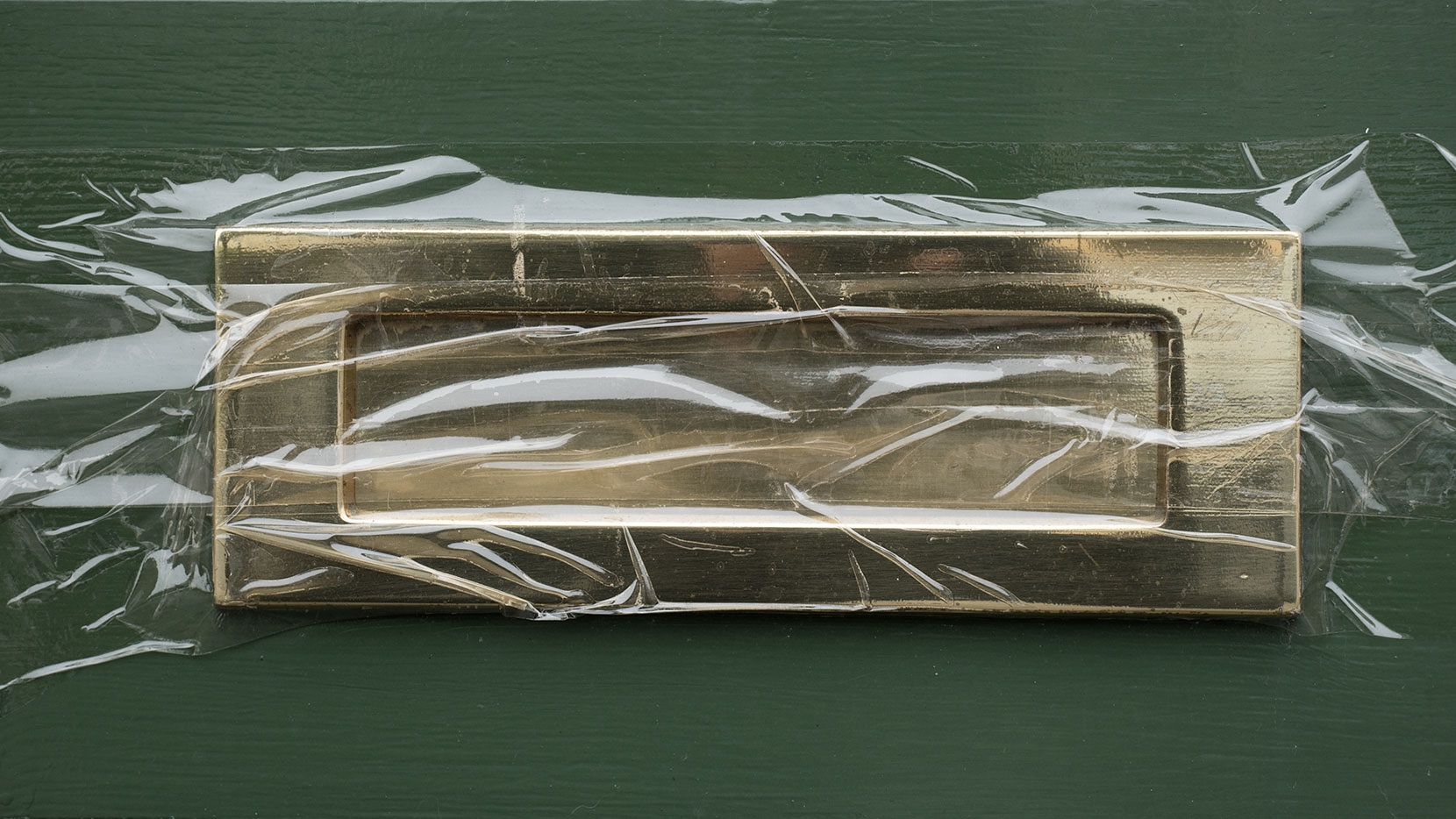 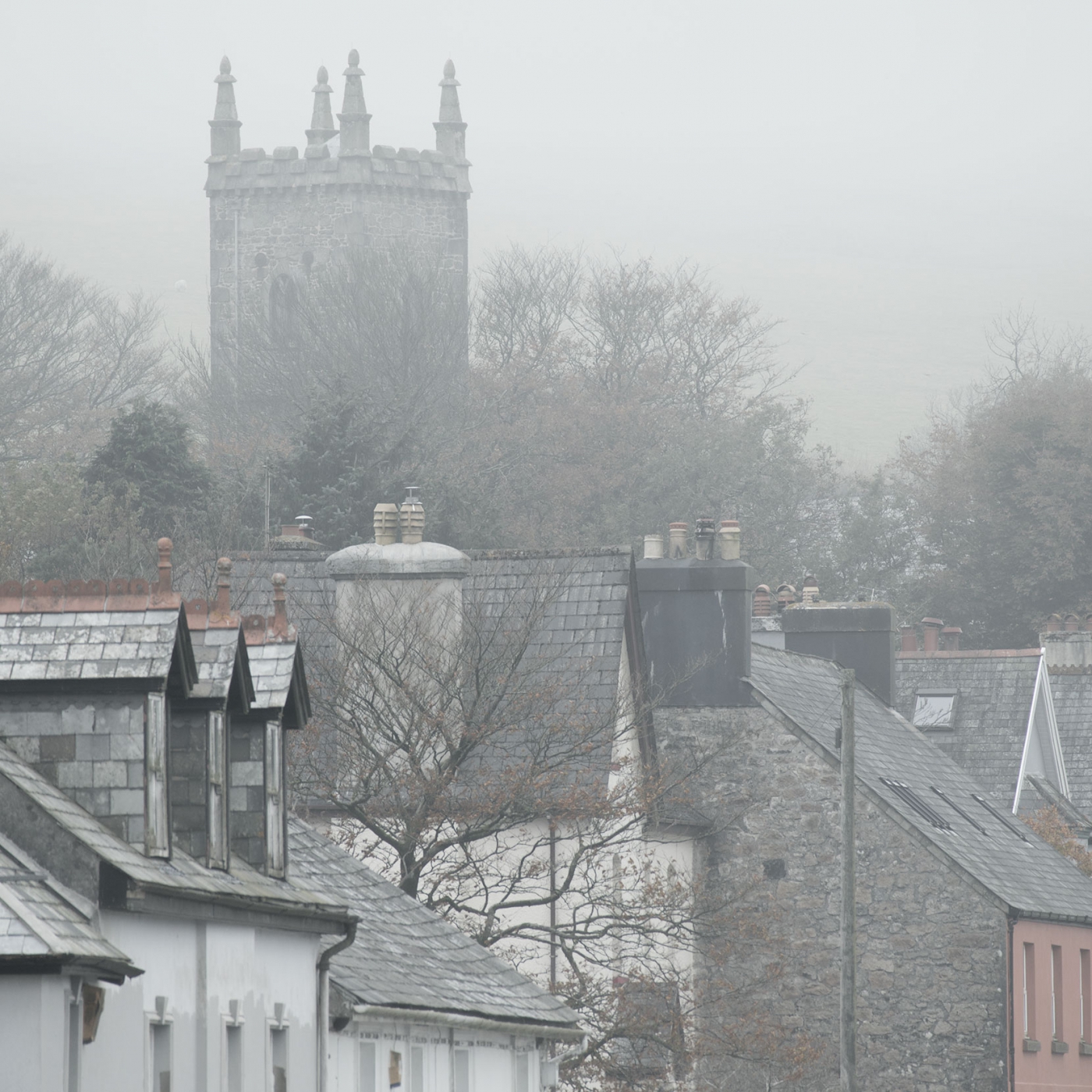 So what did I learn from all of this? I require a number of formats 16:9, 1:1 and possibly 4:3. As soon as I shoot in 3:2 then the images look too obvious. I also need people in these images and my photography needs to experiment with their interaction. I missed a rather memorable moment involving an old lady and a yapping Chihuahua as I rounded a corner – so I need to spend more time in one spot waiting for the story to unfold.

I have also learned that until I understand the subject a little better, fog will be the right medium. Fog is a common to life in Princetown after all and it is very much how we remember Dartmoor. During my walk I kept imaging diffused sodium street lamps, infectious orange fog and darkened shadows. I’m certain a foggy morning, at dawn or dusk, will be the perfect place to start, that Princetown will become my haunt when the vistas are completely out of the question.

A Final Note About The Foggy Square

In my photographic lifetime, fog has become a genre all of its own. It's an antidote for the chaotic, adding depth to woodlands, releaving them of their interlocking branches and adds mystery to everyday urban life. Yet its overuse in modern artistic / fine art photography sails cliché waters. A photograph in the fog has to include something special that the fog enhances, or it simply falls flat. So it is important to remain careful that it doesn't just become a tasteless main course on the somewhat photographic set menu. You know what I mean - flat light, 10stop, square crop, Silver Efex and a heavy vignette - it seems that this is all it takes to elevate the mediocre to the status of exhibition credible.

The revered master Michael Kenna has made explosive impact on our 'fogtography', but his global approach, simplistic subject matter and use of glowing yet diffused light is what makes them captivating on the eye. In 2010, as popularity for the style increased, the subsequent mass copying in less than ideal conditions diluted the genre. Very few of the new artists on the block made anything interesting enough in my opinion. In the same flat light, I feel similar despair for modern landscape photography - from the thoughtless rock in the foreground trick, to the crushed and overprocessed Milky Way now looming over everything - it's sensationalism and nothing more. As photography's popularity has grown, we have earned our access pass to an extensive kitbag and even more extensive travel tickets. Yet it seems that we have also become less imaginative or refined enough to explore the everyday too. We should perhaps apply our local efforts with what drive we exert in exotic locations. Easily pleased and on a crusade for nothing more than the relentless quest for the ‘perfect postcard’ - perhaps the soul we crave in our phototgraphy is closer to home than we think. Or is it me? Has the fog simply got to my brain?

So may I conclude that herein lies the point of my Princetown project - diversity. This was simply a one hour backstreet recce - it's not even started. As winter comes I'll be visiting Princetown for more than a coffee and a slice of Victoria sponge.