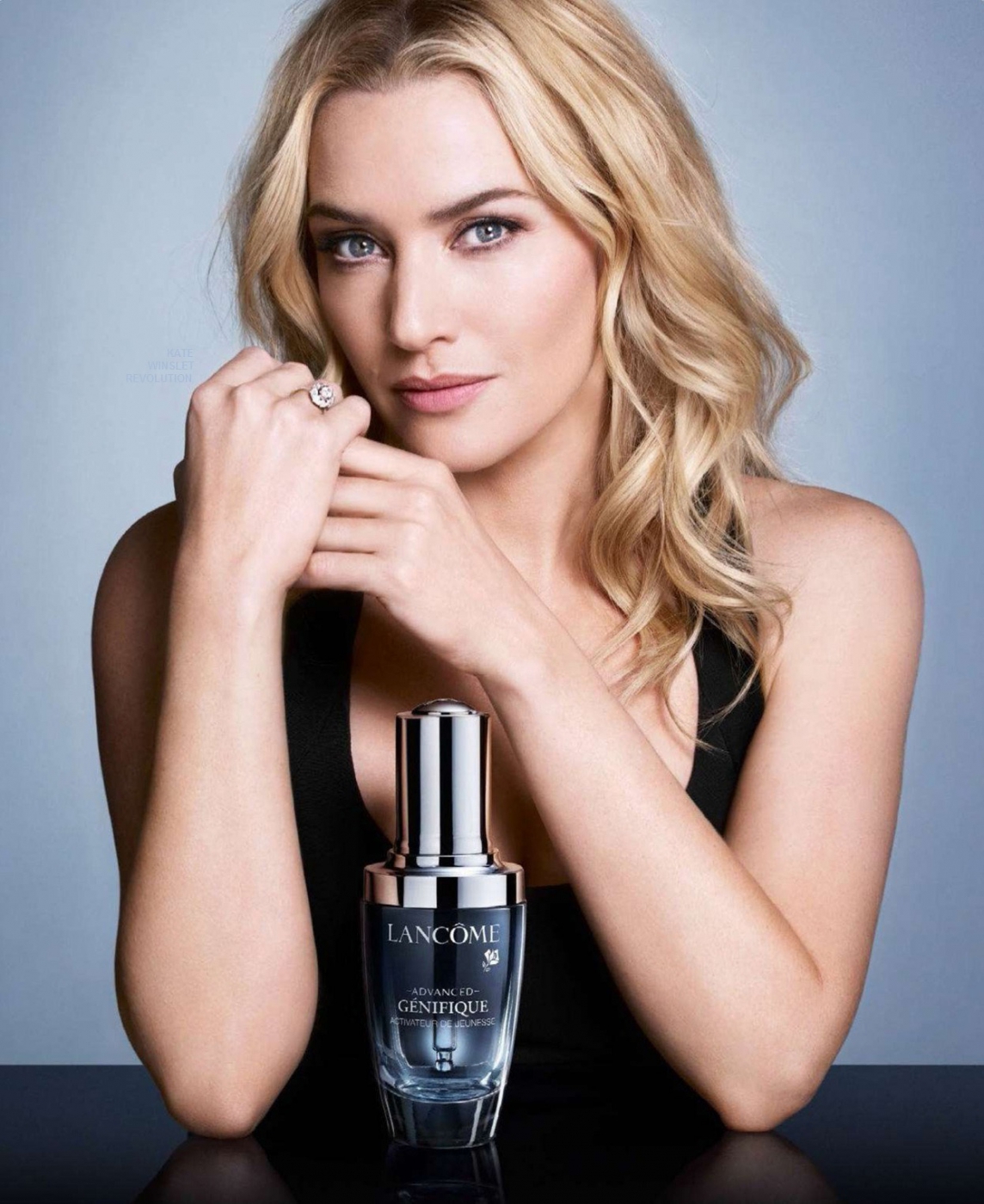 SOMETHING"S NOT QUITE RIGHT - The new Lancome June 2015 advertising campaign.

Have a good look at this mesmerising image of Kate Winslet. It's utterly spell binding isn’t it. Now shake you're head and come to your senses. This is not a photograph - you’re not looking at a real photograph of a woman - you’re looking at a 'synthetic'. Now go to Google Images and have a look at some real world Kate, a few wrinkles and then return to this image for for a second look. Wow, she looks incredible doesn’t she… you have just fallen in love with a computer.

I love going shopping with Rachel, but rarely do I have anything to buy. I am fascinated by high street clothes shopping; watching shoppers and wondering how big brand advertising effects their choices and their day. It’s immersive because it constantly changes and it’s this illusion keeps us returning for a fix. We all clothes shop because we need clothes - comfortable, functional and stylish clothing, but more regular shoppers are absorbed in an experience far more captivating than the actual clothing itself. It’s this magic spell that keeps us coming back, again and again.. 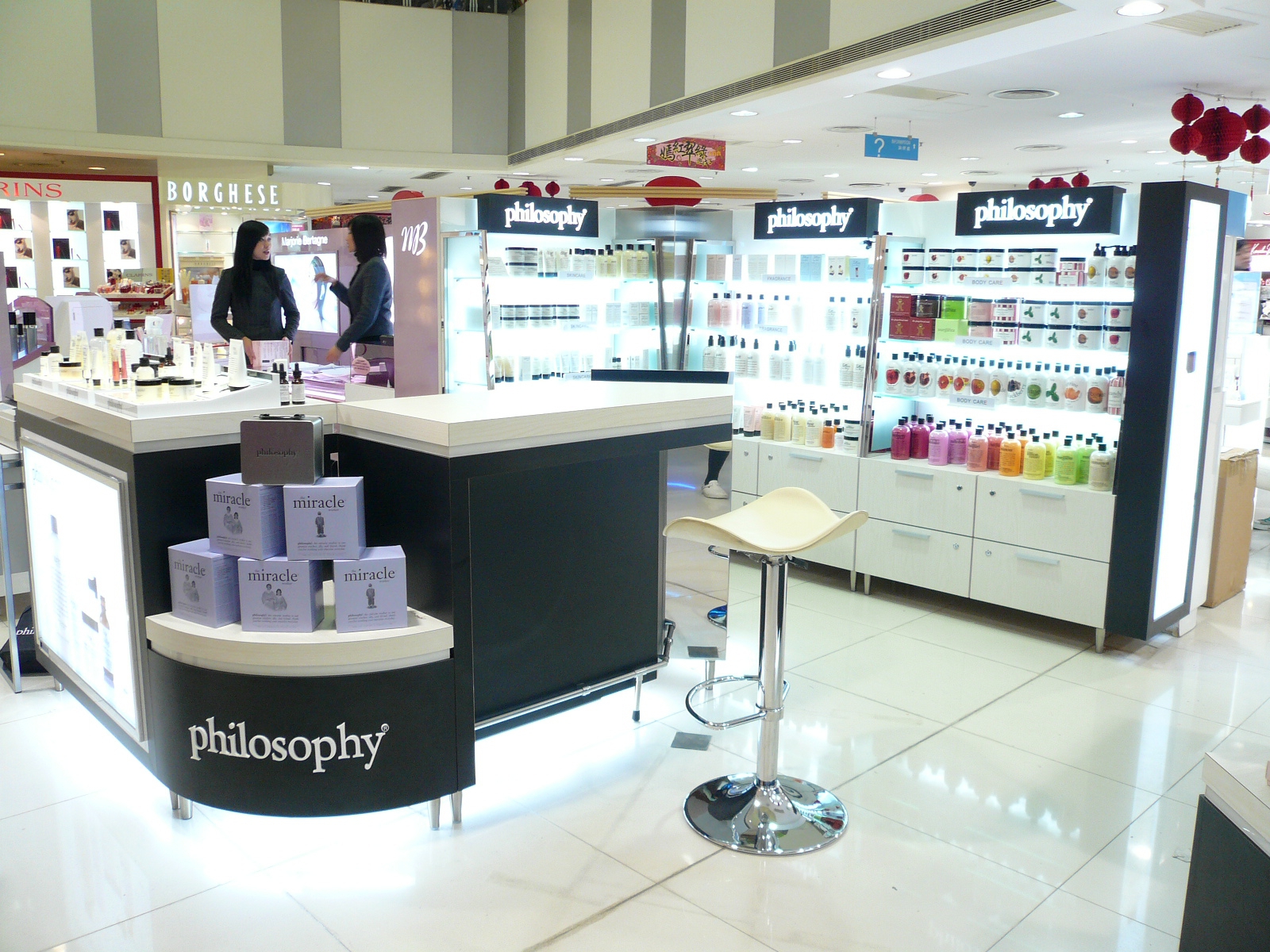 A TYPICAL MAKE UP COUNTER - On the control deck of a makeup spaceship...

I think the most interesting example of a shopping utopia has to be the franchise The House of Fraser. It’s makeup department could actually be in orbit. The shop floor glows as perfect girls float past softly underlit glass counters, filled with exquisite design, shapes, colours and aroma. You dare to look, uncertain you can ever fit in to this perfect world and it was here that Kate Winslet in the Lancome advert above, stopped me in my tracks. It was the perfect setting for a instant visual love affair.

Now Kate could be a Roman goddess. Why she hasn’t played one yet I have no idea. She has one of those faces that goes with any hair colour, a face that is just perfect for digital retouching; great cheekbones, beautiful eyes… but in reality she’s a bit too normal, in other words she’s not a super model and her involvement by association is what we love about her. Although we melt at her heartwarming, vulnerable performances, like ‘The Holiday’ with Jack Black and Cameron Diaz, the Kate that she is doesn’t fit the Lancome product without digital assistance. Face Kate towards the camera and she delivers a seductive feminine smile straight out of her acting draw and BAM, we have the ingredients for Super Kate, which Photoshop can transcend into goddess next door. 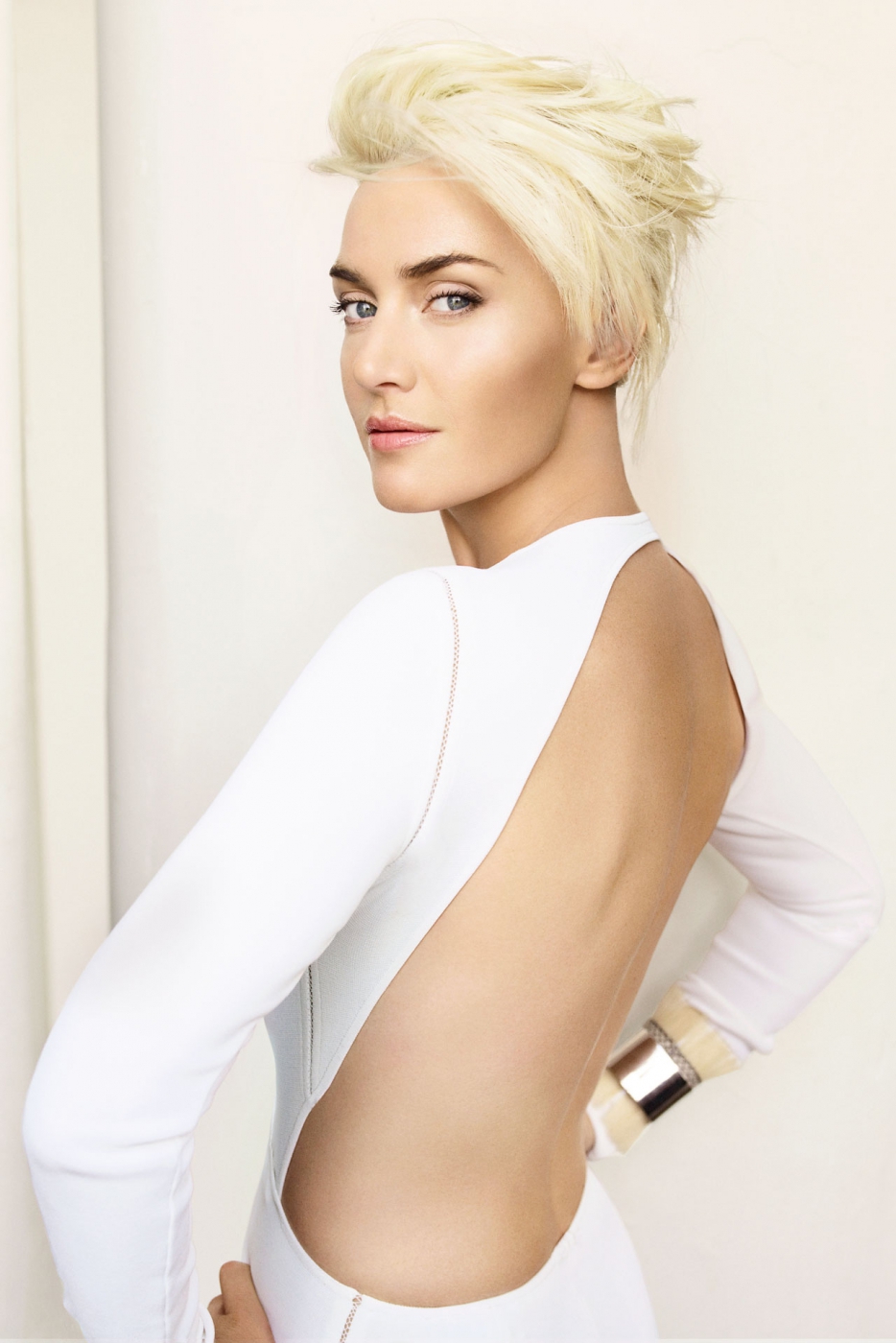 THE SAME PERSON? - Perhaps the essense is Kate Winslet, but the rest isn't. Outside the space age clothing and hair, her space age face geometry has never looked so chiselled. Both trademark moles have been removed too. 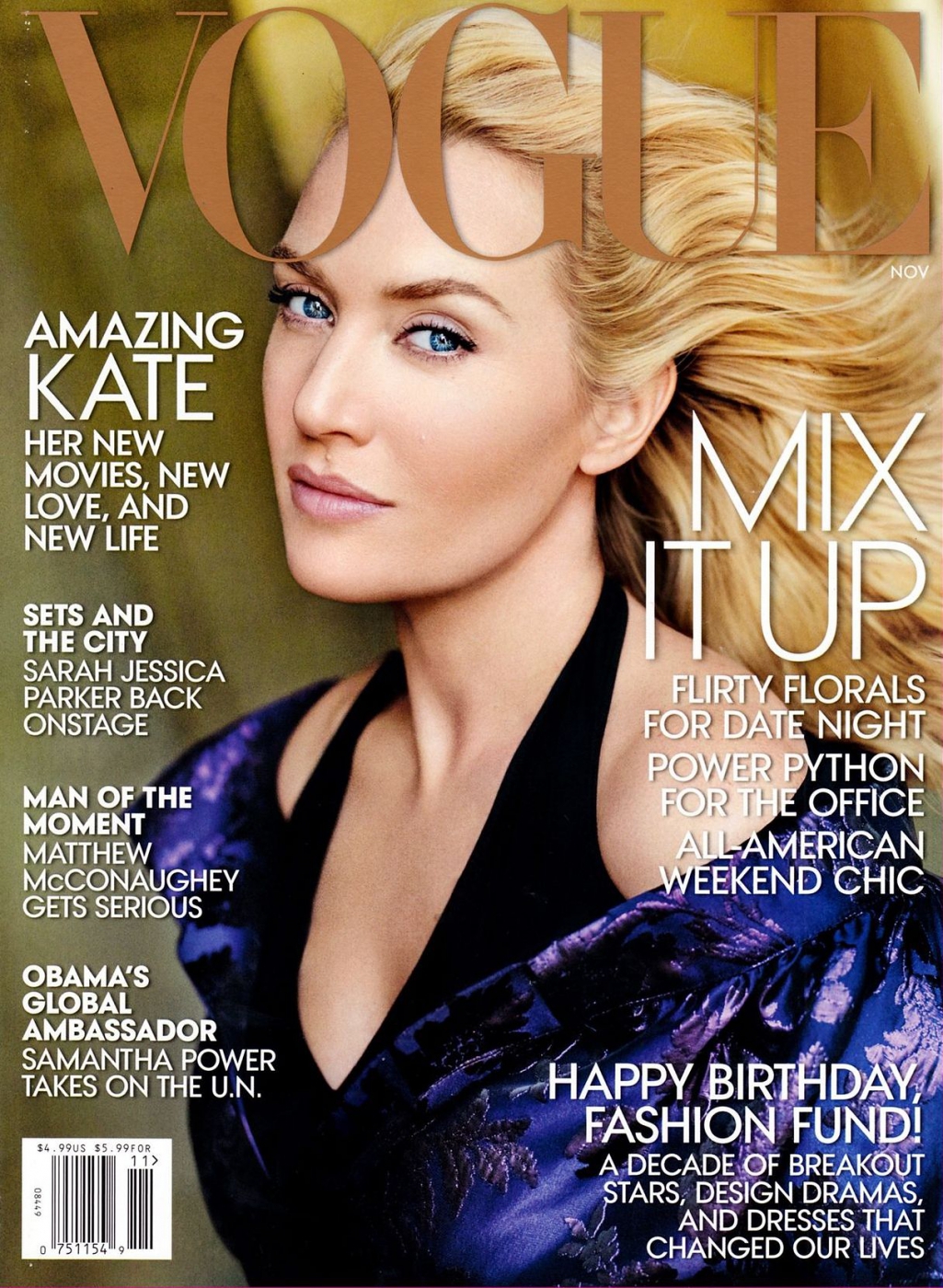 BARELY RECOGNISABLE -  the dimensions of her face look inaccurate and we loose her identity. Seconds later we forget this disconnection and then warm to her 'new look'. Just who is her personal trainer?

Kate has fallen foul to the ’excessive retouching’ calamity before. An infamous GQ shoot is a great example of how computers retouching can create initial disbelief, fascination and then mass adoration, despite the fact its a complete travesty. Apparently she was very anti Photoshop in this modelling period and was appalled at the level of work done, but the 2015 Lancome advert does little to convince us that, nearing her 40’s, she upholds the same opinion. No doubt, there have been some absolutely wonderful photographers who have captured her over the years. A famous Vanity Fair shoot was apparently to have Kate insist on makeup and lighting only, no Photoshop. If it was truthful (and we can never really tell) the results were classy, sexy and captivating. 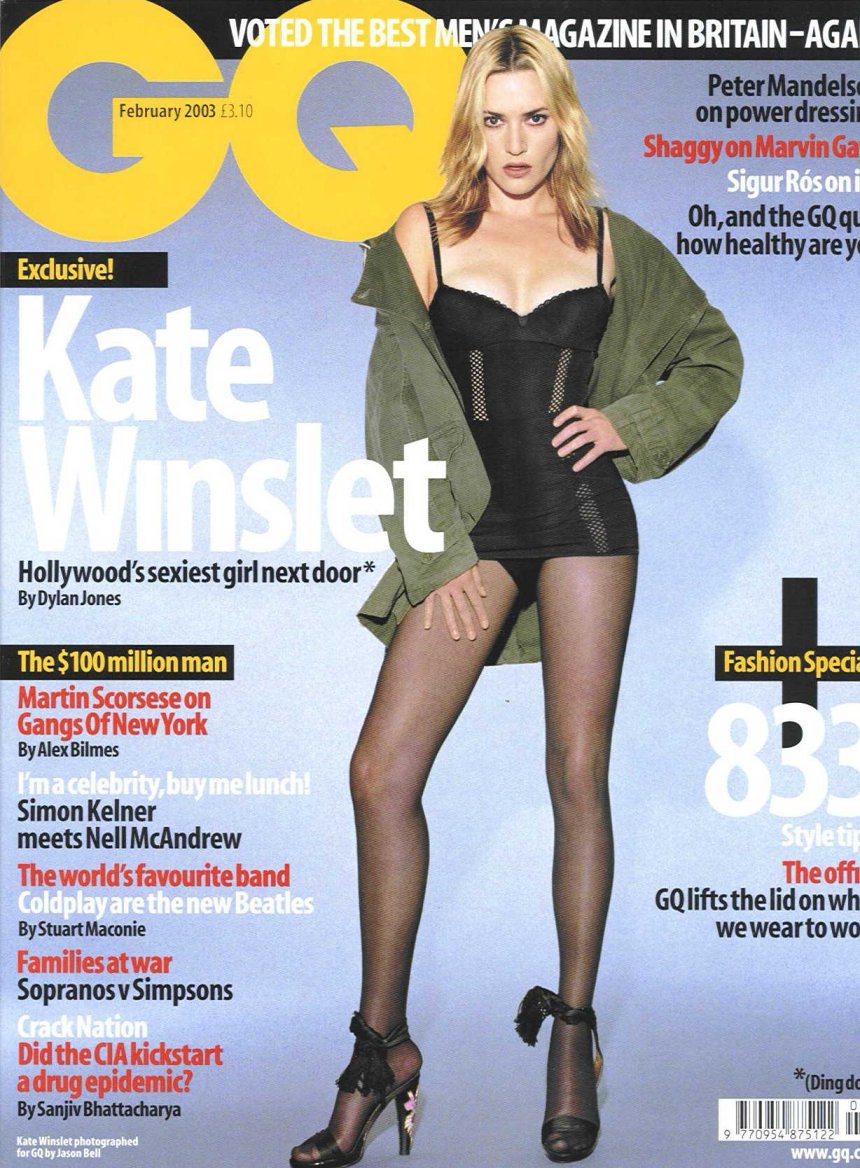 A DIFFERENT BODY - this was a 2003, which apparently caused her famous quote abou not 'desiring to look like this' - GQ said they don't care who is on the cover, they all have work done.

Now for my conclusion - Who has been watching the series ‘Humans’ on Channel 4? It’s been a fabulous insight into a age old science fiction concept, that synthetic artificial life forms will walk among us and that they could successfully assist us in our mundane human lives. As usual, it doesn’t quite turn out as expected. A perfect household cyborg, Anita, becomes a source of fantasy for the family’s 16 year old lad. Her firmware gets modified to Adult Mode as she then becomes a sex toy to console Dad in his marital crisis….’she’s only a robot’ after all… So whilst gazing upon this image of Super Kate this afternoon, I wondered how many men would be pinned to the spot by this magnetic ‘synthetic’, the only reassurance to the real person being replays from our movie memory banks. 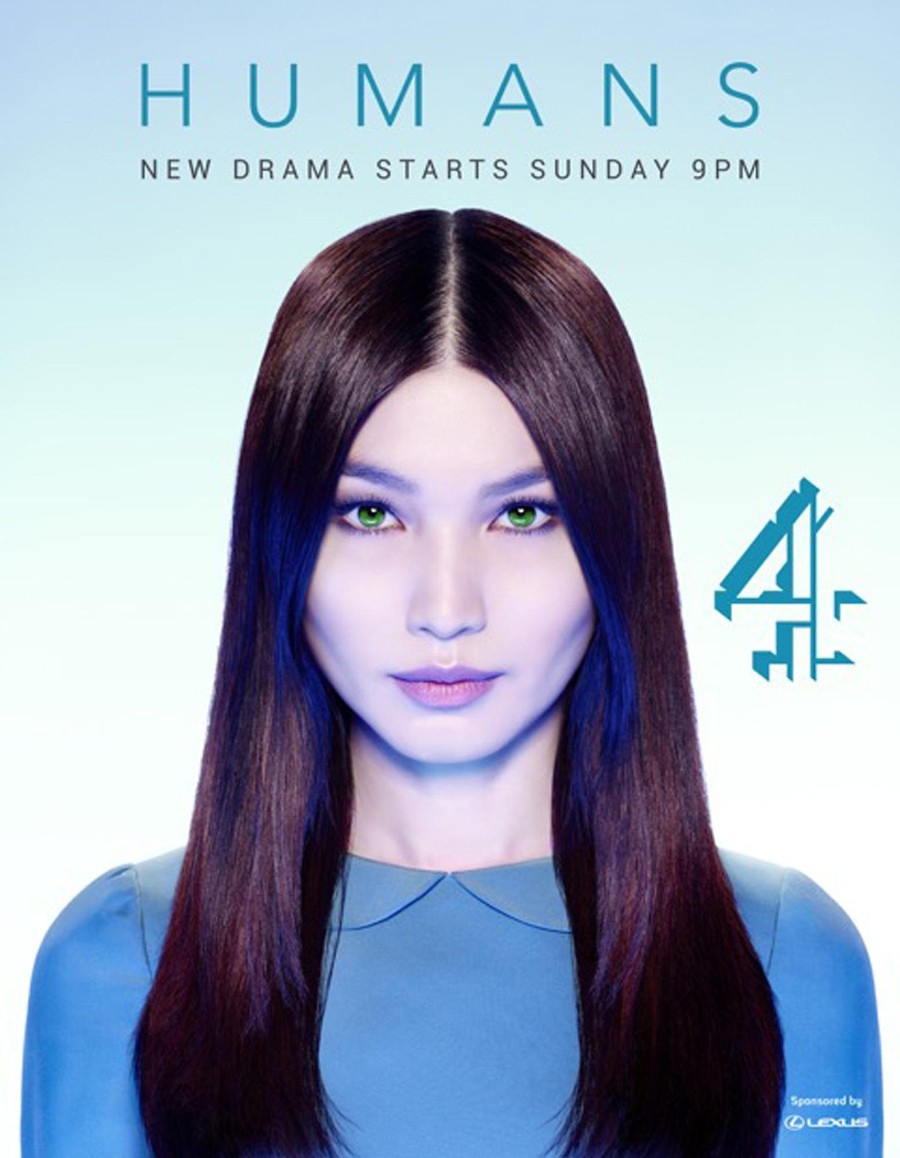 HUMANS - The concept was a very interesting one, look at the symmetry of her hair....

Back to Lancome - Kate had become an advertising cyborg in her own right. The thinned arms, extended face and flawless skin - it takes a while to find her in there, but she’s there. Buried behind the computer facade lies that all important human smile, that allure that only Kate can deliver, the look that retouchers build upon layer mask after layer mask. Without that seductive smile, she’s just an auto-tuned performance of a song without meaning. The illusion falls quickly apart, as those heavily retouched, virtually unrecognisable images above so clearly show. 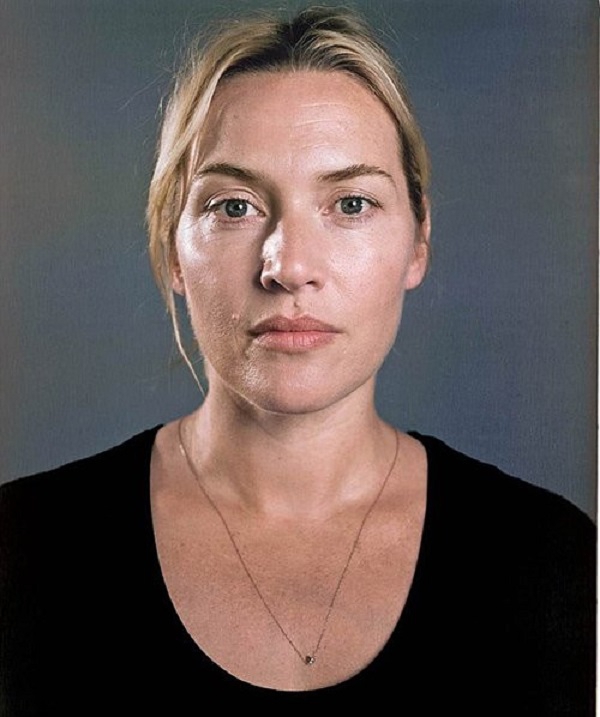 FINALLY - unflattering as the lighting may be at last here is a 'photograph' of Kate Winslet. Excuse the artifacts.

I believe she will remain interesting to watch, as she is one of the most inconsistent models out there. Is it all yo-yo weight? The's had three children remember... One could say this shape shifting is a fundamental strength like all actresses who make the crossover, but it will be interesting to see what happens to her, as computers and retouchers also begin to mature alongside the screen legend.