Brooklyn Bridge at Dusk
As with all older bridges, they need maintenance... so guess what, thats right - there's plastic sheeting and tarpaulin over half the walkways on the bridge. I couldnt believe it. So after heading half way over the bridge moaning for the most of the way, my spirits were lifted when I found this maintenance free viewpoint.

Here's the most wonderful opportunity to shoot traffic trails I have had to date. There is so much traffic belting over the bridge that they create superb lines that take the eye right towards the city. But with traffic comes vibrations and its surprising just how much this bridge moves about. A sharp shot would be down to timing. 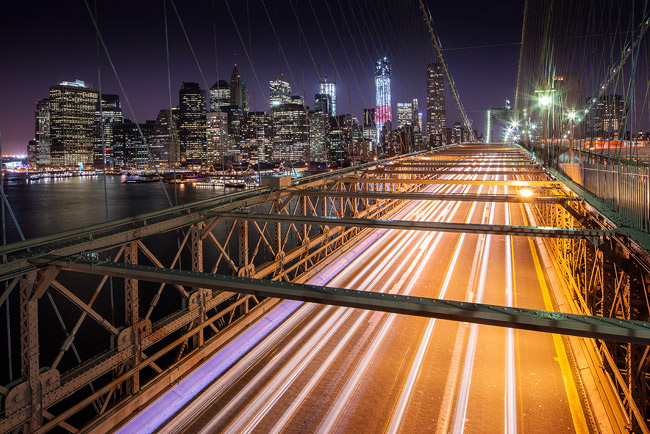 Pick your moment. Ensure that your tripod is stable and be aware of vibrations at all times. A truck will create more movement than a few cars, so its best to ensure avoid exposure when anything larger is rumbling towards the camera. The upper bridge floor, where I am positioned, is old wooden slats, so this makes it sensitive to bicycles and others standing close to the tripod. Watch the people around you at all times.

PROCESSING  - It was relatively easy. I have blended two images with different white balances to get full control of the oranges. Sodium lighting can be controlled effectively in this way, so I blended a 5000k image for the skyline with a 3200k for the road, which makes for a far better colour palette. I used Smart Objects when converting, so adjustments to colour temperature can be made throughout the processing.

Shooting the Spiderweb - B&W or Colour?

These are the remarkable suspension cables that span the Brooklyn Bridge. The walkway and cycletrack is surprisingly narrow here, maybe eight feet wide at maximum. Its fairly crazy to say the least with load mouth cyclists shouting at tourists who dare put a foot into their lane. 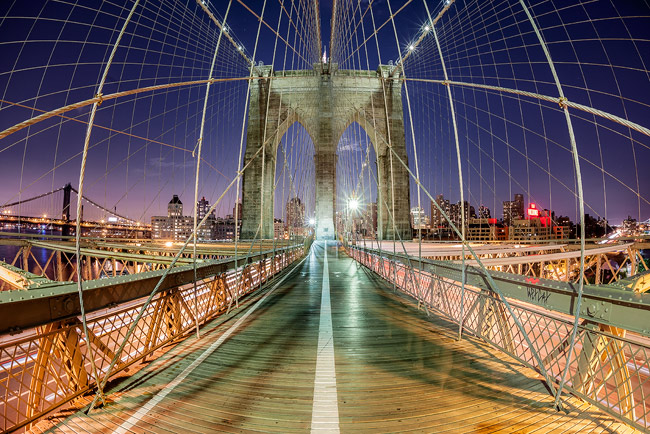 I have numerous images taken from this point, but I think this one is the most interesting. The Sigma works absolute miracles with the perpective and I am always reaching for it when shooting architecture. The painted white line in the centre is not absolutely central at the this point, so after some careful decision making, I aligned the composition the best I could. I waited for the biggest gap I could before shooting.

PROCESSING  - This is a single shot, no blending here, but it looks a little 'assembled' due to the multiple light sources. Again, The magic is in the timing, ensuring that the photograph is taken at the right point. You'll find me running around like a lunatic for around 10mins when the balance is correct. 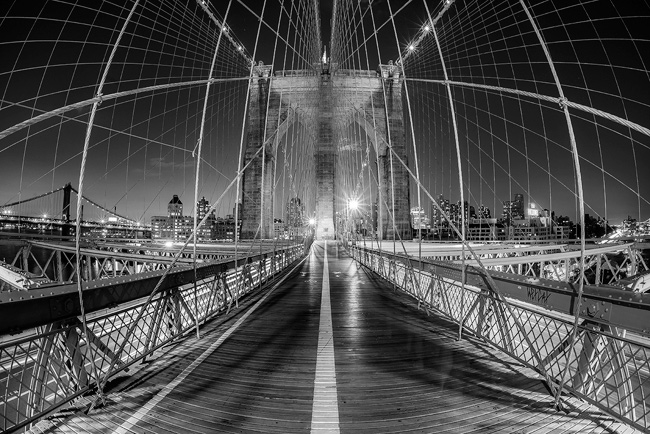 Converted in Photoshop, no need for plugins. I have pulled the midtones down which works better.

This is using the good old trusty B&W Filter in Photoshop. There are so many colours that the sliders respond very well to the adjustments, especially, blue, red and magenta. I have made further luminosity adjustments to the image, to make it sit together better as a B&W. I think both have their strengths, but please add your comment below if you feel like doing so.

Ok, off downtown again. Tonight I have to shoot the Rockerfeller Centre, either from below or above. The city lights were remarkable last night, with the Empire State Building lit in multiple colours. Its a shame I was so far from it at the time... Signing off...