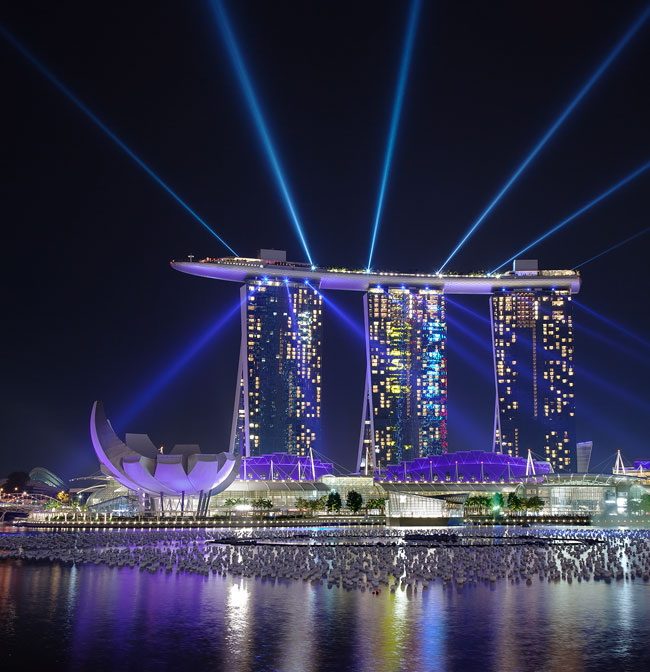 MARINA CENTRE AND THE THEATRE ON THE BAY - This photographed from the same place as the shot above. It's remarkable to see the difference in twenty degrees to the left. The large spiky building on the left is the 'Durian' (which is a traditional fleshy fruit that is similar to swallowing perfumed snot, believe me its weird).

TECH - This is a 9 shot blend and stitch using the remarkable PTGui. I can't recommend it enough for complex and hi contrast cityscapes and interiors. The intial captures were 3x3shot AEB at (-2 0 +2) to capture the entire range of light levels. Once put into the software the Exposure Fusion settings have simple but effective control of the lighting, so much so I use the software to blend images without the need of its panorama facilities. 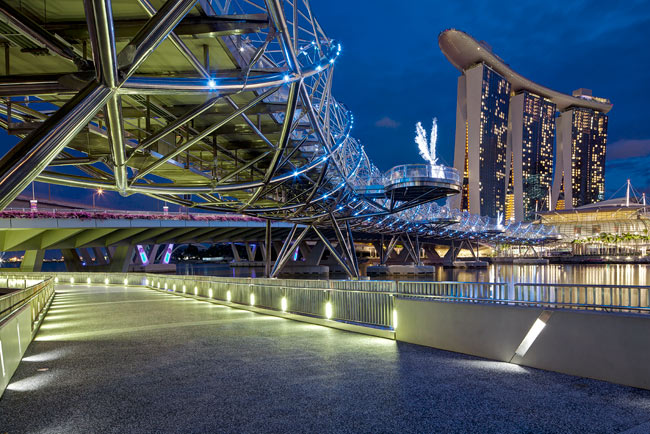 BELOW THE HELIX BRIDGE - This has to be one of the most remarkable and inventive examples of civil engineering I have seen to date. The Helix Bridge is based on DNA, spiraling around a central walkway. Made entirely of stainless steel, the structure is lit changing LED lights that change from blue to magenta each night. The iconic Marina Bay Sands Hotel makes such a great focal point at the end of the bridge.

TECH - This was again a manual exposure blend, just to gain control of the lights on the walkway that became excessively blown out. Dusk lasts around 10mins in Singapore, as its so close to the equator. The 'blue' hour needs some serious thought to get the most out of it, so after this shot I ran up top to get a second shot... 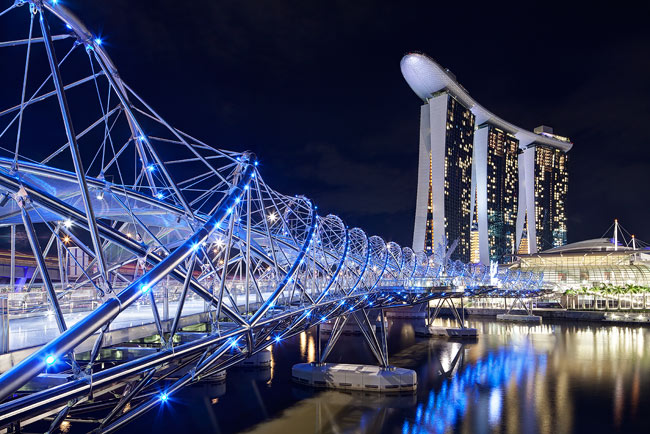 ON THE HELIX BRIDGE - See what I mean? Darkness beckons very quickly. At dusk, the bridge becomes very busy very quickly, so picking the moment to get a shot without 'ghosts' takes a little time. The shape of the bridge can be seen here in all its splendour, with the cross bracing linking the steel like an elaborate spider web.

TECH - There is just enough blue in the sky to retain a sense of dusk but only just. I had to work very hard every evening, but I learned to relax in the end as there were plenty of opportunities to get stunning images at night time as well. This blend was just to control the lighting on the waterfront. 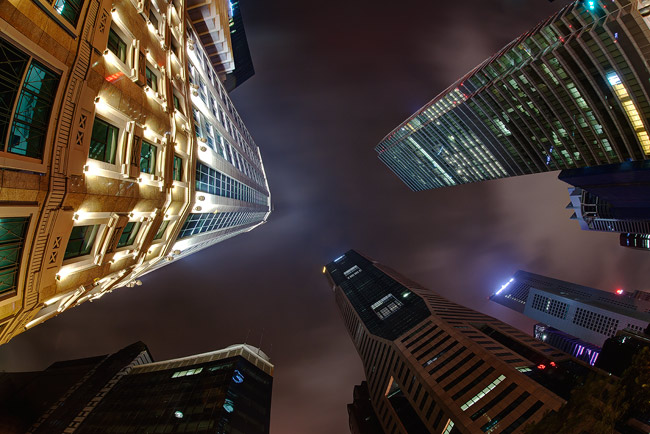 FISHEYE FUN - I have been using the remarkable Sigma 15mm f2.8 fisheye for the last few months with unbelievable sucess. I love lens so much, that I couldn't wait to photograph tower blocks in the Financial District. The field of view is enormous and the quality of the optic, even wide open, is really good. It features heavily in my portfolio and has become a true favourite.

TECH - I was standing outside the Raffles Place underground station at around midnight when this was taken. Singapore does not suffer from sodium orange lighting, so a small adjustment to colour balance turns the sky magenta without losing the colours of the tower blocks themselves. This is a single shot and what I like about it is the cinematic almost drawn look of the subject. 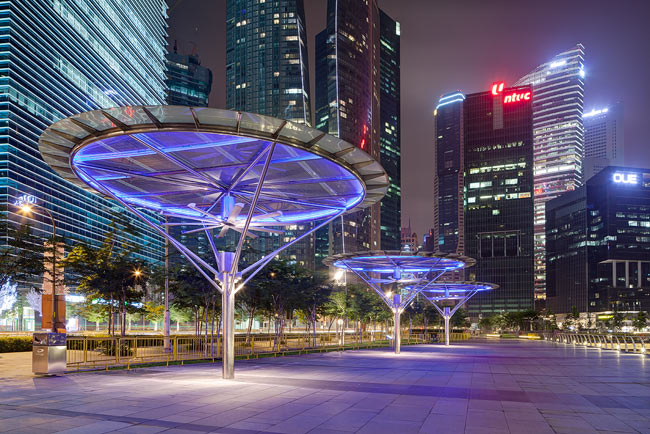 VENTING OFF - Yes thats exactly what they are - vents. The small fans spin round as heat rises from the tubes below, dissapating it into the night air. Once again, this shows us the example of clever engineering, by turning something functional into the thing of elegance. Singapore is so well lit, the colours often complementary and beautifully soft.

TECH - as before, I toyed with the idea of getting a person or a couple in the scene to the right, but after acosting a well dressed pair to assist my image, the result looked contrived so they were ommitted. I tried shooting various characters by pushing the ISO to capture movement, without their knowing, but nothing worked at all. Despite my attempts, the emptiness works just as well.