Unfathomable Facebook I have two Facebook pages, a personal page and a business page. In order to become part of my personal page I have to have met you face-to-face, that's my criteria, it's nothing personal. The great thing about a business page is that no one from your own personal Facebook page can interact unless they join it separately, by liking the page. Past attempts at Facebook jumbled my personal life and my business world together, so with two separate logins I can now keep both entities very much apart. All I have to do is share the content I produce on my business page to my personal page and all my friends can keep up-to-date with my adventures abroad. Far better than 'that's a shit picture, you twat 😛' and other landmark comments of literary ninjutsu.

Popular My ArseI have never been particularly popular, I was never that popular in school. I fixed my bike, I kept my head down. I don't think I've ever had that magnetism that other people or artists seem to obtain. For me it's always been about bloody-minded will and a major effort than anything else, and sadly it remains the same. This is certainly the reason why I never get too entangled in the arts as I dont understand  it, preferring to spend my time expending my energy within the world of photographic business. It's always so bloody unfathomable. For many, social networking becomes a popularity barometer, as much as it is communication tool, and for the first time this week, I felt what its like to be popular, in a huge way.

The image above, from Kirkjufoss in Iceland, has reached over 119,000 people within the space of three days. It's has had over 2500 shares, nearly 2000 likes, thats more than 100 times anything I have ever achieved. The Likes to my business page have doubled in less than 48 hours. I don't doubt that this is my finest social networking hour, my '15 minutes' of social networking fame, destined to sent back into obscurity. For some inexplicable reason, this image has identified with everybody in a way that I cannot perceive. Do I like it? Of course I do, its killer, but I still think I have produced far better aurora images over the last three years. 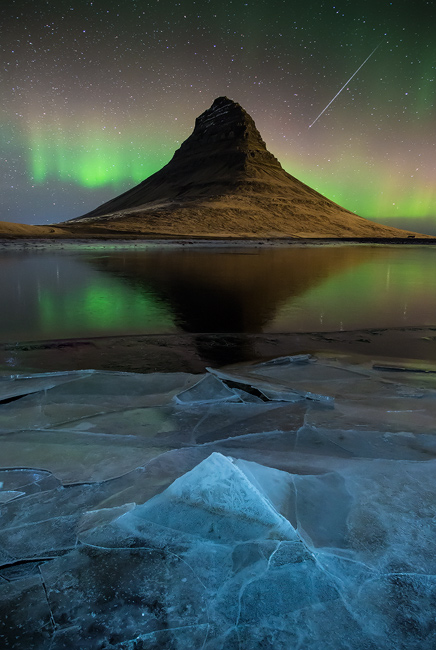 This second image was an absolute stroke of luck, a focus stack of five images. Knowing my past track record, I would have shot the meteor when focused on the ice, but him upstairs cut me some slack for once. It represents compicated technique, timing camera technology I coundnt have dreamed possible five years ago. Photographing the meteor in exactly the right place, especially whilst constructing a creative image, represents a far greater achievement. Greater appeal? Obviously not.

More Perfect Timing? Perhaps it was the timing... the posting time. When did I post this picture? On Sunday night, at 8 PM, on a wet and windy evening. Everybody was glancing at the telly, laptop on knees, phone fiddling, iPads, and flipping the lists inside social networking apps, to reduce the winter boredom. I posted a few more images that I believe are equally strong this week, but the enthusiasm seems to be waning, especially on Thursday. Christmas do's? Early nights? Perhaps... That's the strange world of 'going 82% viral' and statistical accolade Facebook has annointed me with. You're on the inside looking out whereas others are on the outside looking in - two very different concepts. I don't think I will ever have another image that is this popular again on the Internet.

So, back to earth, the processing, keywording, adding captions, sending work out to clients, and generally keeping the business flowing. Facebook is a buzz alright, but that's about it, or is it? Who knows, just one of those 1400 likes could come on a workshop in the future, could be a future business contact, could even buy a print (shock horror), that's why we do it, that and sharing the photo-love and making the world go round. I don't ever think there is a way to quantify the intentions of an online populace. For now, I will stay happy in the giddy confusion of my finest Facebook moment.