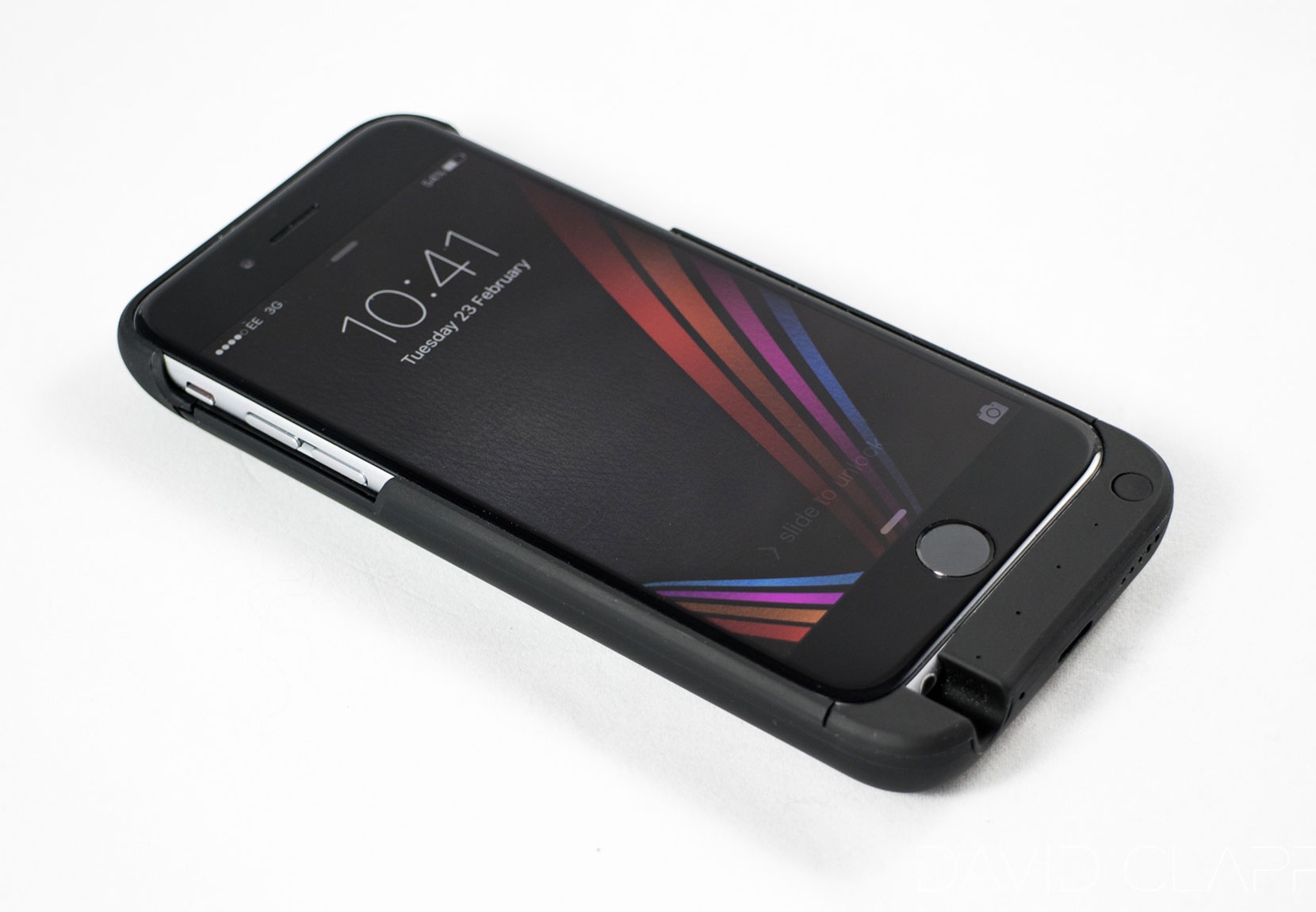 I have a new iPhone 6s, bought last week. I haven’t charged it up since Friday night. Today it’s Wednesday and it finally went flat this morning – that’s four and a half days of use and standby. If like me you run a business from beaches, misty forests, airports and lengthy journeys on foreign public transport, you’ll know the inconvenience a flat mobile phone can cause. So for all those Apple fans out there, I can conclude the 6s has better life than my old 5s, that is true, but that’s not the reason it lasted so long this week. I bought a charging case from Amazon, an alternative to the popular Mophie Juice Pack series, an unknown brand at a great price and it completely kicks ass. 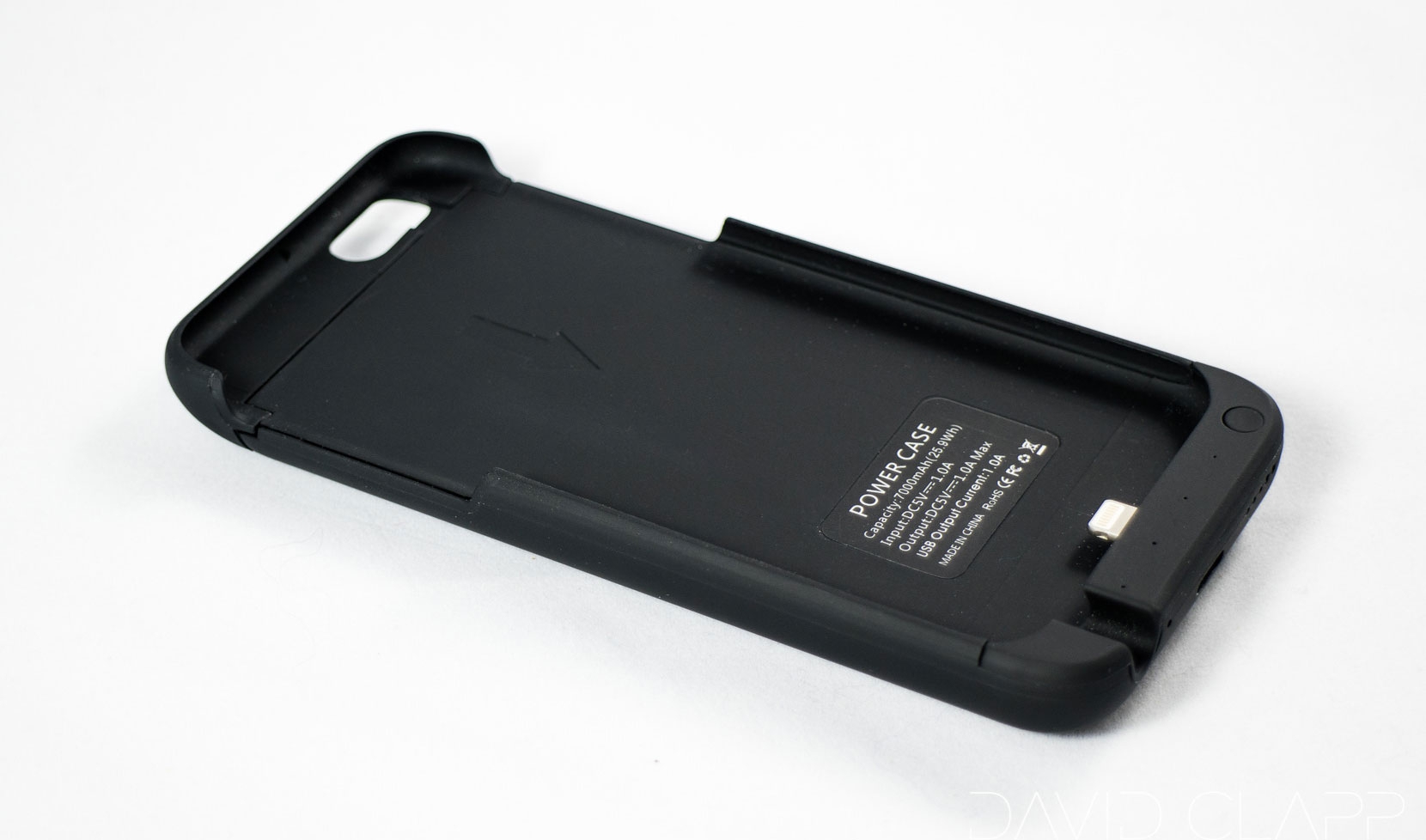 I have never been a fan of a separate charging block. It’s more clobber, more wires and something else to leave at home on the kitchen table or disappear between the car seats. I had a Mophie Juice Pack on the 5 and I have to say it did me proud. It not only protected the phone but I could get another full charge out of it, a very convenient combination. After three hard years, the batteries on both the MJP and the 5 were at the end of their tether so I replaced the phone last week. I went straight to Mophie to look at the options but I wasnt there long and after half an hour of looking around on Amazon I found this remarkable alternative. 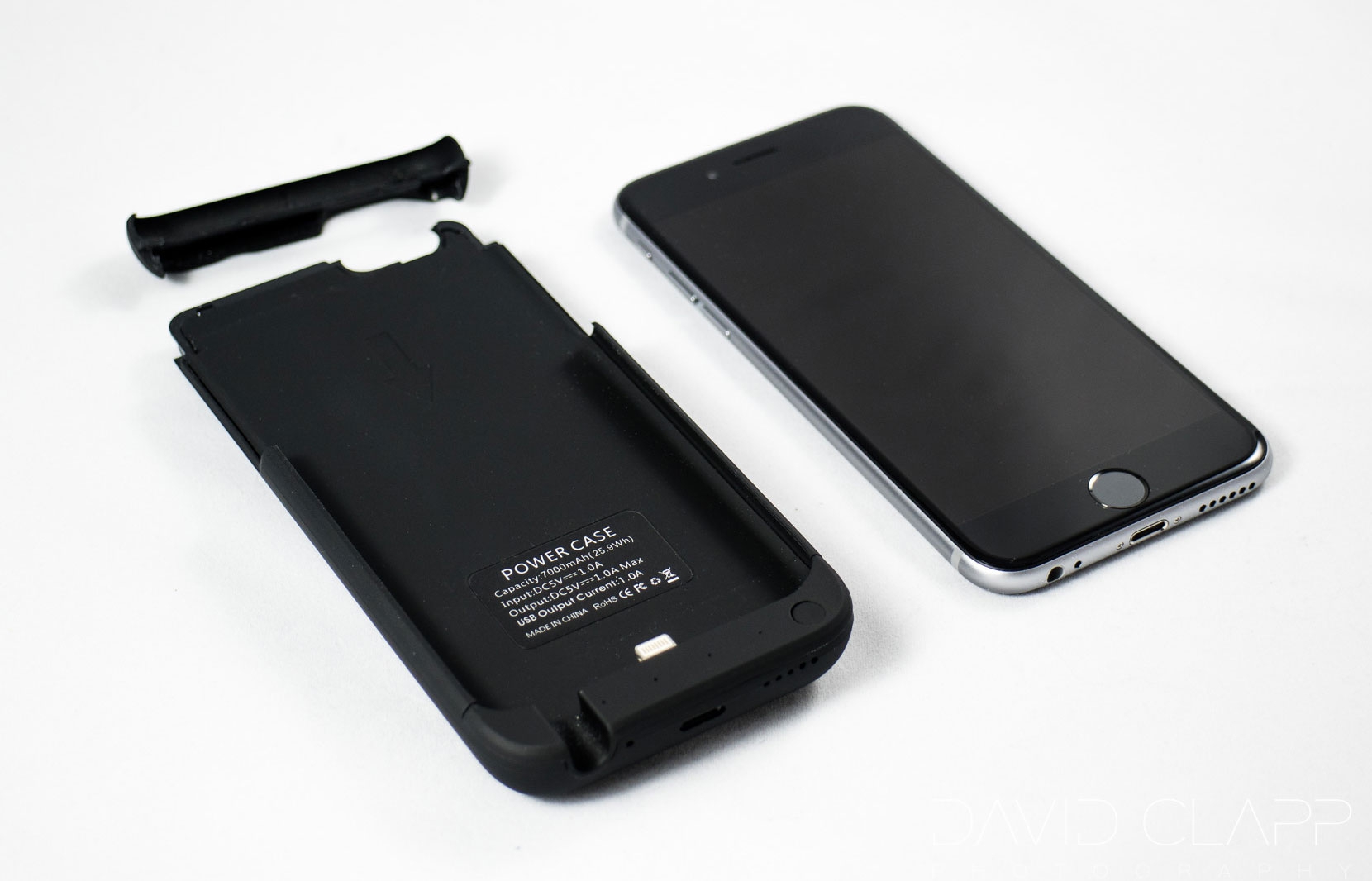 The Powercase is a step up in milliamp hours form the last one, which was just 2500mah. They come in a variety of sizes but I bought the biggest one I could – 7000mah. The advert claimed that firstly the case could get 2-3 full charges out of it, which was tempting enough. Secondly it didn’t use the irritating Micro USB connector that the Mophie sported. It uses the standard Apple connector. Thirdly it has a USB out, so you can charge other phones and USB devices from the case. Fourthly, it even has a built in stand! At £39.99 I was sold.

The top of the case pulls off and the phone slides into the case, pushing the Apple connector into position. This firmly holds the phone inside. The build is precision, the phone fits snuggly. The buttons on the phone remain accessible, but more importantly the headphone socket is too. This was a massive issue with the MJP I owned last time and it used to drive me mad when trying to connect Apple headphone to make hands free calls. You needed a small headphone extension cable; that I lost within the month. This open design is far better. 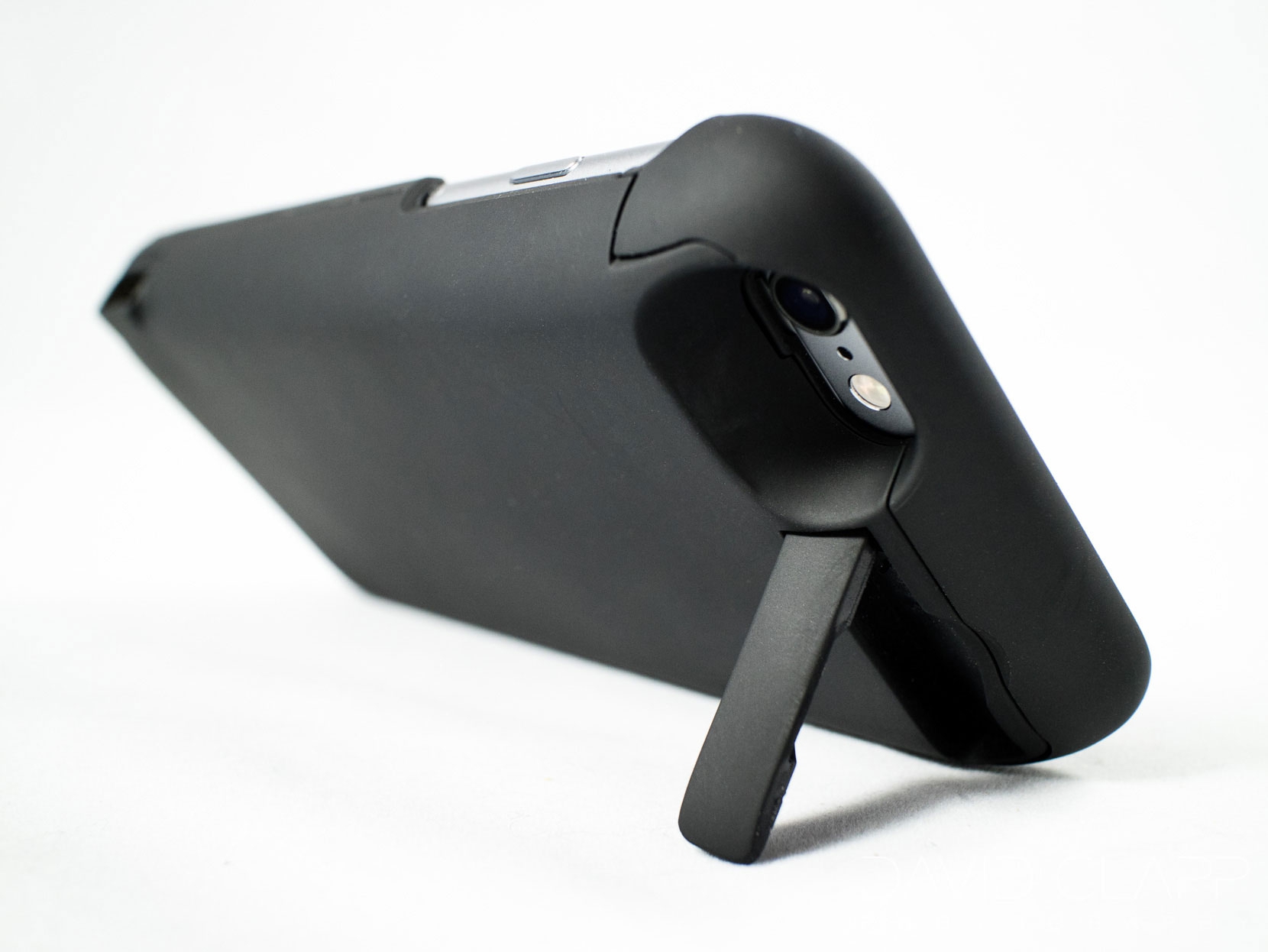 Operation is straightforward. There is a button on the case that when pressed convinces the phone its plugged into the mains. Four stylish blue LED lights switch on and the phone charges the case. Although untested, I plugged my other halfs new iPhone 5 Hand-me-down Edition into the case and it charges it at the same time. 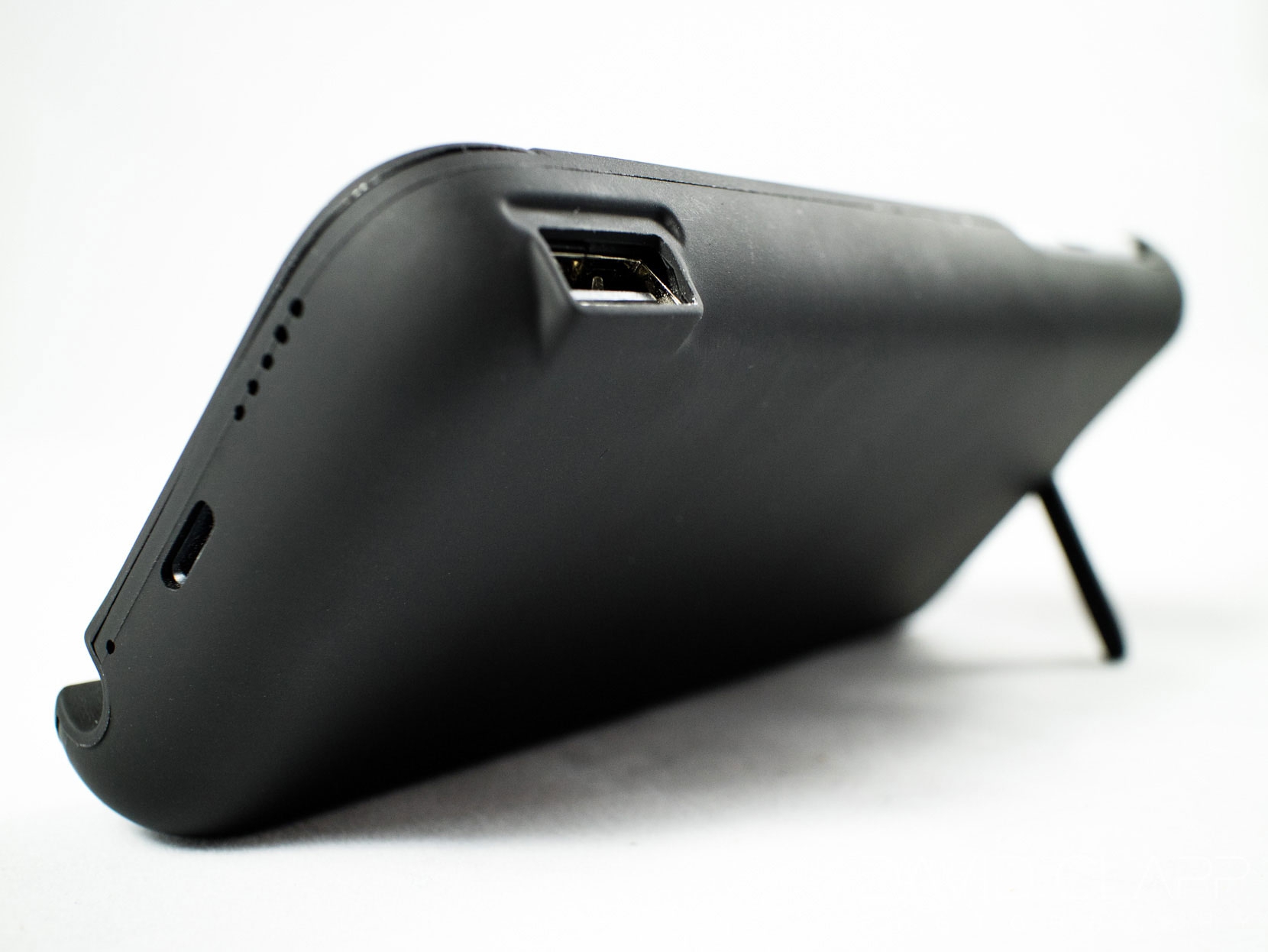 The biggest issue with charging cases is their limited capacity. Smaller capacity cases are often not worth buying. Then your phone battery starts to fade, the case can only get the phone back up to 70% before it too goes flat, which often isn’t enough to last the day. Well I am pleased to report that the 7000mah case managed to charge my case a full three times in those four days of sporadic usage and up to 27% on an attempted fourth charge. This is going to be great for travelling.

Finally, the design of the case has been really well thought out. The USB socket never gets in the way, perhaps a little if you hold the phone in your right hand. The stand is recessed so you don’t feel it when making calls. The surface is smooth yet with just enough friction to keep it confidently in the hand and all the buttons / ports and most importantly the torch and camera is accessible and free from vignetting. My only gripe is the weight, the 6s and case are a heavier combination than before, but I am getting used to it. Maybe a slightly lower capacity case would make it easier in the hand, but I’ll trade that for the day-and-a-half extra up-time the Powercase will deliver.

It’s a wonderful addition to the photographer and tech enthusiast needing long periods of power on the move.

Finally thanks to Joe at The Dog Treat Company for letting me use his light tent (have a look at his website, it's brilliant), for making great 'cwoffee' and doubling up with me for yesterdays klller shopping channel comedy routine - "AND ITS ONLY THURDY NYNE NYNEE NINE?! OH MWY GWAD!'