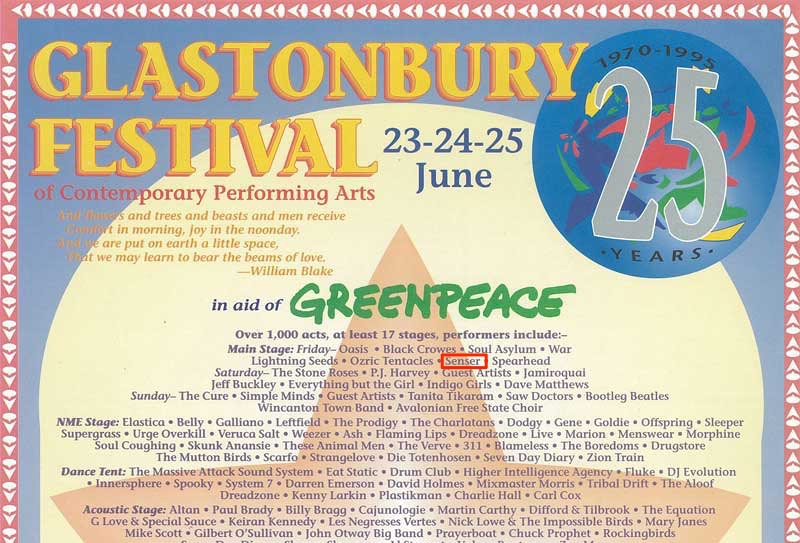 As usual, every year I miss the online ticket frenzy of Glastonbury. I have to say that the initial slap of idiocy always hits me pretty hard and I then try to make myself feel glad I am not there. We all know the UK weather can certainly put a ‘damper’ on the farm infrastructure, but that uncontrollable aspect aside, this article is about line up, which in my opinion is has never been worse.

I have watched it all day Friday and Saturday, and if you had popped in for tea, you would have seen my face looking back at you in frozen quizzical disbelief. In the 1990’s I was a guitar tech for a rather successful rock / rap act called ‘Sensor’ and for three years I got backstage passes at Glastonbury and subsequently got to see some of the worlds greatest bands from a privileged viewpoint. We’re talking the era of Rage Against the Machine, Radiohead, Pulp, Blur, The Prodigy, Orbital… I even got to see the rise of Oasis, all from stage left.

Now before you start thinking I’m going to launch into a mature almost pushing fifty ‘music-aint-like-it-used-to-be-in-my-day’ moan, I want you to know I have never stopped musically evolving. I regularly terrorise my friends (and sometimes workshop clients) with crafted Spotify Playlists of the filthiest dance music I can get my hands on. When I am not delving into electronics, I’m in orbit searching and learning from the compositionally sublime, attempting to bring this into my photography. I have always liked to challenge myself, not only to comprehend, learn and explore a heralded modern genius, but also to spend time analysing the legacy those in passing have left behind. An opened mind, without prejudice, any instruments, any era; everything from the jazz trumpet of Lee Morgan to the ambience of Brian Eno, to the sonic outbursts of Deathgrips, the insane G.Jones and then to the classically sublime Vaughan Williams  - I look for the very best soundtracks to complement my life - I don’t care what it is.

Yet over the last two days I have literally had my life force drained watching BBC iPlayer, as a stream of spineless, soulless, peer-pleasing, risk assessed, bourgeoisie bands recite cutesy saccharin pop across those sacred summer fields of Worthy Farm. I am in absolute despair at what Emily Eavis has commissioned and conversely what Glastonbury Festival champions as the very best musical acts. Never has there been such a pacified corporate line up as 2019 and therefore such a polarised musical message.

I think if the stand-up prophet Bill Hicks hadn’t died so tragically young, the world would have been a far better place. “I want my rockstars dead! I want 'em to fucking play with one hand and put a gun to their head with the other” - what he is explaining so here is that at it’s very peak, music performance has to be explosive and also implosive - a catalytic progeny of extreme thinking and behaviour; a knife edge, unstable, but so exciting - or what’s the point?

The dire formulaic corporate monotony of this year’s industry-safe pop lineup literally drowns the entire festival’s historic ethos in a shitty chemical toilet. Main stage audiences seem catatonic; a hundred or so people are dancing up the front, whilst the other twenty eight thousand behind them are using Whatsapp. We scan the front row audience for smiles, but the seems entirely made up of blissed out city professionals. Is it now all about the status of being there than actually being there? 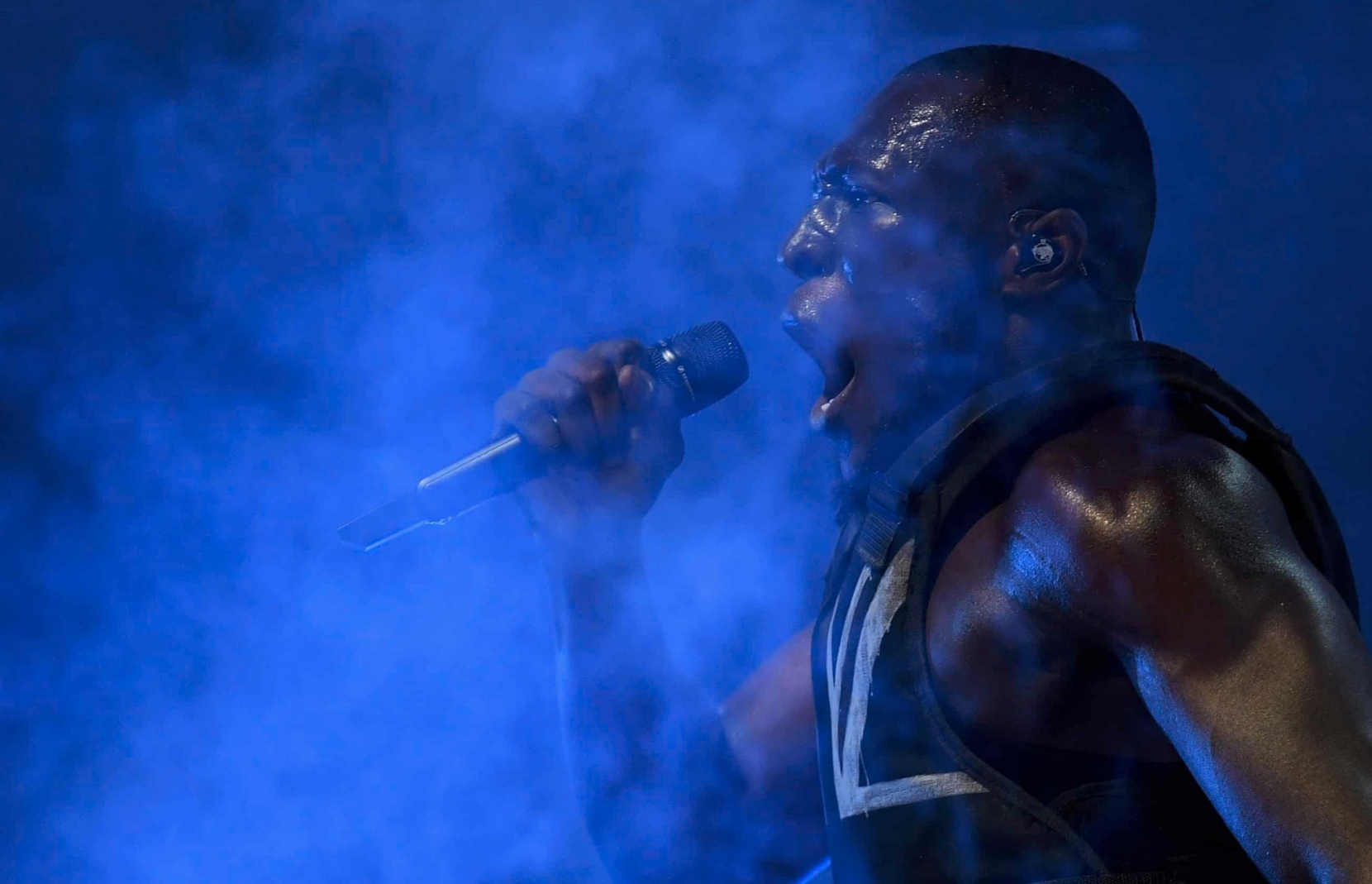 On paper, the main stage headliners appeared to be a bunch of recent and aged has-beens surrounding unlikely UK rap firework Stormzy. I love rap, the harder hitting and more political, the more provoking and contentious the better.  Despite his obvious crowd appeal, I found the performance  literally unwatchable. He just came across like a shouty ‘landan yoof’ covering his over-enthusiastic stage presence with hashtag lyrics (which basically means I think I have now concluded that I like my rap to be American only).

Jon Hopkins, an artist I love and revere for his impeccable immersive albums, never seems to come off that well live and despite spends the entire set looking super busy, noodling over Kaoss Pads, he always makes his masterpieces sound slightly worse than the originals.

Surprisingly, The Killers were great, despite two of the band members absent, Brandon Flowers giving everything, with the lyrical delivery absolutely spot on. They wisely performed a lot of their embryonic first album (let’s face it, the rest are second rate at best).

Another band I love, The Cure, who spellbound me in Germany in 1994, gave a washy performance, that proves they are creatively bankrupt yet well connected. Robert Smith now seems to have now turned into a tubby sunken mannequin, his struggling voice propped up by 80’s synthesisers.

Yet for me, the surprising stars of the weekend were the Chemical Brothers. Again, I was poised for recoil, but how wrong I was. It was an absolutely blinding set by the duo whose unfathomable departure from those seismic block rocking beats to the appalling lows of the ‘salmon dance’ had left us feeling they were a lost cause trapped inside and Apple advert. It’s as though they decided to take everything they once were and reintroduce it to us all over again, with remarkable effect, to some of the best visuals I have seen. The set list was impeccable, the pace driven with perfection and I was sat on the edge of the settee, desperate to be there. That’s the ticket, that’s the energy we need back. When Spotify went back online, I promptly went out and downloaded their latest album, heralded by the music press as a return to form, and promptly gave up on the third track. Oh well. 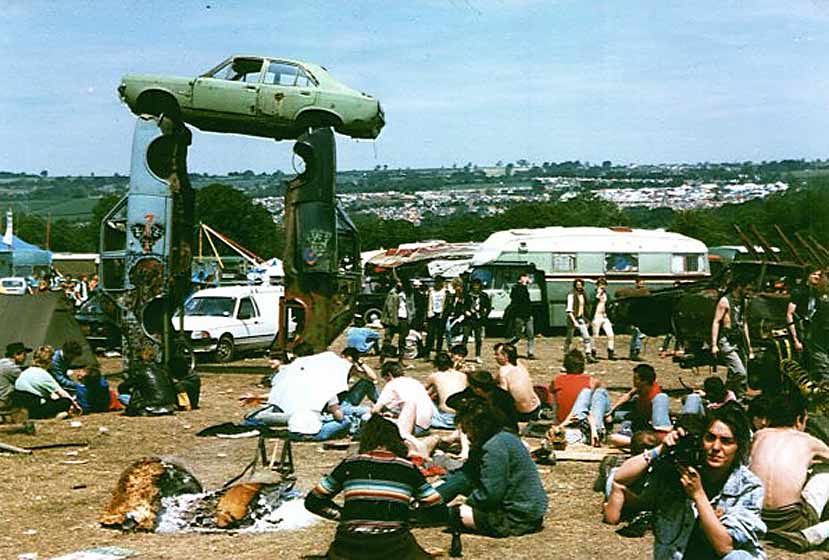 Despite peaks and troughs, big UK festivals still burn brightly, yet over the last ten years I am still struggling to get excited about Glastonbury in particular. There is a slew of unseen fun going on for sure; the tales I hear of untelevised eclectic experiences from friends who made it there, still makes the draw of a festival entirely discernible, but the polarised quality of music line-up surely has to change. Shifting the audience to a pop focused acts like the insufferable Maggie Rogers, Lewis Capaldi etc away from music that stirs the soul, music from any era, is surely a terrible mistake.

I do have the deepest respect for the festival, which is why I was compelled to write this - I can fully appreciate the organisation needed to create a ‘popup city’ and the alternative amusements on offer, as I worked there for three years. Yet my personal memories, watching twenty five thousand people going completely nuts shouting ‘fuck you I wont do what you tell me’, with similar events happening on every stage, all day, seems an all too distant memory in comparison to today’s apathetic corporate best. No doubt, Ed Sheeran will be headlining next year's germ free, middle class Glastonbury.